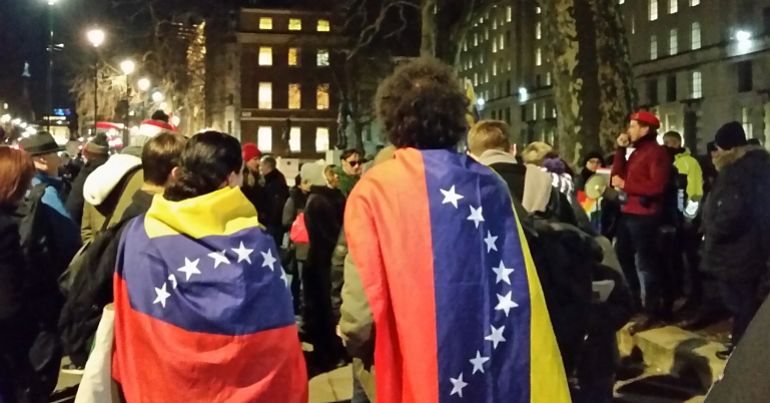 Named the Embassy Protection Collective, scores of activists are currently occupying the Venezuelan embassy in Washington DC at the invitation of the Venezuelan government. The collective, which includes prominent US organisers and journalists, is resisting threats from the US-backed Venezuelan opposition to seize the embassy illegally.

Venezuelan diplomats were given “a two-week ultimatum to vacate the embassy”, according to MintPress News, after the Organisation of American States (OAS) violated its own charter and recognised opposition leader Juan Guaidó’s parallel government.

In response, the Venezuelan government entrusted its embassy’s keys to US activists to resist attempts by Guaidó’s team to take over the embassy. The Embassy Protection Collective – formed by the likes of CODEPINK, Popular Resistance and Act Now to Stop War – has since been sleeping in the embassy to avoid the possible takeover attempt. They’ve been organising live music, meals, and democratic meetings on how to proceed.

The collective is defending international law regarding the integrity of the Venezuelan state. According to Article 22 of the Vienna Convention:

In other words, the US government cannot under any circumstances enter – or allow entry to – the embassy of a sovereign nation against its will.

As The Canary has previously reported, however, the US has consistently violated international law throughout its attempts to overthrow the Venezuelan government. US special envoy to Venezuela Elliott Abrams nonetheless claims that it is the activists who are “clearly breaking the law”. Abrams, who has previously struggled to answer straightforward questions about the Venezuelan constitution, is a convicted war criminal.

What about international law? What gives a self-proclaimed president the right to take over the properties that belong to the government in power?

My government has no right to overthrow the government of another country. This is undermining the basic principle of democracy. Maduro was elected by 6 million people in Venezuela. Whether anybody likes Maduro or not, we need to respect the election.

Many of those staying in the embassy plan to stay there for as long as necessary, anticipating that US police might eventually try to kick them out. The US secret service and department for homeland security seem to have been threatening action for some days, though have not yet tried to enter the embassy.

The longer this resistance continues, the greater attention the activists will bring to Washington’s clear violations of international law. “We will not go out easily”, they claim – and they deserve our support.