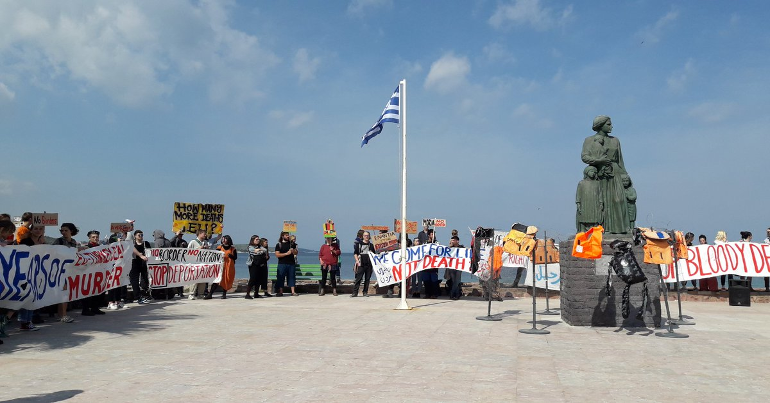 A Greek court acquitted over a hundred refugees on 9 May on the Greek island of Lesbos. Their trial was over in less than a day. The authorities arrested them in April 2018 when fascists attacked their protest camp.

The refugees had been holding an occupation of the central square of Mytilene in Lesbos. They were protesting against the conditions at the state-run Moria detention camp.

Legal NGO HIAS in Greece provided lawyers for the some of the defendants. In a statement seen by The Canary, HIAS wrote:

In April 2018, after an Afghan refugee from Moria refugee camp died due to insufficient provision of health services, a group of approximately 200 refugees from Moria gathered in Sappho Square, to protest the insufficient medical services and poor living conditions in the camp, the largest in Greece.

The attack happened on 22 April 2018. Legal Centre Lesvos (LCL) was another firm representing defendants in the trial. According to the LLC:

Roughly 200 fascists attacked the refugees and migrants, as well as those standing in solidarity with them, with projectiles.

during [the] attack by [the] far-right group against the protesting refugees, police tried to disband the refugees and eventually detained 120 refugees and two Greek citizens. There were 12 children among the detained refugees. On April 23, criminal charges were pressed against the detainees including illegal occupation of public property, revolt with the use of physical force and resistance.

Why weren’t the fascists arrested?

So why were the refugees arrested, and not the fascists?

While 26 people are now facing criminal charges related to the attack against the migrants, during the night not a single attacker was arrested. Only the 122 people facing trial today were arrested, after facing a night of racially motivated violence against them, which left many people, including migrants, journalists, and children injured.

An anti-racist week of action is currently being held on Lesbos in solidarity with the defendants.

2,754 refugees have arrived on Lesbos so far in 2019. Many of them are prevented from leaving the island by the EU’s containment policies. Access to the Greek mainland has been tightly controlled since the 2016 EU-Turkey deal. This has transformed the Aegean islands into what is effectively an open air prison for refugees. 7,000 refugees are currently on Lesbos, according to figures The Canary received from the UN Refugee Agency (UNHCR). The majority live in overcrowded and dangerous conditions in Moria.

In January, a 24-year-old Cameroonian man died in Moria, as temperatures dropped below freezing.

HIAS wrote after the verdict that “this decision warrants no celebrations”. Country director Vassilis Kerasiotis said:

The mere fact that 110 participants of a peaceful protest were tried in a court of justice, after suffering a racist attack and disproportionate use of violence by the police, is deeply concerning.

From the use of violence for disbandment of a peaceful protest to the criminal prosecution of the participants, all the decisions of the authorities pertaining to the case point towards criminalization of protest.

This case shows a continued policy of the police and courts of Lesvos, Greece of criminalizing migrants who protest against their imprisonment on the Greek Islands and the inhumane conditions in Moria camp, denying them their right to freedom of expression and freedom of assembly.

Greece’s north Aegean islands are one of the frontlines of Europe’s repressive border regime. The restrictions on movement from the islands to the mainland are intended to keep the crisis tucked away on the fringes of Europe. And the reason refugee protest is silenced seems to be because it draws attention to this sad reality.