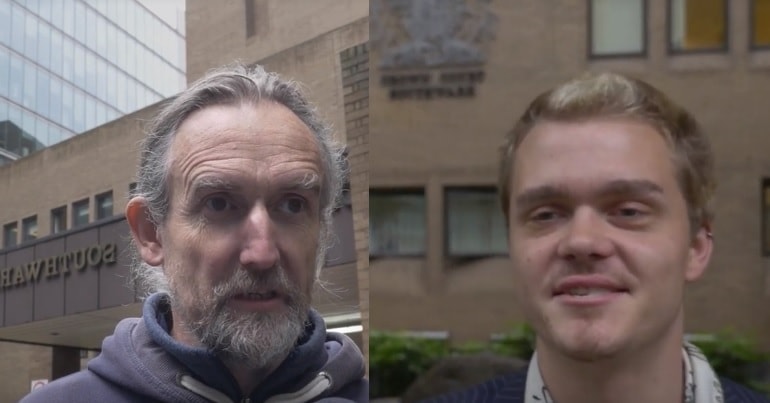 In 2016, Hallam and Durant engaged in a series of direct actions that included a hunger strike and some “chalk spray on stone walls”, which amazingly resulted in KCL officially agreeing to divest from fossil fuels.

Hallam, speaking to Real Media outside of Southwark Crown Court on 9 May, said:

Anyone watching this video knows now, not only does direct action work, but it wins in a court of law in front of the British public.

The Intergovernmental Panel on Climate Change has said the world has less than 12 years to make dramatic reductions in greenhouse gas emissions in order to avoid the worst effects of the climate crisis.

But Hallam also called the trial “a complete travesty of justice” because he “wasn’t allowed to talk about Climate Change at all”.

I was stopped 15 times by the judge from talking about climate change.

The whole thing was a farce. There’s [spray] chalk on the wall. There’s a much bigger issue at hand.

The Crown Prosecution Service brought the charges two years after KCL had already agreed to the climate activists’ demands and withdrawn its disciplinary procedures against them. Prosecutors claimed that Hallam and Duran were responsible for £7,000 of damages, a charge the jury ultimately rejected.

Despite the judge’s apparent attempts to sabotage their defence, Hallam said that “people know” about the climate crisis, insisting “it’s out, isn’t it?”.

Hallam is a co-founder of Extinction Rebellion. He has been trying to practise “theories on radical mobilisation”, which he’s investigating as part of his PhD at KCL.

Resisting the climate crisis by challenging the law

It’s all hands on deck. It really is. So I’m going to go out and break the law again tomorrow. What more can I say? … Let’s just fucking get on with it.