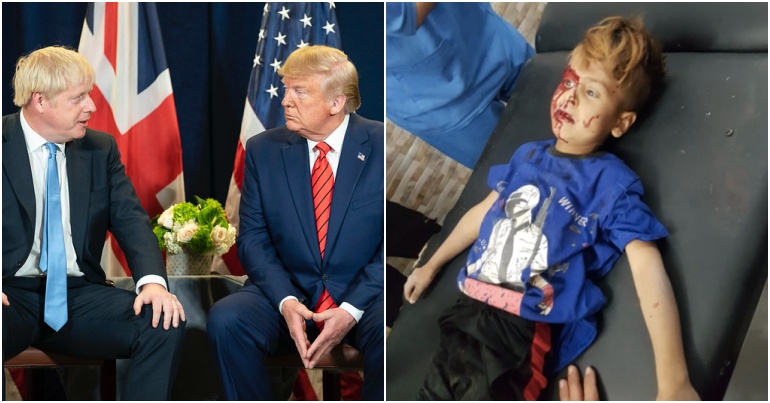 But these moves ignore the blatant hypocrisy of both governments in this crisis and don’t go nearly far enough. The death toll’s rising and, as the Rojava Information Centre (RIC) noted, Rojava faces a “humanitarian crisis”.

On 6 October, Donald Trump agreed to withdraw US troops from Rojava, the region that led the way in defeating Daesh (Isis/Isil). This move followed months of Turkish threats to invade the area and crush its progressive revolution. Following this, Turkey invaded.

As RIC noted on 14 October, the Kurdish-led Syrian Democratic Forces (SDF) entered “a military agreement with the Syrian government and Russia”. This was a direct result of the “withdrawal of US forces”.

Here on the ground in north east Syria, we’ve seen first hand the effects of the Turkish war machine on the civilian population here. We’ve seen the shells landing on the neighbourhoods around us, we’ve seen colleagues in the press wounded and losing their lives in these shellings. We know what the cost of this is.

The RIC stressed there’s now a “humanitarian crisis” in Rojava. So far there have been:

75 civilian deaths and 450 injured civilians. …[And] there are a quarter of a million displaced people in north east Syria.

As RIC also noted on 14 October, all international NGOs “evacuated their international staff”.  This included the World Health Organisation (WHO). Following the military agreement, many of the international media also left the area.

Trump issued a statement claiming he’d “soon” issue an order to impose economic sanctions on Turkey. But these sanctions relate to an invasion that he actually gave the green light to.

Meanwhile in the UK, as a press release from Campaign Against Arms Trade (CAAT) noted, the government announced there’ll:

be no further export licences to Turkey that could be used in the ongoing invasion of North Syria. This follows moves to curb arms sales by other European Governments, as well as an announcement that it will review existing licences.

The UK government takes its arm export control responsibilities very seriously and in this case, of course, we will keep our defence exports to Turkey under very careful and continual review.

But as CAAT stresses, the UK curb “must be thorough and also affect existing licences”. Because since Erdoğan came to power in 2014, the UK has licensed £1.1bn worth of arms to Turkey. These include drones, tanks, and missiles. As CAAT said, this:

Despite its authoritarian domestic policy, and increasingly aggressive foreign policy, the Erdoğan regime in Turkey is among the world’s largest recipients of UK weapons.

Too little. Too late.

Responding to this news, McClure told The Canary:

We know that the British government, and other governments, have quite extensive arms interests with the Turkish state. We saw this in the time of Afrin. And we see now that these atrocities have started happening and, now that Turkey has occupied part of north east Syria, that the regime is forcing a demographic change – if not ethnic cleansing. The people of this region have been forced to invite the regime here after seven or eight years of autonomy. And now the international powers get into action.

It’s too late, now the die has been cast. And also too little.

The UK Government has clearly been shamed into this, but the truth is that it should never have been arming and supporting President Erdoğan and his authoritarian regime in the first place.

This change cannot only be limited to future arms sales, it must also affect the hundreds of millions of pounds worth of arms that have been licensed over recent years. As long as those licences are still valid then those arms can be used.

“Now is not the time for symbols”

But there’s another significant reason this move is too late, as McClure explained:

It’s very clear that Turkey’s moving towards complete self-sufficiency in the arms trade – it’s not reliant on the west. The purchase of a missile system from Russia moved them further from the nexus of the western arms trade.

So, of course, while these things are important, perhaps their value is more symbolic. Turkey already has bombs, planes, tanks enough and is producing enough, and getting them from enough other sources, not to need them from the west.

Rojava is a multi-ethnic but mostly Kurdish part of Syria. The ongoing revolution in Rojava is based on “the values of women’s freedom, direct democracy, and creating a collective ecological society. Erdoğan sees this revolution as a threat to his own dictatorial [Turkish] nationalism and wants to destroy it”.

Rojava also played a key role in defeating Daesh in Syria, gaining limited support from the west in the process. The progressive Kurdish-led YPG and YPJ militias are at the heart of the SDF. Yet Turkey classifies these groups as terrorist organisations, with no valid justification. The YPG and YPJ are currently defending Rojava:

In times of darkness, suffering and injustice, the People's and Women's Protection Units are consolation and bring power and hope to the people.

As RIC noted, since the invasion, Daesh fighters have now reportedly joined Turkish-led forces and Daesh families have escaped from refugee camps.

In 2018, Turkey and its allies invaded and occupied Rojava’s Afrin region. As The Canary previously reported, this led to “extensive looting, “widespread human rights violations”, and war crimes.” There are already harrowing reports of violent murder and rape in the area following this invasion.

This should also mark a turning point in UK foreign policy in Turkey. In 2018 Turkish forces bombed Afrin and it made no difference to arms sales or military collaboration. If this move is to be more than symbolic then there can be no return to business-as-usual. It’s time that the rights of Kurdish people were finally put ahead of arms company profits.

Given the gravity of attacks in Rojava, Trump’s weak words and a half baked arms embargo from the UK are too little, too late. Rojava and Kurdish people deserve so much more. Especially from countries that are so complicit in the ongoing horrors they face.