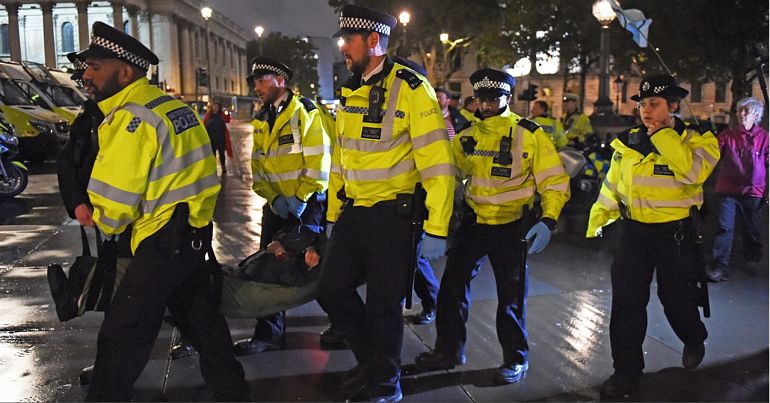 Police are facing growing criticism and resistance over a “heavy-handed” London-wide ban on climate crisis protests.

The Metropolitan Police imposed conditions under Section 14 of the Public Order Act 1986, requiring any protest assembly in the capital to cease by 9pm on Monday. It claimed this was to “prevent serious disruption to the life of the community”. As of 5pm on Monday, police said there had been 1,445 arrests in connection with the eight days of Extinction Rebellion (XR) climate protests in London. Officers also made more than 90 arrests on Monday as protesters targeted the City of London, the capital’s financial district. Police moved in to clear Trafalgar Square on Monday evening, telling protesters to leave the site by 9pm or risk arrest.

Last night I was arrested in Trafalgar Square while defending the right to peaceful public protest. That right is central to a functioning democracy. Yesterday, public protest was banned throughout our capital city. This is a completely unjustified and disproportionate measure.

Some highlighted the significance of police making their move as activists set their sights on “the centres of power and capital”:

2/ It is also hardly a surprise that this started on the night after we began protesting the banks – the engine houses fuelling and accelerating climate catastrophe. https://t.co/xrb0M8HFY2

6/ It does not matter if individual police officers are sympathetic to @ExtinctionR's cause. When the order comes to protect the centres of power and capital, that is what they will have to do. That is why the police, as an institution, exists.

This is interesting: it makes the link, not really picked up elsewhere in press reports, that the police's sudden, unexpected blanket ban on #ExtinctionRebellion protests came immediately after activists disrupted London's financial district. https://t.co/Wh17yiyHvF

On Tuesday, Metropolitan Police deputy assistant commissioner Laurence Taylor argued that the protest ban was “entirely proportionate and reasonable”. He also said that using section 14 to limit the location and duration of protest action was “not unusual at all”, and that the measures had been applied during demonstrations over the jailing of far-right figure Stephen Yaxley-Lennon (aka Tommy Robinson) in August.

This highly controversial comparison to one side, the Network for Police Monitoring (Netpol) highlighted that the police were specifically targeting XR:

"We banned the movement, not the protests" isn't somehow better https://t.co/4LHW3abNcS

Under what power? You do NOT have to give your personal details to the police. If you refuse to comply with this, are officers blocking access to the bridge? What an extraordinary day. https://t.co/O5ZnyLhcHr

Shadow home secretary Diane Abbott said: “This ban is completely contrary to Britain’s long-held traditions of policing by consent, freedom of speech, and the right to protest.” Shadow policing and crime minister Louise Haigh, meanwhile, stated: “This is a grotesque overreaction and extremely worrying attack on basic civil liberties.” Others also spoke out:

We strongly condemn the police ban on @XRebellionUK protests in London.

The real criminals are the fossil fuel executives burning the planet for profit, not peaceful protestors. Solidarity ✊🌹 https://t.co/GILJU7umpz

*whole city – this isn’t Hong Kong but they are doing their best to make London look like it.

A terrible sight in a democracy

This is the work of Priti Pitel's Home Office

On Twitter, XR’s London branch labelled the clearing of protesters from the square as “an outrage”. It also tweeted: “Today, an unprecedented, political, decision has been taken to shut down peaceful protest calling out the government for inaction in the face of crisis.”

Police are clearing peaceful protest in Trafalgar & Vauxhall. They are back-tracking on promises made &, MEPs say, in contravention of UK law, in the national square.

This is an emergency, and an outrage. The police must respect the law. This is a democracy#ExtinctionRebellion pic.twitter.com/vJf7cTLJ78

We believe the section 14 Order is invalid – that it amounts to a huge overreach of the statutory power – and likely reflects the enormous political pressure the Met is under.

Along with others, @GoodLawProject is exploring how best to bring those challenges. We hope to make an announcement shortly.

Human rights lawyer Adam Wagner, meanwhile, called the move “draconian and extremely heavy-handed”. He tweeted: “We have a right to free speech under article 10 and to free assembly under article 11 of the (annex to the) Human Rights Act. These can only be interfered with if the interference is lawful and proportionate. I think the police may have gone too far here.”

Allan Hogarth, head of advocacy and programmes at Amnesty International UK, said: “Imposing a blanket ban on Extinction Rebellion protests is an unlawful restriction on the rights to freedom of expression and peaceful assembly… This is a heavy-handed and unacceptable move by the Metropolitan Police. Certain disruption to ordinary life for protesting is natural, and it needs to be tolerated.”

It also seems that activists are already considering legal action:

Lawyers for Extinction Rebellion have issued the Metropolitan Police with a "Letter before Action", the first stage towards a judicial review of the police's wholly disproportionate blanket ban on XR activists' right to protest

XR protests, meanwhile, are continuing in London despite police ordering activists to end their gatherings across the capital or risk arrest. On Tuesday morning, for example, XR co-founder Gail Bradbrook was filmed climbing the entrance to the Department for Transport in Westminster. Other protesters had glued themselves to the building.

Meanwhile, police dealt with a road block near Baker Street and told a number of protesters camped in Vauxhall Pleasure Gardens to move on or risk arrest. Activists were also seen gathering at Millbank and planned a rally back at Trafalgar Square at midday.

⏰ We have no time to waste in tackling the climate crisis. We can’t ring 999 & ask the ambulance to come in 10yrs

🔥When your house is on fire you don’t turn off the alarm. Peaceful protest is a human right pic.twitter.com/bEButE3Bvh

While the police try to work out if they are going to arrest us or not, @sianberry speaks to the crowd about our right to peacefully assemble and protest pic.twitter.com/ac4JETj91K

Under the current order, any assembly – classed as a gathering of two or more people – linked to Extinction Rebellion in London is unlawful. But with critics speaking loudly and clearly against the move, that may not be the case for long.