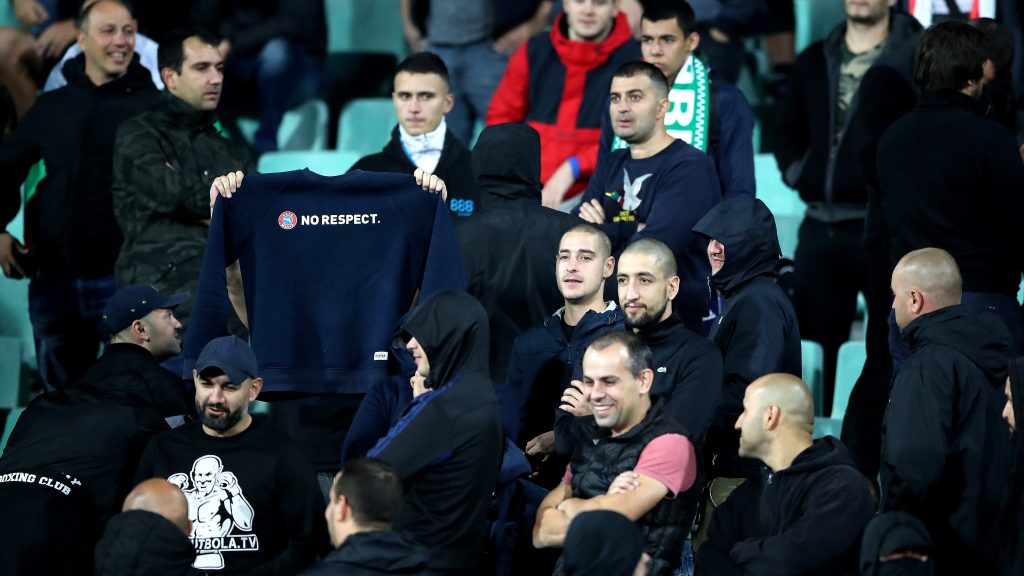 On 14 October, England football players were subjected to “abhorrent racist chanting” during a Euro 2020 qualifier in Sofia. But the response has been strong. MPs, for example, have called on European football’s governing body UEFA to come down hard on Bulgaria, with Labour calling for the “harshest possible punishment”.

England were barely troubled during the routine 6-0 victory over their hosts, but the game was overshadowed by racist behaviour in the stands (including monkey chants and Nazi salutes). This forced the match to be halted twice in the first half and fans were warned about their conduct. The following day, Bulgaria’s prime minister called for the Bulgaria Football Union’s president to quit, and he soon obliged.

“The world is watching”

Labour leader Jeremy Corbyn spoke out about the behaviour, saying:

UEFA must step up and take decisive action to stamp racism out of football.

Bulgaria, and any country whose fans racially abuse players at games, must forfeit fixtures, face point deductions and if necessary be expelled from competing.

Solidarity with the England players who faced appalling racism tonight.

UEFA needs to do far more to tackle this kind of abuse.#BULENG https://t.co/OLp8uOmFYS

Shadow sports minister Rosena Allin-Khan offered “absolute solidarity” with England’s players, and said she had spoken to the FA after the match.

She said: “Tonight, I’ve had a conversation with the FA Chief Exec and made clear that the England team has my full support. UEFA must come down hard on racism – a generation of players and fans are watching. Time to set an example.”

And speaking in parliament, she stressed:

This abuse must be stamped out – no one should have to arrive at work to be subjected to any form of discrimination. Why are our players still being subjected to this?

UEFA has a duty to act here, the world is watching. A fine is not enough, so I am asking our Government to ensure that we are backing up the FA to seek the harshest possible punishment. Stadium bans are a must, forfeiting matches and expulsion from tournaments must not be ruled out. Enough is enough. The time to act is now.

There can be no place for racism in football – you have a country behind you tonight.

We need fans, clubs, press and politicians to join in solidarity! pic.twitter.com/t4VP1iCtJh

.@England players faced racism with dignity last night but it is completely unacceptable.

Today I asked Ministers what they were doing to give meaning to the words 'zero tolerance' on racism in football and across sport.

They don’t need to take that no more. They’ve got their own platforms, now they’ve got the protocol to stick to. This is a great day, I feel really good watching this.

We’ve only got to this point because of demands for change, however. So the ongoing calls for firm action against racism are much needed.