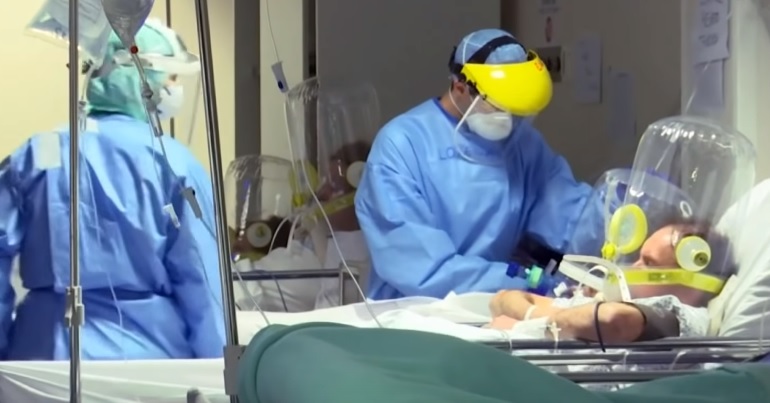 Italy is suffering through one of the worst outbreaks of the new coronavirus (Covid-19). By 23 March, the country had reported 5,476 fatalities out of 59,138 confirmed infections. That’s a higher mortality rate than China, where the global outbreak first appeared.

As a result, Italy is now the recipient of support from other countries. But there’s a mind-blowing detail in that global response, one that should give many pause for thought.

As The Canary recently reported, Cuba has now sent doctors to Italy to assist with the outbreak. The medical professionals received a hero’s welcome as they arrived:

Doctors from Cuba arrive in Italy to help the fight against Covid-19.

Please keep these heroes, their families, and loved ones in your prayers 🙏🏽🤲🏽❤️ pic.twitter.com/idNnom8sXS

Cuba is not, however, the first country to offer support to Italy. Someone noted on Twitter that both Russia and China have also provided assistance to the country in its fight against coronavirus.

Russia sent its army to help Italy. Where is NATO?

Cuba sent 53 Doctors to Italy. Where is EU?

China is sending millions of testing kits to Italy. Where is U.S& U.K?

They only come together when they want destroy a country and take over natural resources.

Russian president Vladimir Putin has recently ordered his country’s army to fly medical supplies to Italy, after speaking to its prime minister Giuseppe Conte. Meanwhile, China sent supplies and medical staff to the country over a week ago. China’s assistance followed the EU refusing to provide help with medical supplies after a plea from Italy.

The UK has also received assistance from Cuba. After the UK asked numerous Caribbean countries to allow cruise ship MS Braemar to dock, Cuba agreed. The ship contained over 1,000 passengers and numerous reports of coronavirus. Furthermore, Cuba offered to help fly the ship’s passengers back to the UK. The country’s Foreign Affairs Ministry said:

These are times of solidarity, of understanding health as a human right, of strengthening international cooperation to face our common challenges, values that are key to the humanist practices of the Revolution and of our people.

All these countries – China, Russia and Cuba – are routinely vilified by both governments and the media in the west. Russia has served as the west’s bogeyman for decades. The US’s attitude towards China, meanwhile, is apparent in the military build-up around the country that began under Barack Obama. As investigative journalist John Pilger pointed out in his 2017 film The Coming War on China:

American bases form a giant noose encircling China with missiles, bombers, warships – all the way from Australia through the Pacific to Asia and beyond

The fact Donald Trump is calling coronavirus the “Chinese virus” also speaks to the vilification the Asian country faces in the west. Cuba too has faced ample criticism from western countries since its revolution in the 1950s.

There are, of course, many reasons to criticise all these countries, as there are with most nations around the world. But their support for Italy amid its coronavirus outbreak shows that wholesale vilification of them doesn’t paint the full picture.