Former Colombian president's arrest is long overdue. His whole political career is a case study in US hypocrisy. - The Canary 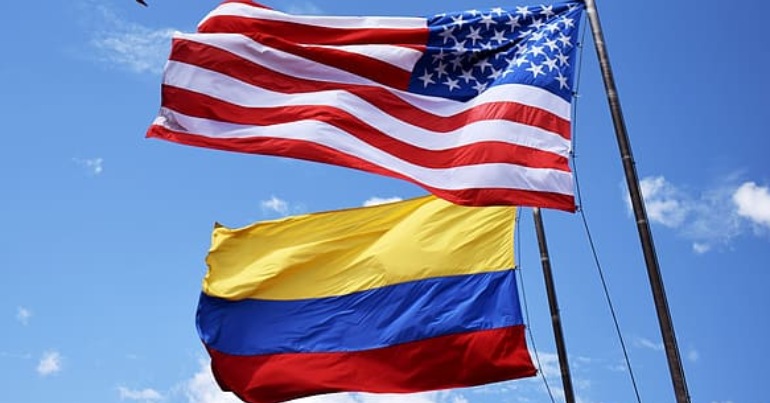 One of Colombia’s former presidents, who to this day remains one of the country’s most influential politicians, was recently arrested on a series of criminal charges. The arrest of Álvaro Uribe represents a major break from the norm for the war-torn South American country. For much of its recent history, its political class has largely been shielded from legal action, even in cases of serious wrongdoing. And this is especially true of figures on the political right.

But there’s more to the story than this. Uribe hasn’t just flagrantly evaded facing the consequences of a litany of alleged ill deeds for many decades, he’s also been one of the US’s most loyal allies in Latin America. And this reality provides one of the most illuminating examples of the brazen hypocrisy of US foreign policy.

On 4 August, the Colombian Supreme Court ordered the arrest of now-senator Uribe. According to the New York Times, he was detained as part of an investigation into allegations of “fraud, bribery and witness tampering”. The 68-year-old, however, will be spared incarceration in one of the country’s notorious prisons and will instead remain under house arrest.

The investigation began in 2018 and is concerned primarily with allegations that Uribe attempted to bribe a witness who allegedly belonged to one of Colombia’s right-wing paramilitary organisations. The witness has made statements alleging that Uribe had links to the creation of these armed groups.

‘The Israel of Latin America’

Uribe served as Colombia’s president between 2002 and 2010 and is still considered one of the country’s most important public figures. Colombia’s current president Ivan Duque owes his election in large part to Uribe’s support, which was crucial in turning him from a virtual unknown into a serious contender for the presidency.

While president, Uribe was a close US ally. So much so that Colombia became known as ‘the Israel of Latin America’, something that figures on the country’s political right have embraced as some kind of compliment. And this is telling on multiple levels. Because, like the US’s one-sided stance toward Israel in the Middle East, its treatment of Colombia during Uribe’s presidency exposes the deep hypocrisy that lies behind US foreign policy in Latin America as well.

For instance, ever since the election of Hugo Chavez in Venezuela in 1998, the US has been hell-bent on removing him and his successor from power. During the Trump administration, this has morphed into orchestrating a full-blown coup attempt and imposing an effective economic blockade that has claimed tens of thousands of lives. For over 20 years, US administrations of both parties have used allegations of human rights abuses, democratic breakdown, and state involvement in drug-trafficking and support for terrorism against Venezuela to justify these regime change efforts.

But during Uribe’s presidency, Colombia’s record on all four of these counts was much worse than that of Venezuela. As Kevin Young, a historian specialising in Latin American history, put it in a 2011 article (roughly a year after Uribe left office):

Colombia is the worst human rights violator in Latin America, and has been for two decades despite some significant competition.

About a year later, Colombia was declared the most dangerous country in the world for trade unionists in a report by the International Trade Union Confederation. This stems in large part from a brutal campaign waged by right-wing paramilitary groups against social leaders and anyone else who is deemed a threat to the power of the country’s economic elites or the multinational corporations that plunder its wealth.

A shocking record on collusion with right-wing death squads

Uribe’s political faction has been implicated in colluding with these paramilitary groups. During the ‘Parapolitics’ scandal, over 30 members of the Colombian Congress and five governors were convicted of such collusion. Some of those convicted were close political allies of Uribe, including his own cousin Mario Uribe. One former paramilitary leader, Salvatore Mancuso, openly admitted that his group supported Uribe’s bid for the presidency in 2002. He said, “the majority of us supported Uribe. We received instructions from the commanders to do so”.

Ironically, the US itself has designated the largest of these groups, the United Self-Defence Forces of Colombia (AUC in its Spanish initials), as a terrorist organisation. The combined number of civilian killings committed by such paramilitary groups and the Colombian state represents at least half of the civilian casualties related to the decades-long Colombian armed conflict. In fact, they killed more civilians during Uribe’s presidency than rival left-wing armed groups killed in the previous 30 years combined. In short, Colombia deserves to be on a state sponsor of terrorism list much more than Venezuela does.

No punitive measures whatsoever, and even rewards!

Yet far from issuing any kind of punitive measure against Colombia throughout this time, the US was providing Uribe’s government with generous funding. Via the Plan Colombia agreement, Washington channelled billions of dollars to the Colombian state under the guise of funding ‘counter-narcotics’ campaigns. There is a deep level of irony to this as well. Because there is strong evidence that Uribe himself has been involved in drug trafficking.

A declassified US intelligence report contains allegations made in the 1990s when Uribe was a senator that he was a “close personal friend of Pablo Escobar” who was “dedicated to collaboration with the Medellín cartel at high government levels”. Another declassified US intelligence document indicates that a fellow senator claimed that Uribe’s election campaign for the senate had been bankrolled by Escobar’s cartel.

Can Colombia even be called a democracy?

And this wasn’t the last instance where there’s been evidence of cartel funding for Uribe’s political campaigns. As Colombia Reports stated in March 2020, “Uribe and his party have never won a presidential election without the admitted help of drug traffickers”. Along with well-documented cases of electoral fraud and extensive voter intimidation on the part of the right-wing paramilitaries, this raises the question of whether Colombia can even be considered a democracy in the first place.

Since the US predicates its sanctions and regime change strategy against Venezuela on (generally much less credible) allegations of democratic breakdown, human rights violations, involvement in narco-trafficking, and support for terrorism, the case of Uribe perfectly demonstrates the kinds of brazen double standards the US applies in Latin America.

We shouldn’t be surprised, though. As The Canary has previously argued, the US does not, and nor has it ever, predicated its foreign policy stance toward other countries on anything other than naked self-interest. Rather it selectively uses (often embellished or even fabricated) allegations of human rights abuses, decline in democracy, or involvement in drug-trafficking and/or terrorism as after-the-fact justifications to manufacture consent among the public for the targeting of countries that it deems insufficiently obedient to its interests. As for countries like Colombia that are obedient, clearly there’s practically nothing that it won’t overlook.