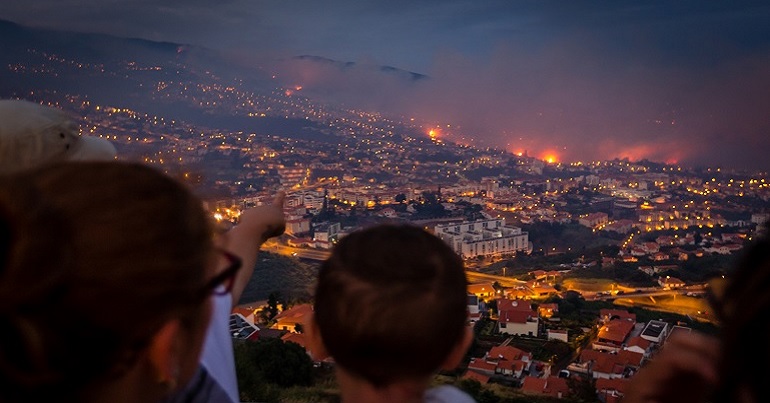 A groundbreaking legal case against 33 European countries just moved one step forward. Because, after several years of work, it has now officially been filed in the European Court of Human Rights (ECHR). But it’s even more precedent-setting than that, as the group bringing the case are all young people. And it’s about climate breakdown.

In 2017, more than 120 people died in Portugal due to wildfires. As The Canary reported at the time:

Around half the people burned to death in their cars as they tried to escape, after a stretch of road became engulfed in flames. But the fires, which happened as Portugal was under a severe heatwave with temperatures exceeding 40c, have been blamed by experts, in part, on climate change.

This prompted a group of young people to take action. They’re taking every EU country (plus the “UK, Switzerland, Norway, Russia, Turkey, and Ukraine”) to the ECHR. This is because, the group says, the countries’ governments are failing to protect their citizens from climate breakdown.

The young people are being represented by the Global Legal Action Network (GLAN). It is:

is an independent organisation made up of legal practitioners, investigative journalists and academics. We identify and pursue legal actions that promote accountability for human rights violations occurring overseas by working in partnership with other international and local grassroots organisations. GLAN provides the necessary platform to explore and develop legal strategies by combining legal and investigatory expertise.

The aims for GLAN and the case are straightforward.

They’re arguing that the member states’ failure to properly act on climate breakdown breaches the European Convention on Human Rights. The convention requires member states to take “reasonably available measures” to prevent interference with human rights. Or, where it is not possible to prevent interference completely, to mitigate for it. GLAN also refers to the convention articles:

Citing research by Climate Action Tracker, lawyers will argue that none of the 33 countries’ plans are aligned with their commitment under the Paris Agreement to limit global temperature rise ‘well below 2C’.

Climate Action Tracker found the levels of commitments made by the EU and the six other countries being sued, if matched by the rest of the world, would lead to at least 3-4C of warming.

The group wants the ECHR to act. They are calling for it to force member states to:

GLAN and the young peoples’ legal case has come in several stages. At first, they had to crowdfund for the fees to set up the case. After achieving that target, they raised money for the continuing legal costs. Again, they met that target, too – and now the case has been officially filed with the ECHR.

Not cut and dry. Yet.

But as Climate Change News reported, the case is by no means cut and dry. It reported that:

Under the admissibility criteria, a case may only be brought to the [ECHR], ‘after all domestic remedies have been exhausted’. That would require taking the case to the highest available court in all 33 countries.

But GLAN has applied to the ECHR for an exception to the rule. As Climate Change News reported, this is on the basis that:

pursuing 33 parallel cases is not practical, not least because of financial constraints.

It said that GLAN:

will also argue that domestic courts in Europe can and must do more to protect their citizens from climate change in line with their human rights obligations. In the UK and Germany, for example, courts have rejected actions by people trying to compel their governments to take swifter climate action.

This is the first time a climate change case has been filed with the European Court of Human Rights. We now face the major task of responding to the well-resourced legal teams of 33 countries. To continue this fight we are asking the public to help us cover essential costs

GLAN has almost reached that crowdfunding target. This is to cover “further legal research, evidence gathering and… translation costs”. As of Sunday 20 September at 10am, it was just £625 from the £5,000 goal.

Now the group must wait to see if the ECHR accepts the case. It could be precedent-setting. Not least because the ECHR may well not want to be seen to be dismissing such an action. But, moreover, because the young people and GLAN could, in theory, force the hands of governments. They could make them act on climate breakdown. Which, ultimately, will benefit every person on the planet.