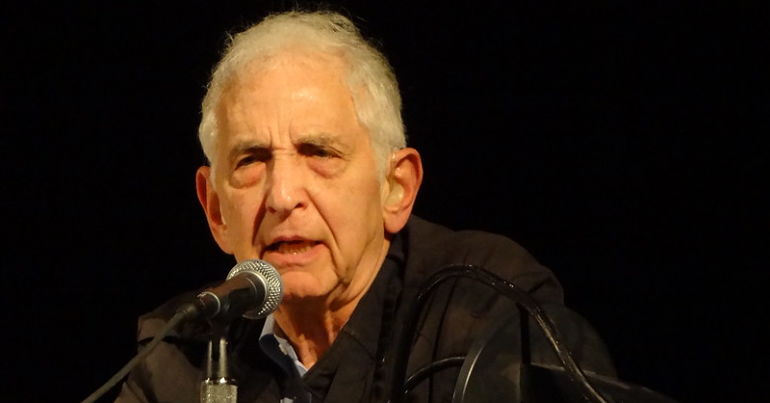 The second week of hearings at the Old Bailey for WikiLeaks founder Julian Assange‘s extradition to the US saw riveting testimony by renowned whistleblower Daniel Ellsberg. It was a key moment. Other testimonies during the week were equally challenging, leaving the prosecution at times struggling.

Assange is accused of 17 counts of violating the Espionage Act and one count of conspiracy to commit computer intrusion.

Daniel Ellsberg was responsible in 1971 for the leaking the top-secret History of U.S. Decision-making in Vietnam 1945-68 (which became known as the ‘Pentagon Papers’) to the New York Times and the Washington Post. The 7,000-page document provided an insight into top-secret US decision-making in the Vietnam War. Ellsberg declared that the publication of the papers showed that the war had:

been started and continued by the US Government in the knowledge that it could not be won, and that President Johnson and his administration had lied to Congress and to the public in relation to its origins, costs and prospects

As with Assange, Ellsberg was charged with violations under the Espionage Act. Ellsberg added:

It is widely acknowledged that the copying done by me and the much later, the publication of the Pentagon Papers, can reasonably be held to have contributed first, to the ending of U.S. casualties in Vietnam, and subsequently to the ending of the war and to the destruction of Vietnam and the deaths of its people.

In his testimony via video link to the court, Ellsberg compared the publication of the Iraq and Afghan War Logs by WikiLeaks to his own disclosures of the Pentagon Papers, in that both showed how the US government had misled people about the conflicts.

Ellsberg made reference to how his own prosecution for leaking the papers was dismissed. The trial ended with all charges dropped once it was known that president Richard Nixon had organised a break-in of Ellsberg’s psychiatrist’s office and that the FBI had organised wiretapping. Ellsberg told the court that the surveillance of Assange when in the Ecuadorian embassy in London was comparable with what happened to himself.

In his statement, Ellsberg further added:

I have followed closely the impact of a number of those publications [by WikiLeaks] and consider them to be amongst the most important truthful revelations of hidden criminal state behaviour that have been made public in US history. My own actions in relation to the Pentagon Papers and the consequences of their publication have been acknowledged to have performed such a radical change of understanding. I view the WikiLeaks publications of 2010 and 2011 to be of comparable importance.

James Lewis QC, representing the US government, questioned Ellsberg regarding his redaction of the Pentagon Papers, compared to how Assange dealt with the logs. Ellsberg responded by pointing out how Assange had withheld 15,000 files from those logs. Moreover, Assange had asked the US State Department and the Defense Department for help in the redaction process.

Once Der Freitag [a weekly German magazine] announced they had the unredacted [US cables], Julian Assange and Sara [sic] Harrison instantly telephoned the White House, State Department and US Embassy to warn them named sources may be put at risk.

A video extract from 2011 (and featured in the flawed 2017 film Risk) shows Harrison phoning the State Department to tell them they had a problem. But during the phone call, it was apparent the official at the other end wasn’t taking the warning seriously. At that point Assange dramatically held up a handwritten note to Harrison, urging her to explain that the situation was an emergency.

In 2011, WikiLeaks issued a statement about that phone call to the State Department:

Cliff Johnson (a legal advisor at the Department of State) spoke to Julian Assange for 75 minutes, but the State Department decided not to meet in person to receive further information, which could not, at that stage, be safely transmitted over the telephone.

Guardian journalists in the frame

Lewis went on to suggest to Ellsberg that the publication of the war logs by WikiLeaks could have placed informants in danger. However, Lewis could not provide to the court evidence that anyone was directly harmed as a result of the publication.

Prior to Ellsberg’s testimony, John Goetz, senior editor of investigations at NDR and former Der Spiegel investigative journalist, was questioned by Lewis about the redactions. Goetz told the court that Assange was determined that names of informants in the logs would be redacted. But the court heard from Goetz that WikiLeaks published the unredacted version of the files after the website Cryptome published them in full.

Goetz indicated Guardian editor David Leigh was at one point frustrated with delays in publication process of Iraq War Logs because WikiLeaks was taking so long to redact "bad stuff." #Assange

Cryptome reportedly published the unredacted version after Guardian journalists David Leigh and Luke Harding revealed the password to the server that contained the files: 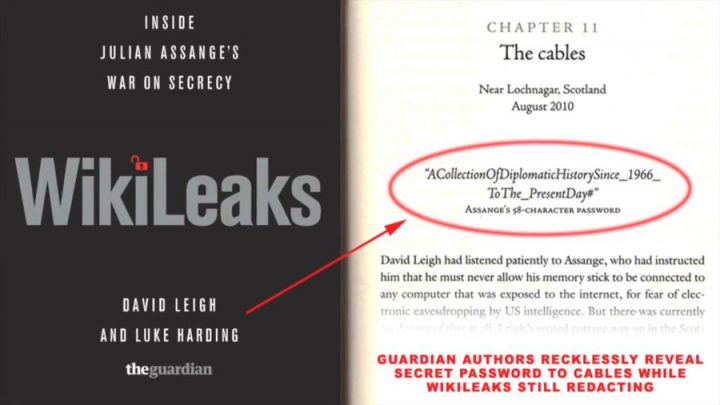 Previously, Leigh told The Canary that what the defence said about him and his colleagues was “complete invention”, though WikiLeaks editor-in-chief Kristinn Hrafnsson disputes this.

Separately, award-winning Australian journalist Mark Davis claimed that Guardian journalists appeared to neglect their responsibility for the redaction of the logs. Instead, he claims, they went home on the Friday afternoon and left the task to Assange that night and the next day, as there was a publication deadline for the Monday. The entire film is most revealing:

Defence lawyer Jennifer Robinson told the court that the Trump administration offered Assange a pardon during a meeting at the Ecuadorian embassy. It was requisite on Assange naming the source of the leaked Democratic National Committee (DNC) emails. The offer was made by then Republican congressman Dana Rohrabacher and Trump associate Charles Johnson. Rohrabacher has denied this.

Robinson, who attended the meeting, told the court:

They stated that President Trump was aware of and had approved of them coming to meet with Mr Assange to discuss a proposal.

The proposal put forward by Congressman Rohrabacher was that Mr Assange identify the source for the 2016 election publications in return for some kind of pardon, assurance or agreement which would both benefit President Trump politically and prevent US indictment and extradition.

Lewis did not challenge Robinson on her statement.

In an earlier interview in February, Hrafnsson explained that Assange declined the offer:

Krstinn Hrafnsson (@khrafnsson) Editor-In-Chief at WikiLeaks sets the record straight on the significance of the Rohrabacher-#Assange "pardon offer" discussion and how the mainstream press have not reported on correctly. pic.twitter.com/kA7PSJ9vwX

With regard to the Espionage Act, US lawyer Carey Shenkman told the court that:

Although the law allowed for the prosecution of spies, the conduct [the US Espionage Act] proscribed went well beyond spying. Indeed, the Espionage Act would become the principal tool for what President Wilson dubbed his administration’s ‘firm hand of stern repression’ against opposition to U.S. participation in the war.

Shenkman also observed that the indictment of Assange under the Act is the first time it has been used extraterritorially. He gave several examples of how the Act has been used in the US over the years to stifle dissent.

What is now concluded, by journalists and publishers generally, is that any journalist in any country on earth—in fact any person—who conveys secrets that do not conform to the policy positions of the U.S. administration can be shown now to be liable to being charged under the Espionage Act of 1917.

Assange to be “buried alive”

If extradited, and subsequently convicted, Assange’s lawyers believe he will be imprisoned in the supermax prison in Florence, Colorado. Prior to that, Assange could be held under Special Administrative Measures (SAMs). A report on SAMs, published in 2017 by the Center for Constitutional Rights and a human rights centre at Yale Law School, states:

The imposition of SAMs extends beyond convicted prisoners. Federal prosecutors regularly request that the Attorney General place defendants under these punishing conditions while they await trial, before they have been convicted of any crime. In numerous cases, the Attorney General recommends lifting SAMs after the defendant pleads guilty. This practice erodes defendants’ presumption of innocence and serves as a tool to coerce them into cooperating with the government and pleading guilty.

In its summary, the report explains that:

SAMs are the darkest corner of the U.S. federal prison system, combining the brutality and isolation of maximum security units with additional restrictions that deny individuals almost any connection to the human world. Those restrictions include gag orders on prisoners, their family members, and their attorneys, effectively shielding this extreme use of government power from public view.

During the extradition hearings, US defence lawyer Eric Lewis explained that:

Features unique to the U.S. criminal justice system, including sentences longer than are found elsewhere in the world (for example, sentences that run longer than a hundred years, life without parole, the death penalty…) and the unparalleled power of individuals prosecutors over charging decisions combine to make plea bargaining particularly coercive in that context.

If Assange was convicted and wound up in what is known as the H Block at ADX Florence, he would be housed in what has been described as the “only known black site on American soil,” or as Alan Prendergast put it for Westword, “A black hole, a void where men are slowly buried alive in layers of isolation until they vanish entirely.”

Former ADX Florence warden Robert Hood said that the prison is a “clean version of hell”. However, Article 3 of the Human Rights Act states clearly:

No one shall be subjected to torture or to inhuman or degrading treatment or punishment.

Under that article alone, the US extradition request should be rejected by UK courts.

The Canary will continue to report on the hearings as they progress.