Human rights watchdog claims that thousands were detained unlawfully in Belarus, including its staff. 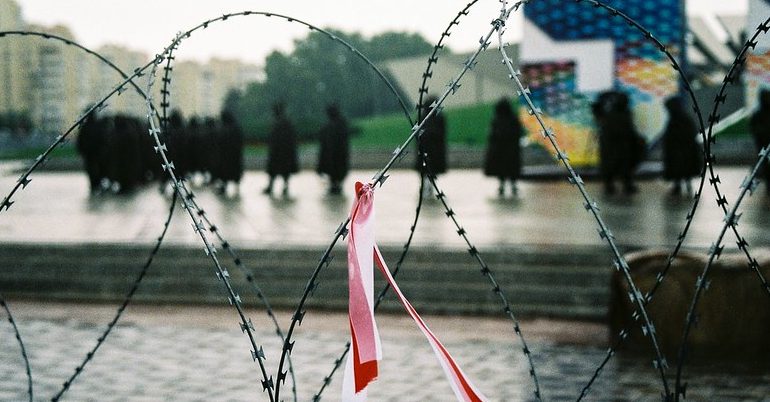 Human rights centre Viasna has stated that its staff were detained unlawfully for a second time by Belarus authorities.

The centre, which is responsible for monitoring elections and protests, claims that its staff were first illegally detained in May and have now been detained again, with some remaining in custody.

The statement comes alongside the 100th day of protests in Belarus, which came off the back of president Lukashenko’s’ re-election.

On October 30, 2020, a member of the Human Rights Center “Viasna” and independent journalist Maryna Kastylianchanka was detained by representatives of the Ministry of Internal Affairs in a cafe in Minsk.

According to the police reports, the activist was accused of allegedly taking part in an unauthorized picket on October 30, chanting slogans and disobeying police officers.

However, in reality she did not take part in any pickets that day and did not commit the offence she was accused of.

In this regard, Viasna’s human rights activists consider her detention as arbitrary and illegal.

On November 2, the Zavodski District Court of Minsk ruled to sentence Maryna Kastylianchanka to 15 days of administrative detention.

Viasna are yet to confirm whether Kastylianchanka has been released.

Repressed for a second time

However, this is not the first time Viasnas staff or volunteers have been detained.

In May 2020, several arrests were made, including Viasnas staff.

Viasna spoke out about the arrests:

We also clearly view these investigations as pressure on our colleagues in connection with their public activities to defend the rights of other citizens, collecting and disseminating unbiased information about socio-political events in the country, violations of citizens’ rights, including the right to a healthy environment. Moreover, we support the decriminalization of defamation in the legislation of Belarus.

Over 1,500 detained before the election

The Organization for Security and Co-operation in Europe Office for Democratic Institutions and Human Rights (OSCE) has reported that several members of Viasna were just a few out of over 1,500 detained before the presidential election:

According to the UN special Rapporteur on human rights in Belarus about 1,500 persons were detained in the period before the elections since April 2020. Among them were also several members of Human Rights Center “Viasna” who monitor various protests, which can be considered as harassment and intimidation by the authorities.

But it’s not just human rights staff that have been intimidated.

In fact every member of the opposition council has either been arrested or deported from Belarus.

Every member of the opposition council has been arrested or deported

According to the OSCE, following the election results in August 2020, presidential candidate Svetlana Tikhanovskaya created an NGO, the Coordination Council, that aims to “facilitate a transfer of power” in Belarus.

Since then all seven members of the Coordination Council have been deported from Belarus or arrested.

The OSCE listed the names of the members who faced criminal charges or deportation as:

The seventh member, Svetlana Alexievich, was allegedly intimidated into leaving Belarus, although the official report stated that she left to travel to Germany for medical treatment:

Intimidation of the last remaining member of the presidium of the Coordination Council, Svetlana Alexievich allegedly forced her to leave Belarus. She had been called for interrogation and there was an attempt to detain her or conduct a search in her house, which she prevented with the help of International diplomats. She left Belarus on 28 September 2020 for medical treatment in Germany.

According to the OCSE:

She was abducted on 7 September 2020 by masked men in Minsk and allegedly prevented her deportation by destroying her passport. Consequently she was detained for several days in an unknown place without access to her family or a lawyer.

On 23 September 2020, Amnesty International issued an urgent action to the prosecutor general of the Republic of Belarus.

We remind Belarus that absolutely no circumstances can justify enforced disappearances – not political instability or any other public emergency. Belarus must strictly comply with fundamental legal safeguards to prevent enforced disappearances. These include immediate registration, judicial oversight of the detention, notification of family members as soon as an individual is deprived of liberty, and the right to hire a defence lawyer of one’s choice.

Kolesnikova was later accused of causing harm to national security through the use of mass media or the internet. In response, she opened up a criminal investigation into the KGB and the Main Directorate for Combating Organised Crime and Corruption of the Ministry of Internal Affairs of the Republic of Belarus.

The OSCE claim that the charges against the state were abduction, unlawful deprivation of liberty, the threat of assassination, causing serious bodily harm, or destruction of property.

Although, potentially the biggest target has not been politicians but journalists.

Journalists continue to be a target

Since September 2020, at least 144 domestic journalists have detained under ‘administrative charges’.

Similarly, since September, 83 journalists, 21 of them foreign reporters, were held without a police report. In other words, the reasons for their arrests is unknown and not documented.

Viasna claims that there have been approximately 300 cases of violations against journalists’ rights from 9 August to mid-September 2020:

While the Belarusian Association of Journalists reports 23 violations of journalists’ rights from the beginning of the year to May 8, i.e. before the election was called, it registered about 300 such cases from August 9 to mid-September. The vast majority of them occurred in the post-election period. There were over 180 detentions of journalists during this period.

Following protests on 15 November, 24 journalists were arrested with 11 still in custody at the time of publication.

According to Viasna, journalists were held despite identifying themselves as press:

The Belarusian Association of Journalists said that at least two dozen reporters were detained during the Sunday protests. The journalists were held despite wearing marked vests and carrying valid press IDs.

Some detained protesters and several journalists were eventually released, while facing “illegal protesting” charges. Others remained in detention and will stand administrative trials in the coming days.

While still in custody, they were awarded the Media Freedom Award by the Canadian and UK government.

In a moving speech, chair of the Belarusian Association of Journalists Andrey’s Bastunets stated:

In just 3 months, the Belarusian Association of Journalists has recorded over 400 gross violations of journalists’ rights.

Reporters who covered mass protests against election fraud and state violence, have become victims of violence and fraud themselves. They have been beaten, their equipment damaged or seized, and they have been sent to jail by unfair court decisions.

Reporters worked literally under bullets — in a country that is not at war! Three journalists were wounded. About 60 of our colleagues went through short jail sentences. Right now, while I speak, 22 journalists are behind bars, deprived of their freedom for doing their job.

Three months into the protests, the arrests of human rights staff, politicians, and journalists continues. While the UK has called for a re-election in Belarus, now international pressure must also focus on holding the Belarusian authorities to account for the mass breaches of human rights that continue to happen on a daily basis.