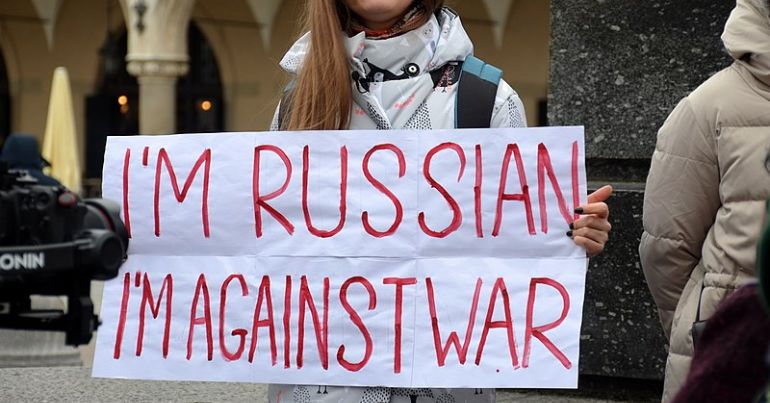 Mass arrests and protests have followed Russian president Vladimir Putin’s threats to use nuclear weapons and his order to mobilise military reserves. The resistance comes after Putin gave a fiery speech pledging that any incursion into Russian territory would be met with massive force.

Referendums in contested Russia-held territory have also been promised. The suggestion seems to be that those territories would be included under the new nuclear umbrella.

The new orders follow major Ukrainian advances into areas occupied by Russia since the invasion.

In a major speech on Wednesday 21 September, Putin condemned the west for supplying arms to Ukraine and said of alleged western nuclear threat against Russia:

I would like to remind those who make such statements regarding Russia that our country has different types of weapons as well, and some of them are more modern than the weapons NATO countries have.

In the event of a threat to the territorial integrity of our country and to defend Russia and our people, we will certainly make use of all weapon systems available to us. This is not a bluff.

Putin’s decree that reserves be mobilised included an order that reservists would be paid the same as regular troops and enjoy the same conditions.

The period of mobilisation was not specified and the precise numbers were not stated. The decree did also mention exemptions for age and illness.

There were reports that within hours flights out of Russia and some other countries liable for reserve service were sold out within minutes, with prices skyrocketing:

Flights departing Moscow and St. Petersburg today. The @AP is reporting international flights departing Russia have either sold out or skyrocketed in price after Putin announced a mobilization of reservists.

Also within hours of the decree, arrests were being reported across Russia with 100 each in Moscow and St Petersburg. This appears to be a response to dissent and organising against the war, and against mobilisation:

at least 364 arrests of anti-war/anti-mobilization protesters across russia, including almost 100 each in st. petersburg & moscow.
and, since this tweet, a mass arrest of 60ish in st. petersburg (I believe, not counted here) was reported. https://t.co/RVD2dHYHHb

Some reports suggest that arrests at anti-war demonstrations across Russia were as high as 1700. And there are claims that some were badly injured by police as they were taken into custody:

>1,746 people arrested at anti-war protests in Russia. Now activists begin a long night of searching police stations for missing & injured people, the girl whose head was dragged on the asphalt, the guy whose contact lens was punched into his eye, etc @AvtozakLIVE @OvdInfo pic.twitter.com/rJa7bppUBW

Planned referendums in contested and occupied regions are set to go ahead. The thinking seems to be that the votes, derided as illegitimate by the Ukrainian foreign minister on Tuesday, will allow Putin’s Russia to integrate the areas into Russian territory.

The rationale, according to pro-Ukrainian figures like former BBC correspondent John Simpson, is that these territories will then form a red line in terms of Putin’s nuclear threat:

This is a very dangerous moment. Phoney referendums in Russian-controlled eastern Ukraine will mean Russia can claim that Donbas etc is actually part of Russia. If Ukraine continues to advance there, Putin will threaten to use nukes to defend Russian territory. WW3 would beckon.

It is tempting to look at Putin’s decrees as evidence of a regime in crisis and this may well be accurate. But once again the Ukrainian war makes the global risks apparent. Driving the Russian regime to the point of pressing reserves into service, and making threats of this kind, is nothing to crow about.

Rather, it highlights the risk of enduring nuclear capability. There’s also the need for a settlement through dialogue and the kind of serious program of global disarmament which the end of the Cold War failed to deliver.