Following events in Leicester, South Asian solidarity is more important than ever - Canary 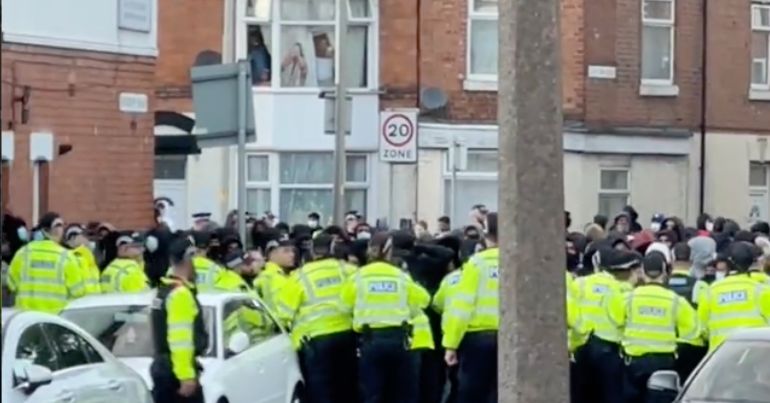 On Saturday 18 September, busloads of Hindutva nationalists descended on Leicester to carry out violent attacks against members of the local community. Mainstream reports are framing the violence to be a case of local tensions between Hindu and Muslim communities. However, this was a targeted attack led by Hindu nationalists who were not local to the area. According to witnesses, those involved shouted Hindutva exclamations, targeted attacks against local Muslims, and damaged mosques in the area.

The violence on Saturday reflects the rise of Hindu nationalism in the UK. Rather than seeking short-sighted criminal justice responses to a global issue, we must unite in solidarity against Hindutva fascism.

Just a small minority of Hindu extremists in #Leicester who are causing trouble & taunting the Muslims did u say? They’re out in their hundreds then play victim online afterwards. The police told Muslims it was all under control but clearly NOT! This is the reality on the ground. pic.twitter.com/qk67GFvml4

Multiple witnesses and videos confirm a group of Hindu men were chanting, “Jai Shri Ram,” Hindi for “hail Lord Ram" or "victory to Lord Ram,” as they marched through a Muslim majority area in Leicester. This chant has become synonymous with anti-Muslim violence in India. https://t.co/061wokdtRF

Indeed, “Jai Shri Ram” has been co-opted by Hindutva nationalists enacting vicious Islamphobic mob violence in India. The utterance of this phrase in Leicester reflects the success of attempts to export Hindu nationalism to the UK.

The Indian High Commission in the UK issued a press release, framing local retaliation carried out by a small number of community members to be “against the Indian Community” and Hindu religion. This framing of events is disingenuous, and feeds into false ‘both sides’ arguments. It ultimately seeks to legitimise the fascist ideology of Hindu nationalist paramilitary group Rashtriya Swayamsevak Sangh (RSS) and its political arm the Bharatiya Janata Party (BJP), which is led by Indian prime minister Narendra Modi.

As writer and activist Amrit Wilson has explained, the Hindu far-right RSS and BJP have a great deal of power and influence in Britain.

Reacting to the Labour Party’s criticism of Modi’s settler colonial agenda in Kashmir in 2019, Hindu nationalists launched a strident anti-Labour propaganda campaign in areas including Leicester, Harrow, and Brent. This campaign was based on claims that Labour’s commentary was anti-Indian and anti-Hindu.

The RSS and BJP also have a great deal of support from the British government. In 2020, Indian police used tear gas and water cannons against Indian farmers protesting Modi’s repressive farm laws. By 2021, an estimated 700 farmers had died while campaigning to overturn the laws. But in April 2022, then-prime minister Boris Johnson celebrated Britain’s partnership with the Indian government in the name of “global peace and security“. This reflects the extent to which the British state has legitimised Modi’s oppressive and deeply Islamophobic BJP government in India.

Policing is not the answer

On 19 September, Leicester Police shared that officers had arrested 47 people and sentenced one young person in relation to the events. Police have now increased their presence in East Leicester.

Reacting to calls for criminal justice responses to the violence in Leicester, writer Ilyas Nagdee said:

The only calls being made consistently re Leicester is increased policing, surveillance and state intervention.

By virtue of my TL, I've primarily seen this from Muslim orgs – its a huge error and one which will have tragic consequences.

Seeing people responding to Leicester from all sides calling for censorship, increased police powers and activity and deportations. This is not how we combat malicious actors: community organising and directly challenging bigotry when it rears its head is the only route forward.

Indeed, we can’t let what happened in Leicester legitimise the further encroachment of policing and surveillance of South Asian communities in Britain. In particular, South Asian Muslims are overpoliced and surveilled through state ‘War on Terror’ strategies such as the Islamophobic Prevent duty. And a recent report by the Institute of Race Relations revealed that citizenship-stripping powers introduced in 2002 have reduced South Asian British Muslims to a ‘second-class citizenship’.

Responses that depend on the criminal justice and immigration systems will only serve to further harm South Asian communities in general, and South Asian Muslims in particular. Instead, we need responses that foster accountability, healing, and community.

The only logical response to the violence in Leicester is a united front against Hindu fascism. As writer Taj Ali shared:

The vast majority of British Muslims, Sikhs and Hindus get along. We are neighbours and friends. We organised together in the past to fight racism and discrimination. And we won't allow the extremists to divide us.

In fact, Britain has a long, rich history of South Asian anti-racist and anti-fascist organising. In the 1960s, 70s, and 80s, young British South Asian Muslims, Sikhs and Hindus collectively built strong self-defence and community empowerment movements in towns and cities across the UK. This legacy is present in the organisation of groups such as Black Lives Matter and Sikhs Against the English Defence League today.

Broad-based solidarity is the only way we can overcome ‘divide and rule’ politics. Recognising this, anti-imperialist and anti-racist group South Asia Solidarity has organised an emergency protest at 6pm on Thursday 22 September at the Indian High Commission:

#Leicester Emergency Protest for Peace and Unity Thurs 22 Sept 6pm. We must stand together to foil #BJP, #RSS plan to divide our communities & export orchestrated #Hindutva fascist violence onto the streets of UK cities. Join us outside the Indian High Commission, London WC2B 4NA pic.twitter.com/CyLPhht6BZ

Saturday’s events have made it abundantly clear that it’s time for us to take a firm stand against the rise of Hindu nationalism in the UK, and undermine attempts to stifle South Asian solidarity.