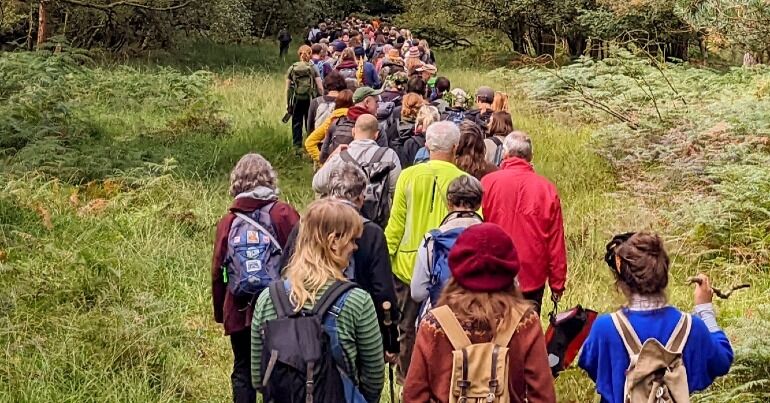 We live in one of the least forested countries in Europe; only 13.2% of land in the UK is covered in woodland. Depressingly, this figure includes monoculture conifer plantations, devoid of birdsong, which exist to make profit from their timber. Ancient forest makes up just 2.5% of our land.

And so the news that Center Parcs wants to destroy one of England’s last ancient forests has been met with both despair and outrage. On Saturday 24 September, 300 people gathered to trespass in the private woodland of Oldhouse Warren to protest against Center Parcs’ plans. If the corporation gets the go-ahead, it will destroy 553 acres of this Area of Outstanding Natural Beauty, filled with gnarly old beech and oak trees.

Landscapes of Freedom (LOF), a local group in Sussex, organised the mass trespass, alongside the Right to Roam campaign. LOF’s Kim Turner told The Canary:

Center Parcs wants to build 900 lodges, along with a plaza, a ‘sub-tropical swimming paradise’, restaurants, shop, spa, roads and car parking areas. The company portrays itself as offering forest holidays, but it destroys precious habitats. It wants to create a synthetic backdrop to monetise a forest and commodify nature. It will make profit from this forest, transforming it from private ownership to corporate ownership.

Trespassing is a necessity

The forest is fiercely private, out of bounds to normal people. This does, of course, present a problem. After all, how can the public fight to save something that it doesn’t even know exists? How can people feel a connection to a land when barbed wire keeps us out of it?

We need to know and love this forest which is on our doorstep if we are to defend it. What the eye cannot see, the heart cannot grieve.

This is precisely why mass trespasses like this are so important. Of the hundreds of people walking in Oldhouse Warren, only a handful have ever been there. The public is seeing this magical, ancient landscape for the first time. On this very land, plants and creatures of a temperate rainforest, which was dominant 7,000 years ago, still survive.

Oldhouse Warren is a place of peace and delight, and home to rare and beautiful wildlife… Its ground nesting birds, like woodcock & nightjar, have some of their last Sussex refuges here in these forests. They need places where we will leave them in peace.

The gnarled old veteran oaks, beeches and occasional yew trees are survivors of the wildwood, before humans cleared and changed it so profoundly…

This wonderful heritage of ancient trees is unloved, unknown and ignored.

And it desperately needs saving, not destroying in the name of capitalism.

Smashing through the false narrative

Of course, the hundreds-strong crowd isn’t just protesting against the Center Parcs development. It is also campaigning for the right to roam in England – to walk freely without fear of being screamed at by an irate, entitled landowner. In England, we only have the right to roam on 8% of the land. 92% is, like Oldhouse Warren, out-of-bounds to the public, and you’ll be trespassing if you set foot on it.

LOF argues that Oldhouse Warren should be land that everyone can enjoy, much like Epping Forest is to London, or like the New Forest is to Southampton – a common land for everyone.

In the UK, it’s an alien idea to us that we should have the right to walk in our woodland. Everyone is taught to believe that if there is barbed wire and a ‘no trespass’ sign then it’s something you really shouldn’t do. We need to smash through this false notion that because someone’s ancestors were gifted huge tracts of land, or because they became so wealthy from slave trading in the Empire, that they somehow have the right to exclude us from the land. We were all born of this land, and we’re all part of nature. It’s actually a really simple ask: Can I walk gently and respectfully through this forest?

This successful trespass is just one of many that have taken place in England over the past year, in Sussex, Devon, Bristol and other parts of the country, as part of the wider right to roam campaign. Just a few days before the action in Oldhouse Warren, campaigners also trespassed in Northumberland on a ‘dark skies’ action, the first mass trespass to take place at night.

We can expect more trespasses in the near future as the campaign gains more and more momentum. People everywhere are waking up to the fact that the land is for all of us, not just the rich, and we will no longer put up with being excluded from it.