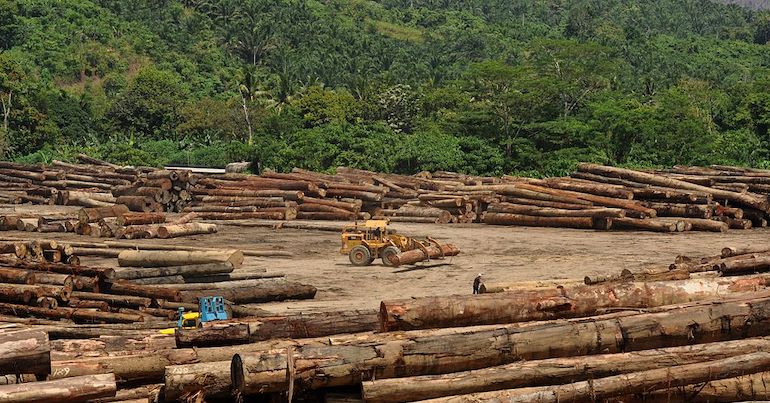 Logged tropical forests can take up to a decade to stop being overall sources of carbon emissions, according to a new study. The findings turn current understanding on its head. As the study’s authors pointed out, the general assumption is that, due to the fast regrowth of trees after logging, these forests are sinks for carbon, meaning they absorb more carbon than they release.

The discovery betters our understanding of what emissions arise from human activities, along with having worrying implications for the world’s remaining ‘carbon budgets’.

Researchers at Imperial College London led the study, which focused on forests in Malaysian Borneo. Their research suggested that due to carbon emissions from soils and rotting wood, logged forests release more carbon than they store in newly grown trees for many years. Proceedings of the National Academy of Sciences published the paper on 9 January.

Deforestation, meaning forest destruction, leads to increased carbon emissions. This is primarily because trees store carbon, so when we cut them down the carbon enters the atmosphere.

As the study highlighted, however, logged forests – which are degraded but not destroyed – are generally “counted as important carbon sinks”. This assumption is due to the fact that new trees will suck up carbon.

According to the study authors, though, when you factor in the release of carbon from soils and dead wood in forests subject to moderate and heavy logging, they are net emitters of carbon for some time. Lead author Maria Mills explained:

Our results show that for the tropical forest we studied, logged areas are a source of carbon even a decade after logging has occurred.

In contrast, unlogged forests are generally carbon neutral, they found.

Lead researcher Dr Terhi Riutta further explained that “collateral damage” contributes to the release of carbon in recovering forests. This refers to trees that die because loggers damage them, Riutta said. Additionally, the disturbance of soils by loggers is an issue, as soils also store carbon. So Riutta said that “better logging practices” could help to improve their sustainability.

As academics highlighted in a 2018 perspective article published in Nature, preserving remaining intact forests is vital to “halt the ongoing biodiversity crisis”. But Riutta stressed that recovering forests have “value” in this regard too. As Riutta’s co-author Yadvinder Malhi pointed out on social media, a further recent study illustrated that degraded forests can also be rich in species, in contrast to landscapes like palm oil plantations:

8/ So, logging seems to have worse & longer-lived consequences for carbon release from tropical forests than we expected. In contrast, in a recent paper in @Nature at the same field site we found that logging was much better for biodiversity and ecological function than expected pic.twitter.com/N15Z8uggCD

The study highlighted by Malhi provides a challenge to suggestions that degraded forests lack ecological value and, as such, should be converted to agriculture.

The findings on carbon emissions from recovering forests call for a rethink on how we factor them into carbon budgets, according to the Imperial College London researchers. Although they caution that similar forest monitoring elsewhere would offer a fuller picture, Mills said:

This means we need to reassess [the role of recovering forests] in global carbon budgets – we can no longer apply the blanket assumption that they are carbon sinks.

As Carbon Tracker has explained, carbon budgets relate to the “cumulative amount” of carbon emissions that can be “permitted over a period of time to keep within a certain temperature threshold”. In other words, the budget amounts to a cap on what emissions should happen, in order to give us half a chance of staying below certain levels of global warming.

To try and keep global warming under 1.5C, the remaining global carbon budget is already very low. As Carbon Brief puts it, we’re on course to blow the remaining budget in just nine years or less, if we keep up current rates of emissions.

In this context, the study’s findings on carbon emissions from logged forests are concerning. They suggest that the carbon budget likely downplays the amount of emissions coming from these sources.