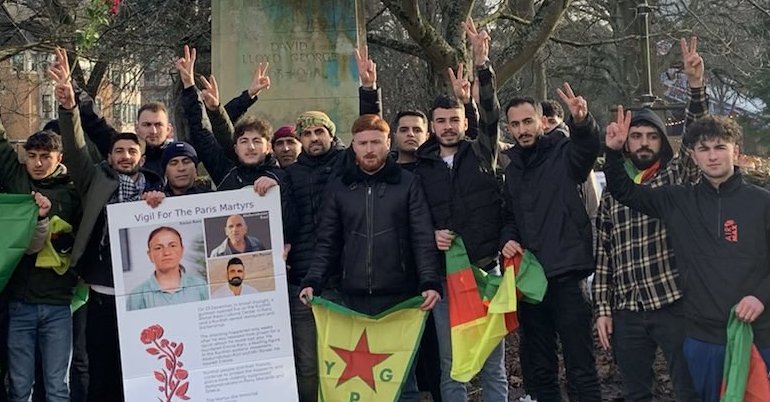 On Monday 9 January, people demonstrated in Cardiff and London to commemorate the three people killed by gunman William Malet last December at the Kurdish Cultural Centre in Paris.

The Canary recently reported that those who died on 23 December were “Abdurrahman Kizil, singer and political refugee Mir Perwer, and Emine Kara, a leader of the movement of Kurdish women in France”. Glen Black wrote:

Police arrested Malet after the murders, and charged him on 26 December. Malet told investigators at the time that he had a “pathological” hatred for foreigners and wanted to “murder migrants”. As well as killing Kizil, Perwer, and Kara, Malet wounded a further three people. The suspect had a violent criminal history. At the time of the murders, he had just left detention for attacking a Paris refugee camp with a sabre in 2021.

Thousands attended the funeral in Paris on 3 January, and French police attacked the mourners.

The attack comes ten years after Turkish intelligence agent Ömer Güney assassinated Sakine Cansız (Sara), Fidan Doğan (Rojbîn), and Leyla Şaylemez (Ronahî) in a similar attack in Paris. Kurdish freedom movement news agency ANF Firat wrote that there has been no justice for Sara, Rojbîn and Leyla in the ten years since. According to ANF:

justice remains far and so does truth

The Kurdish People’s Democratic Assembly of Britain (NADEK) held a demonstration outside the French embassy in London on 9 January, where they remembered both massacres.

People tweeted news from the demonstration:

Members of the Kurdish community in London protested outside the French Embassy today to demand the French government open 'secret files' that will shed light on the Turkish state's involvement in the assassinations of three Kurdish women activists in Paris on 9/10 January 2013. pic.twitter.com/Qpl4NvPbbW

NADEK said in a statement:

Ten years on, there has been no justice for Sakine, Fidan and Leyla or any of the thousands of other women assassinated, raped, tortured and murdered by the Turkish state. We demand the UK, France, the European Union and international organizations take action to hold Turkey to account and to bring the real murderers to justice.

The group demanded that:

The UK, France, EU and the international community must launch a proper and thorough investigation into the chain of command which led to these deaths.

“the second triple murder in 10 years”

On the same day in Cardiff, around 40 demonstrators gathered to remember those who died in the attacks.

A vigil was held in Cardiff city centre, and then the demonstrators moved to a statue of Lloyd George. The group explained why in a press release:

Kurds are being forcibly assimilated, murdered and tortured, this is happening not only in the middle east but also in Europe. This triple murder is not the first time for this to happen. France failed to protect its Kurdish born citizens that came to France to flee violence

Wales is not innocent either, a Welsh prime minister was behind the partition of Kurdistan, and to this day we have statues of him in Cardiff and Caernarfon. There is even a Lloyd George museum that fails to mention his role in the partition that had lead to war that lasts to this day. There are 40 million Kurdish people worldwide, they are the largest nation without a state in terms of population.

‘Violence is following us here’

Baris Rubar, a member of the Kurdish community in Wales said:

We flee from our countries so that we can live in safety, only to have the violence follow us here. The European governments have a responsibility to protect its citizens. This is the second triple murder in 10 years in Paris of Kurdish activists. We believe there is something sinister going on and that the Turkish state should be investigated for these assassinations.

Kurdish organisations have vowed to keep on organising until they get justice for those killed in the two Paris massacres. They deserve support and solidarity in their struggle.