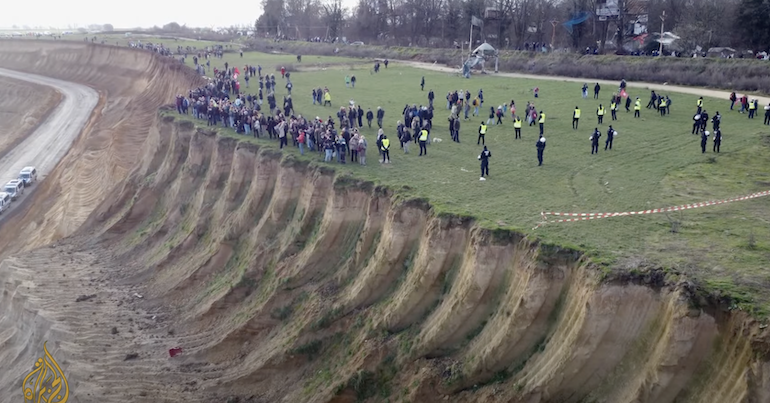 In an open letter circulating on social media, scientists have rallied behind protesters fighting against Germany’s planned expansion of a coalmine.

Thousands of activists face imminent eviction by police from a village called Lützerath. Concerned citizens have occupied this village as it’s pegged for destruction in order to make way for the coalmine expansion.

In an open letter, Scientist Rebellion – a group of activists with scientific backgrounds – says the civil disobedience taking place in Lützerath is “legitimate and necessary”, stating:

As scientists, we repeat once again: all fossil fuels must remain in the ground.

As DW reported, over a thousand people have headed to Lützerath to oppose the mine expansion in recent days.

However, the plan for German energy giant RWE to enlarge the Garzweiler mine, potentially swallowing up a number of villages, has been years in the making. So protesters have variously occupied Lützerath since 2020, as the makeshift houses they’ve built there indicate.

This sensational video by @LuetziBleibt gives a quick sense of how the movement is resisting.

German police plan to evict protesters on 11 January. And according to Channel 4 News’ Alex Thomson, the police started moving some protesters and carried out some arrests on 10 January too:

Cops announce the protest is now illegal . They said they’ll clear protesters from outside Lutzerath but won’t begin clearing the village today pic.twitter.com/FQCIIkjs8n

There are some arrests as opposed to just being moved around pic.twitter.com/02yD7ZZfhO

Chancellor Olaf Scholz’s coalition – including the Green Party – took office in December 2021 with a vow to phase out coal usage. Environmental groups had since hoped that Lützerath would be spared the excavators.

But amid Russia’s war in Ukraine and global energy supply issues, Scholz’s government granted permission to RWE to expand the mine into the village. As part of the agreement, five other villages will be spared and Germany has set an end date for coal mining in the region for 2030.

For the many protesters gathered at the site, however, this isn’t good enough. At a rally on 8 January, Luisa Neubauer, a climate activist with Fridays For Future, said:

If we want to limit this crisis, then there has to be an end to the destruction

Scientist Rebellion agrees. As economic historian and social theorist Matthias Schmelzer argued in a Twitter thread on the situation, the planned Garzweiler mine expansion represents a “red line that must not be crossed”:

We cannot accept the decision that the village of Lützerath is to be sacrificed to the open-cast lignite mine Garzweiler II.

Explaining why this is the case, Schmelzer said that the village’s planned destruction is “symbolic” of policymakers ignoring science in relation to the climate crisis: 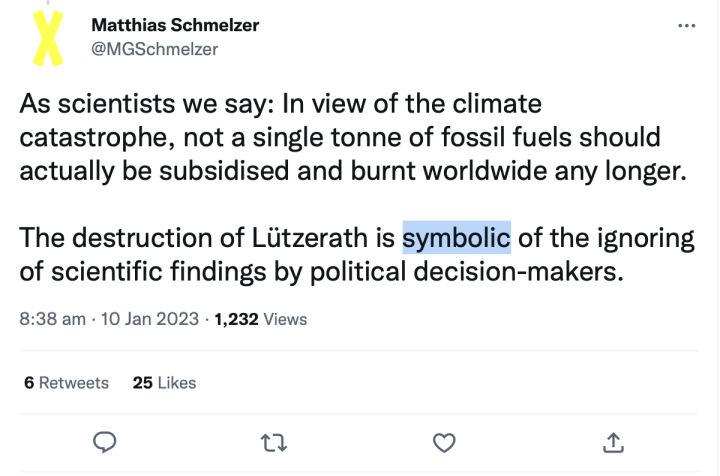 The German government insisted on 9 January that it needs Lützerath coal “to guarantee the security of the energy supply” due to the power crisis.

But according to a 2021 study by the German Institute for Economic Research (DIW Berlin), the country risks breaching its climate commitments under the Paris Agreement if it goes ahead with the expansion.

Our study clearly shows that Lützerath does not need to be destroyed and mined. There is enough coal in the existing areas.

Some individuals from Scientist Rebellion are taking part in the civil disobedience at Lützerath, as scientists have done elsewhere over plans for fossil fuel expansion. In a stirring conclusion to their open letter, they argue that “scientific insight and love for all living things” leave scientists and the wider community with “no other choice” than to take action.