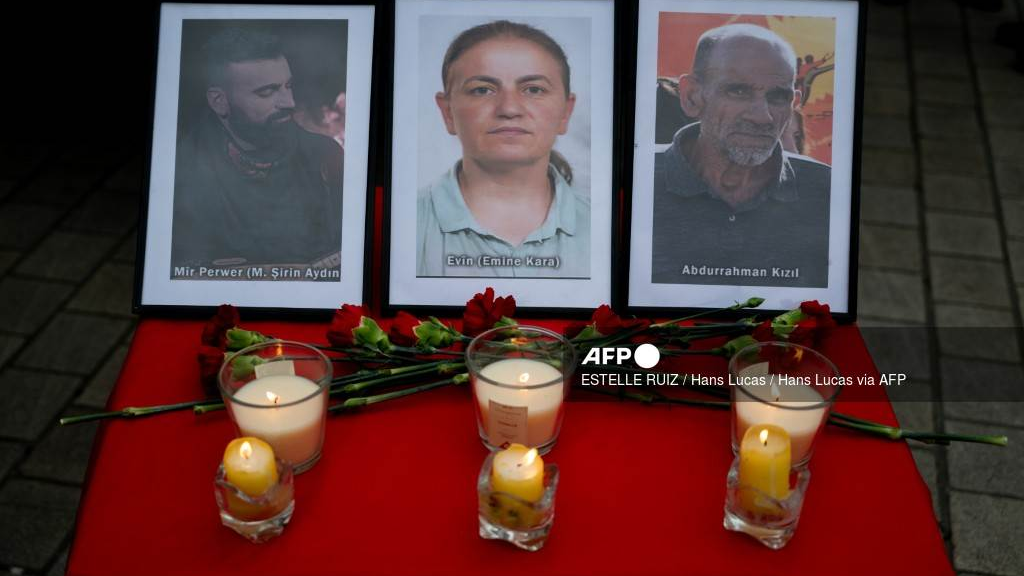 Kurdish people from across Europe travelled to the suburbs of Paris, France, on 3 January for the funeral of three Kurds murdered in a racist attack. Gunman William Malet killed two men and one woman on 23 December, in a attack on the Ahmet Kaya community centre in Paris’ 10th district.

His victims were Abdurrahman Kizil, singer and political refugee Mir Perwer, and Emine Kara, a leader of the movement of Kurdish women in France.

Organisers chartered buses to bring people from across France and some neighbouring countries to the ceremony in Villiers-le-Bel, north of Paris, local sources said. Tears and cries of “Martyrs live forever!” greeted the coffins, wrapped in the flags of the Kurdistan Workers’ Party (PKK) and the Kurdish-controlled Rojava territory in northern Syria.

Thousands of people attended the funeral ceremony held today for #EvînGoyî, #MîrPerwer & #AbdurrahmanKızıl, who were murdered in the attack on Ahmet Kaya #Kurdish Cultural Centre on 23 December 2022 in #Paris, the capital of #France#ParisMassacreOfKurdspic.twitter.com/cGX6KHvp4G

The huge crowd followed the funeral on giant screens erected in a car park. The screens showed coffins surrounded by wreaths beneath a portrait of imprisoned PKK leader Abdullah Ocalan.

Police arrested Malet after the murders, and charged him on 26 December. Malet told investigators at the time that he had a “pathological” hatred for foreigners and wanted to “murder migrants”. As well as killing Kizil, Perwer, and Kara, Malet wounded a further three people. The suspect had a violent criminal history. At the time of the murders, he had just left detention for attacking a Paris refugee camp with a sabre in 2021.

A history of Turkish persecution

Many Kurds in France’s 150,000-strong community refuse to believe Malet acted alone. They called his actions a “terrorist” attack, and pointed the finger at Turkey.

Ten years ago, men believed to have ties with Turkey’s secret services shot dead three Kurds connected to the PKK. The murders took place in Paris’s 10th District. Coincidentally, their funerals were held in almost exactly the same spot as those of Kizil, Perwer, and Kara. More recently, the now-banned Turkish ultra-nationalist group Grey Wolves was blamed for an attack in Lyon. Members of the group beat men at the city’s Kurdish cultural centre in April 2022.

Celik, a local who attended the 3 January funeral, said:

We feel like they’re doing everything they can to crush us, whether it’s here or in Turkey.

Malet’s murders led to confrontations between Kurdish people and French police in the streets of the capital.

A chance to pay respects

The Democratic Council of Kurds in France (CDKF) said the 3 January ceremony was an:

CDKF activists will lead a march on 4 January in tribute to the December victims. The route will include the street where the shootings took place.

On 7 January, a “grand march” of the Kurdish community will set off from Paris’s Gare du Nord rail hub. Organisers had originally planned to mark the 10th anniversary of the 2013 shootings, but will now mark the most recent murders.

Thousands attend the funeral of the martyrs of #Paris terrorist attack

The Democratic Kurdish Council in France called for participation in a march to be held in the French capital on January 7. pic.twitter.com/MhgrE7LJhh