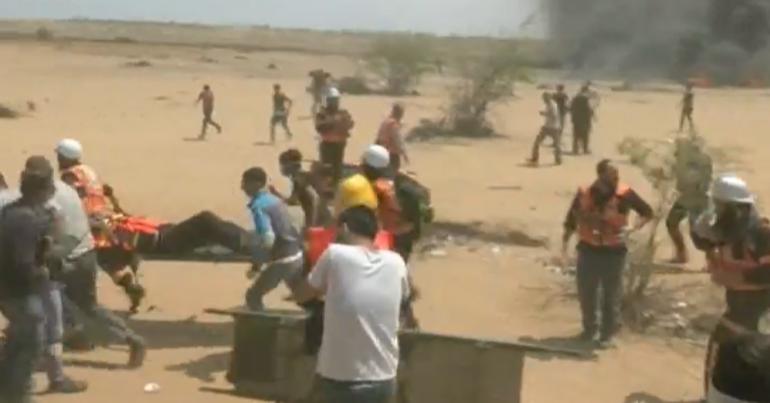 Scores of Palestinian protesters have been killed by Israeli snipers, as officials celebrate the relocation of the US embassy to Jerusalem.

By the time of publication on 14 May, Israeli armed forces have reportedly killed at least 52 Palestinians near the Gaza border fence.

More than 2,400 have been injured, with at least 39 in a critical condition. The death toll is expected to rise.

The protests on the border were heightened due to the moving of the US embassy to Jerusalem. It appears that no Israelis have died so far in the violence that the BBC has described as “clashes”.

The death toll on 14 May is the highest since the “Great March of Return” protests began.

The Palestinian Ministry of Health has said that at least 74 children, 23 women and eight journalists have been injured.

Over 35,000 protesters marched towards the border fence, coming within several hundred metres. Stones were thrown as tyres were burnt, creating clouds of black smoke. Over 700 people were hit by live rounds in the subsequent gunfire from Israel’s armed forces, reports have said. Troops also fired teargas and firebombs at the protesters.

Green Party MP Caroline Lucas described the scenes on the border as a “bloodbath”. Calling on the UK to halt arms sales, Lucas tweeted:

There is a bloodbath happening in Gaza, with hundreds of Palestinians shot by Israeli forces.

The British Govt must act with others to urge Israel to stop this violence – and we must immediately end the arms trade with this deeply repressive regime:https://t.co/4UD0Go0WRa

According to Campaign Against Arms Trade (CAAT), £221m worth of weaponry was licensed to Israel by the UK in 2017 alone.

The Israeli army has claimed its troops were acting “in accordance with standard procedures”.

As the army launched its offensive at the Gaza border, US president Donald Trump sent a recorded message to a ceremony in Jerusalem to celebrate the opening of the new US embassy.

The US was criticised internationally for the decision to relocate the embassy. World leaders have said the move will increase tensions throughout the region.

Egypt and Jordan’s leaders have both condemned the action by Israel’s forces.