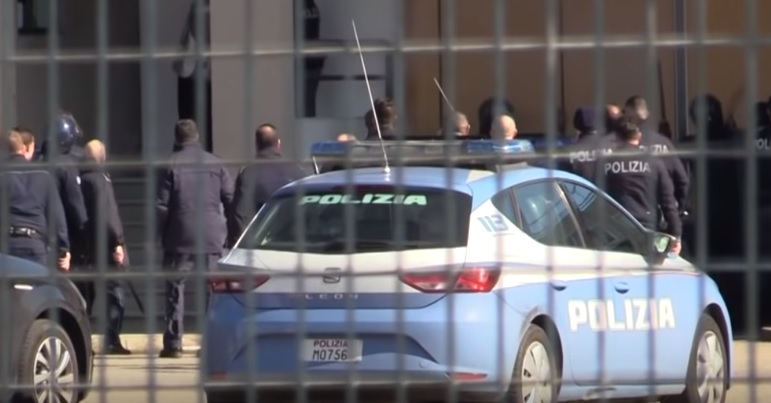 Revolts have been taking place in prisons across Italy after the Italian state announced limitations on family visits. The riots broke out on 8 March, and have reportedly involved 6,000 prisoners at “facilities around the country”.

The state has said the restrictions, which includes bans, on family visits is part of its attempts to control the coronavirus pandemic.

Italian prisons are chronically overcrowded, which could make inmates and staff more vulnerable to the coronavirus contagion. They hold about 61,250 inmates, about 10,000 more than they were built to accommodate.

‘The only measures taken are to penalise’

According to a statement by an Italian anarchist group prior to the prison revolt:

We have been informed that no measures have been taken to prevent the epidemic [in prisons].

No sterilization of the environments, no spreading of hygiene rules, no temperature checks (and not even the self-declaration of having had contact with subjects at risk) by those who enter the institute, no screening of prisoners.

All in a situation of chronic overcrowding where respect for the distance of one meter between one person and another is unimaginable.

The only measures taken are to further penalize the prisoners such as preventing the entrance of volunteers, the blocking of leave permits and the suspension or sharp reduction of visits with relatives.

Protests in at least 27 jails

Prisoner protests took place in at least 27 prisons across Italy and 50 prisoners escaped.

During the #Foggi protest, 50 inmates escaped by breaking the front gate. 30 were later rounded up in the vicinity by police. But 20 escaped successfully after stealing staff vehicles. An "apocalyptic situation", say prison officials #carceriinrivolta https://t.co/Gs0Z0P7wsQ

Prison guards were also reportedly taken hostage during the riots.

On 10 March, Reuters reported that 12 prisoners had died since the start of the uprising.

But the death toll may now be higher. One commentator tweeted:

🔴 Two other inmates founded deads in the jail of the Dozza in Bologna: so the death toll in the repressed revolts in #Italy's packed and infamous prisons during the present #StateOfEmergency on behalf of #COVID19 escalates to 15 so far #carcerinrivolta 🔴https://t.co/mV8biBXqUs


One report from 8 March detailed what happened during a revolt in St Anna prison in Modena:

Towards the evening, in front of a large antiriot contingent, cops emerged escorting some of the prisoners, striking them while handcuffed; some were on stretchers.

Already around that time some had escorted a bag containing a dead body.

Demonstrations were held in solidarity with the prisoners. In Messina prisoner families reportedly blocked roads in protest.

At one prison in Rome protesters gathered in solidarity with the prison revolt. A banner draped over a police barricade read ‘Free them all’.

Prisoners in Milan climbed on the roof of the jail with a banner reading ‘indulto’, meaning ‘pardon’. They were calling for release as a response to the coronavirus crisis.

Their call was echoed in this statement from anarchists in Rome and Lazio:

We are for the abolition of all prisons, we consider them to be the bad conscience of society, the instrument used to avoid solving the social problems that result in the need to commit crimes in order to survive.

We consider it intolerable that, in an emergency situation which, in the name of defending against contagion, freedom of association and freedom of assembly are eliminated, that there are no measures to restore freedom to those who live in a situation of restriction and would be certain victims of an epidemic behind bars.