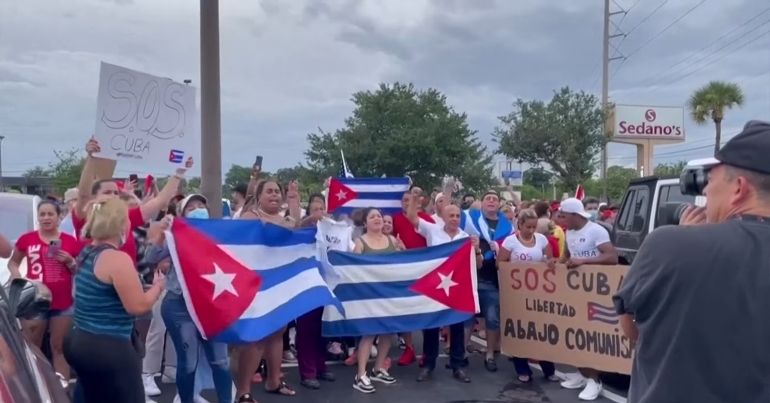 MPs are calling for the end of the US blockade of Cuba after the big protests at the weekend.

On 11 July, thousands of Cubans took to the streets to protest the government and the lack of food and medicine that has been made worse by coronavirus (Covid-19) and the US embargo of the communist-led country.

Some protestors wanted president Miguel Díaz-Canel to step down, calling for “freedom”.

Díaz-Canel said the US blockade of Cuba had caused the economic crisis, and urged revolutionaries to take to the streets against protestors.

Bolivian news agency Kawsachun News reported that some Cubans were taking to the street in defence of the revolution.

Writing for Jacobin, columnist Ben Burgis said it was “far too early” to define factions amongst the protestors, but said lifting the embargo would best help Cubans.

If you care about Cuba, the key demand is for Washington to end its economic war on the country, just as the UN has repeatedly demanded.

The single most important thing that US politicians can do to help Cuba is to call for their country’s near 60-year blockade to be lifted – as the world has voted for time after time at the United Nations.

The US first imposed an embargo on arms sales to Cuba in 1958 during Fulgencio Batista’s presidency. After the Cuban revolution in 1959, the US imposed a “near-full trade embargo” in 1960. In 1962 after the Bay of Pigs invasion, the Kennedy administration prohibited all trade to Cuba.

The United Nations (UN) has made 29 resolutions calling for an end to the US embargo, most of which the US has voted against other than a single abstention by Obama in 2016.

The two countries had a slightly better relationship during Obama’s presidency. Obama eased restrictions on travel, removed Cuba from the terrorism list, reopened the US embassy in Cuba, and visited the country.

After Trump’s election, he reinstated the travel and some business restrictions, and later announced more sanctions and put Cuba back on the US list of state sponsored terror.

As of June 2021, the Biden administration has continued to vote against UN calls for the end of the embargo.

The effect on Cuba

According to the UN, the trade embargo has cost Cuba more than $130bn over the 60 years it has been in place.

Cuba’s economy has been struggling, made worse by the pandemic restricting its tourism income. Its sugar harvest has also not earned as much as expected. Consequently, the government has not had enough foreign currency to make up for shortages.

Inflation has grown, and there have been shortages of medicine, food, and other products.

There have been reports that the government restricted social media platforms and arrested some of the protestors.

Biden tweeted to express his support for the protestors calling for relief from “repression and economic suffering”.

Several replies called for him to lift the blockade of Cuba to help its people.