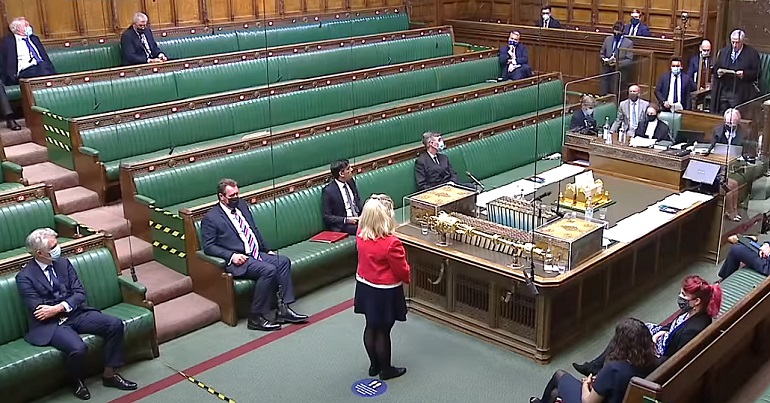 MPs have “blood on their hands” over their vote to cut foreign aid. That’s the view of one campaign group, as the impact of the decision becomes clear. But is the budget all that it seems in the first place?

As PA reported, chancellor Rishi Sunak put forward a plan that will see a reduction in aid funding from 0.7% of gross national income (GNI) to 0.5%. It’s a cut of around £4.4bn this year. The government wrote the commitment to 0.7% into law. The Tories then restated it in their 2019 manifesto. But the government has now ditched it in a supposed attempt to save money in response to the coronavirus (Covid-19) pandemic.

So, on Tuesday 13 July, the change came to parliament. MPs voted by 333 to 298, a majority of 35, to cut foreign aid. But it wasn’t entirely smooth sailing for the government. 24 Tory MPs joined opposition parties to vote against the plan. Both Boris Johnson and Sunak said that the cut was only temporary. Under the new system, funding will only return to 0.7% if the Office for Budget Responsibility (OBR) believes the UK is not borrowing to finance day-to-day spending and underlying debt is falling. The chancellor noted that:

Whilst not every member felt able to vote for the Government’s compromise, the substantive matter of whether we remain committed to the 0.7% target – not just now but for decades to come – is clearly a point of significant unity in this House.

Today’s vote has made that commitment more secure for the long term whilst helping the Government to fix the problems with our public finances and continue to deliver for our constituents today.

But Sunak may well be performing an economic sleight of hand.

As PA noted, foreign aid will only return to 0.7% if the OBR allows it. The existing OBR forecasts run to 2025/26. In no year does the OBR forecast that the current budget will be in surplus. Moreover, it says net debt will not start to fall until 2024/25. In other words – the government will not return foreign aid to 0.7% any time soon.

It’s important to note that for many of the MPs who rebelled, foreign aid may not necessarily be about supporting the world’s poorest people. Some people believe that the government uses aid as ‘soft power’; that is, pushing British imperialist aims abroad. Socialist Appeal called foreign aid “the smiling face of imperialism”. Anthony Oakland noted that governments do not always use the budget to support the world’s poorest people. Instead, they said that foreign aid was:

used as a lever to encourage ‘trade liberalisation’. This of course means better access to profitable markets for corporations.

Sticking to the capitalist rules

those defending the aid budget don’t care a single jot about the world’s poor either. For them, foreign aid is merely a tool for exerting the ‘soft power’ of British imperialism.

This fact was revealed in a letter to the Financial Times, signed by big business groups… In it they stated that reducing the aid budget would “reduce the UK’s credibility” (on the world stage), and “hamper gains made on social and economic development, which are prerequisites for businesses to trade”…

In other words, if Britain’s diplomatic standing on the world stage declines further, these gentlemen’s bottom lines stand to suffer!

Even the archbishop of Canterbury said of foreign aid:

British aid efforts increase the UK’s soft power. They stabilise and support people in areas of instability. They strengthen the rules-based international order.

Soft power versus no power?

Even through the prism of foreign aid being about the British exerting influence abroad, the cut still seems illogical by Tory capitalist standards. As the British Academy wrote, the government:

should be aware that short-term gains in terms of improving a budget deficit will create long-term damage by withering the very assets on which soft power rests, whether at home or inside international organisations. International cultural relations are a long game and a matter of strategic relationship-building rather than short-term tactical advantage. There is thus the world of difference between using foreign aid, say, to buy influence or win contracts – both of which are dubious practices from all points of view – and investing in the institutions and practices which provide a platform for intelligent, constructive diplomacy.

“Blood on their hands”

Daniel Willis, campaigns and policy manager at Global Justice Now, noted the use of foreign aid as soft power. He said in a press release:

When the inevitable death and suffering from aid cuts hits the news, each and every MP who has voted to sever the UK’s 0.7% commitment should know that blood is on their hands.

The kind of chicanery this government has used to dodge its international responsibilities lays bare the myth that these cuts are needed to balance public spending during the pandemic. 0.7% was already proportional. This bill only commits the government to deeper cuts…[t]oday, claims of Global Britain ring hollow.

Charities previously warned that the funding reduction meant they were stripping back services. Now, we wait to see how the government’s cut of billions of pounds will further affect people globally. Moreover, it will be interesting to see how the changes will effect Britain’s capitalist soft power.