We all belong to the land. Now it's time to reclaim it. - The Canary 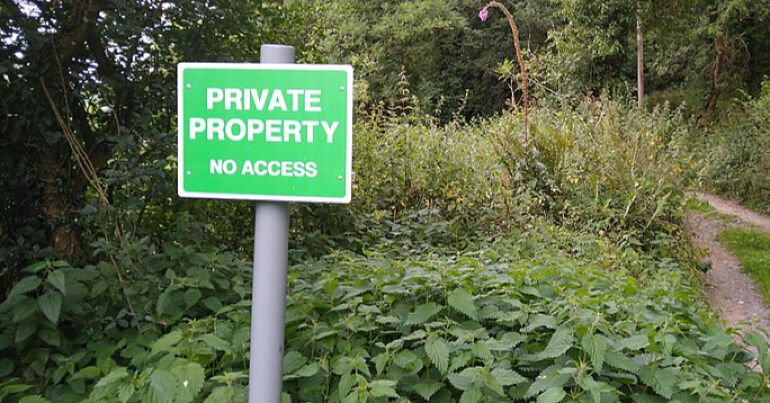 We have the right to roam over just 8% of England’s land. A massive 92% of the country is off limits, fenced off with barbed wire and ‘keep out’ signs. In a country with such massive social inequality, land means wealth and power. It’s a means of control. Without land, we’re wage slaves in towns and cities, disconnected from the Earth that we’re inherently a part of. But we all belong to the land. It’s in our nature to roam on it, sleep on it, grow food on it, forage on it, play on it.

A coalition of ‘free walkers’ called Landscapes of Freedom have come together to fight for our right to roam in England. They’re organising a mass trespass on 24 July on the South Downs in Sussex, and they want us all to join them. They say:

The trespass is being organised to call for a right to roam both locally and nationally, and for the restoration of the chalk grassland landscape across our Downs.

In 2000, the Countryside and Rights of Way Act gave us access to just 8% of England’s land, giving us the right to roam on certain landscapes like mountains and moors.

Nick Hayes, co-founder of the Right To Roam campaign, said:

Ours is a wild and beautiful island. But the vast majority of it is unknown to us because, by law of trespass, we are banned from setting foot on it. The Countryside and Rights of Way Act 2000 gave us a partial right to roam over only about 8% of England. That’s why we’re campaigning to extend the public’s right to roam, so that millions more people can have easy access to open space, and the physical, mental, and spiritual health benefits that it brings.

Dave Bangs, who is part of Landscapes for Freedom, said:

The partial right to roam, as enacted in 2000, brought relatively little new access land to most of lowland England and Wales, even on target landscapes of heath and down. Our woods, our farm fields, our streams and waterlands, and many of our lanes and tracks are forbidden to us. And on our local Downs landowners continue to exclude the public even on some sites where we now have a statutory right of access.

All sorts of damage to nature and historic landscape features take place unbeknown to us because we have no right to be there. If we cannot walk our countryside and Downland we cannot protect it.

Having the right to roam on just 8% of England’s land means that the vast majority of the public can’t use the land. Either we can’t access it, or people don’t have the wealth to travel to these small pockets of the country – let alone pay for accommodation. The act is inherently classist. After all, it is poor people living in cities who are least likely to be able to, say, go for a week in the Lake District.

Also, the act perpetuates racism, cutting Black and Ethnic Minority (BAME) people off from land that could be accessible to them, if only the law changed. BAME people currently make up only 1% of visitors to National Parks. Heading from the city to the hills can be a daunting task, especially if white people seem startled by your very presence.

Cherelle Harding is founder of Steppers UK, an organisation that “aims to encourage diverse and under represented communities to participate in outdoor activities”. Harding told UKClimbing:

I feel as though there is this idea of what type of person you have to be to enjoy the outdoors. Often this is portrayed as White, Male, upper/middle class.

This is false and this narrative needs to change from both the industry and within our communities.

England’s structural inequalities and disgracefully unequal land ownership aren’t going to be dismantled overnight. But extending the right to roam is a crucial step to make nature more accessible to all.

If you can, join Landscapes for Freedom to fight for this right. The mass trespass comes at a crucial time, where our remaining rights are being eroded before our eyes. The government is currently in the process of making “residing on land without consent in or with a vehicle” a criminal act. This new law will criminalise Gypsy, Roma and Traveller communities, who aren’t given enough legal sites to live on, as well as homeless people.

Landscapes for Freedom says the trespass:

will be an all-day event… with a chance to picnic, have fun, exchange views, and learn something of our local Downland and its rich and threatened wildlife.

Details of the exact location will be announced nearer the time.

We all belong to the land. Let’s claim it back, and reclaim an essential part of what it is to be human.