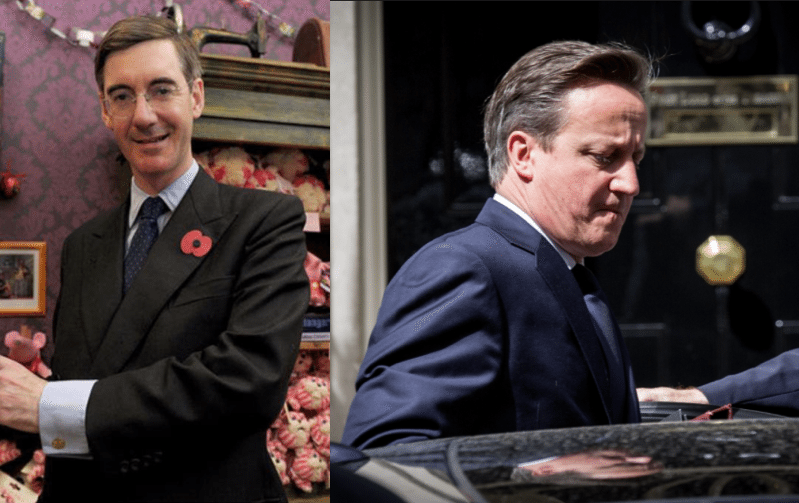 In a shock revolt, the Conservative Party has secured the forced resignation of David Cameron from his position as leader and Prime Minister. Replacing him in both roles will be Jacob Rees-Mogg, Conservative MP for North East Somerset.

The public became aware of the change when Mr Rees-Mogg appeared on Sunday’s Andrew Marr Show in the place of Mr Cameron, who had planned an extensive interview with Marr about recent rifts in the party over Brexit. Instead, a press release was issued at around 8am, informing the media that David Cameron had resigned, and Mr Rees-Mogg would be taking his place.

It’s time to draw a curtain over our attempts at compassionate conservativism. The public want to know that when they place their vote, their party does what it says on the tin. Labour have a proper lefty, we need a proper righty.

It was decided amongst the party that if we were going to select an MP that best represented the true heart of traditional conservativism – I would be it.

Mr Rees-Mogg is a devout Brexiteer, and is known for his hardline euroscepticism, enjoying dinners with the Traditional Britain Group who argue for the repatriation of non-white Britons, opposing same-sex marriage and being in favour of zero-hour contracts. He also campaigned for Somerset to get its own time zone.

Following the announcement, Mr Rees Mogg travelled to Buckingham Palace to ask permission from the Queen to form a government, which was granted. Thereafter came a prompt reshuffle, and a new all-male front bench.

From left to right:

Education: Graham Brady, Chairman of the influential 1922 Committee, who once resigned his position as Shadow Minister for Education after David Cameron opposed grammar schools.

Home Secretary: Michael Fabricant, best known for his blonde hairdo and threatening to punch journalist Yasmin Alibhai-Brown in the throat.

Chancellor: Justice Secretary Michael Gove becomes one of only two of Cameron’s front bench to remain, gaining a promotion to Chancellor. The only other survivor of the Cameron era is Iain Duncan Smith, who returns to his role at the Department of Work and Pensions. Duncan Smith told The Canary:

I literally can’t believe it. We have been fighting for this behind the scenes for over a year, terrified news would creep out before we got “The Mogg” into Number 10.

Things got even more nerve-inducing after my resignation. After that, I didn’t even have the joy of sanctioning plebs to keep me distracted. It’s been a really tough time. But wow, we did it!

Prime Minister Rees-Mogg later issued a formal statement detailing a rash of new policies which include:

Former Prime Minister David Cameron has not released a formal statement or held any press conference to remark upon his shock resignation. However, shortly after Mr Rees-Mogg’s Marr interview, smoke signals were issued in latin from Numbers 10 and 11 Downing Street which read:

This translates into two popular latin phrases. The first section being: “Holding a wolf by the ears”, which means the same as ‘holding a tiger by the tail’, a very risky activity. The second is: “Wise as far as his beard” – meaning a man who appears intelligent but is really not. Placed together, it seems Mr Cameron and Mr Osborne were sending a clear message to their latin-speaking colleagues. For non-Latin speakers, there came a third and final signal shortly before the removal vans trundled away from Downing Street, which read simply:

“You are all f*cked”