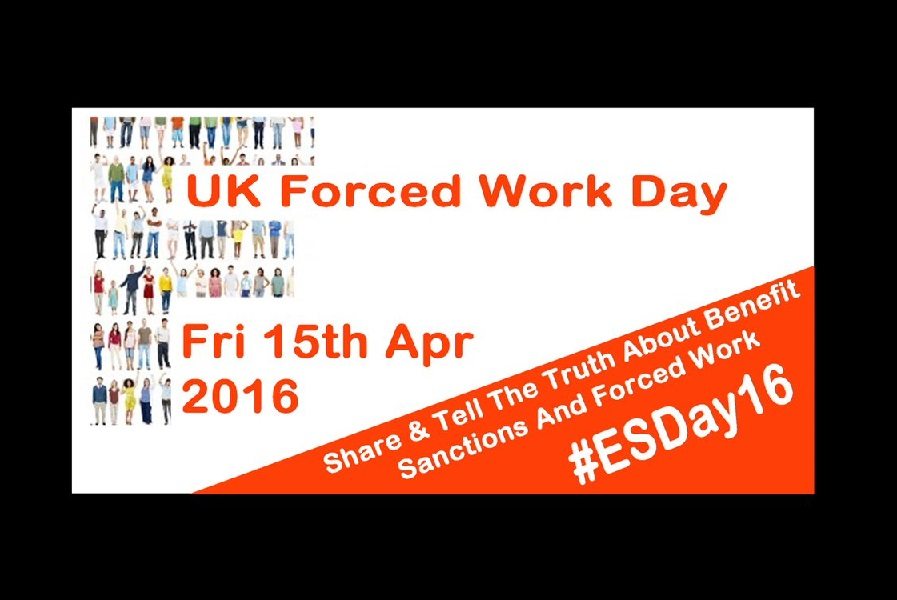 On 15 April 2016, organisations which deliver ’employment-related services’ launched the first national ‘UK Employability Day‘. On this day, they opened their doors to show others the supposed benefits of their schemes. But essentially, they were celebrating the benefit sanctions and workfare programmes implemented by the current Conservative government. Unfortunately for them, their #esday16 hashtag on Twitter was soon hijacked by those affected negatively by the way the welfare system is being run today.

With the March 2016 resignation of Secretary of State for Work and Pensions (DWP) Iain Duncan Smith, the government’s plans for welfare received a significant setback. The welfare-to-work industry is almost certainly worried about its future prospects at the moment, even though Smith’s successor, Stephen Crabb, seems set to steam ahead with further cuts to welfare provision. Just to be safe, then, the industry probably saw #esday16 as a perfect opportunity to improve its image.

But the truth is that no promotional drive is likely to make the companies exploiting government cuts seem any more benevolent.

It turns out that #esday16 was not the only benefits-related news on 15 April. Trussell Trust – a charity which aims to “end hunger and poverty in the UK” – reported that “foodbank use remains at record levels”, but rose by 2% between 2015 and 2016. A survey of 88 Trussell Trust foodbanks undertaken between March and April 2016 found that there was a strong link between changes in government welfare and the increase in foodbank users:

The government’s workfare programme, where unemployed people earn their benefits by working, is an example of how Westminster is actually pushing citizens to work for next to nothing, while lining the pockets of employers. Boycott Workfare claims:

Workfare profits the rich by providing free labour, whilst threatening the poor by taking away welfare rights if people refuse to work without a living wage.

The group has also provided a long list of the companies taking advantage of the workfare programme.

Under the current Conservative government, there have been some truly shocking examples of how benefits claimants are treated.

With the recent release of data about mortality in relation to incapacity and ESA benefits, we saw that 50,580 people died between December 2011 and February 2014. And of this number, 2,380 claimants died after being found fit for work and having their benefits stopped. In fact, one dead woman was actually told she was “too healthy” for sickness benefits.

In February 2016, meanwhile, the most severely injured survivor of the 7/7 bombings claimed that the DWP had interrogated him for ‘proof’ that he was disabled – even though he lost both legs, an eye, and his spleen in the attacks.

On 14 April, The National spoke about how one benefit claimant had been so “stressed by the aggressive attitude and implacable obstacles of the benefits system” that his confidence had been destroyed and his skills rendered useless. And this type of treatment is normal, according to Dr Felicity Callard – who is the Director of Hubbub, an international project involving scientists and public health experts funded by the Wellcome Trust and run from Durham University. Callard insisted in June 2015 that:

Overall, we have seen a rise in foodbank usage linked to welfare cuts. We have seen citizens being forced to do unpaid work for a small amount of benefits. And the welfare system seems to be doing more harm than good in many cases. In this context, it hardly seems like there is anything worth celebrating on #esday16.