Hunt's future is in serious jeopardy, as his key threat to junior doctors is challenged - The Canary 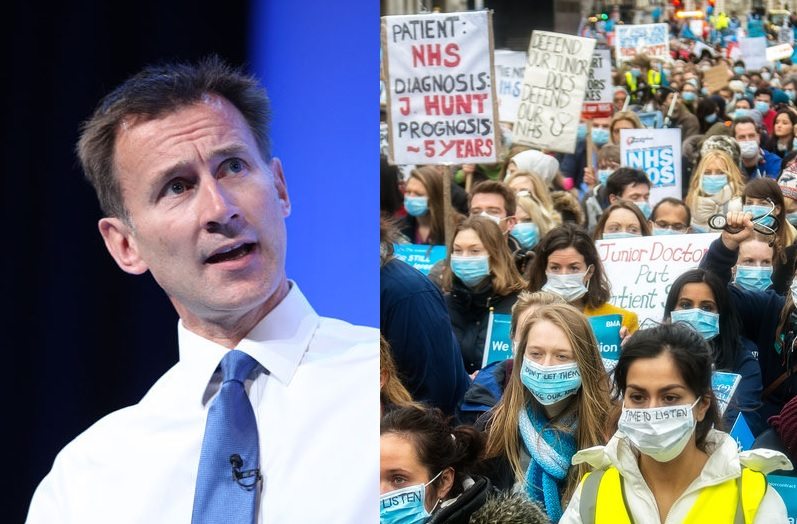 On the brink of a legal challenge against the imposition of new contracts on junior doctors, the veracity of Jeremy Hunt’s key threat is under dispute. Quite possibly because, despite repeatedly menacing junior doctors with the government’s “nuclear option”, he may have no actual power to do so.

The question has arisen due to a stark difference in wording between Hunt and that of his government’s solicitors, in a letter addressing the imminent legal action being brought against Hunt by a group of junior doctors. The letter notes that the Secretary of State for Health intends to “proceed with the introduction of a new contract”, is entitled to “take a leading role in negotiations” and “take steps leading to the introduction” of contracts.

At no point does the letter state that Hunt has the power to impose such a contract on junior doctors, which has been widely understood to be his position. The carefully chosen wording could vindicate the claims of the doctors undertaking the legal action against the Health Secretary. They argue:

The way the NHS is set up, the secretary of state is limited to a strategic, hands-off role, which is mediated through the mandate to NHS England and not by taking decisions about what should be in an individual junior doctor’s contract.

If Hunt is found to have exaggerated his authority over the controversial contracts, the legal case against him would be a sure win. It would also put his parliamentary position in serious jeopardy. In the Commons, Hunt’s defence of the contracts has been loaded with the language of enforcement. But, as the Shadow Health Secretary Heidi Alexander has noted:

If Jeremy Hunt is now claiming he isn’t imposing the contract, then this also raises the prospect that he has misled parliament.

Misleading parliament is a serious offence. The ministerial code clearly states that:

It is of paramount importance that Ministers give accurate and truthful information to Parliament, correcting any inadvertent error at the earliest opportunity. Ministers who knowingly mislead Parliament will be expected to offer their resignation to the Prime Minister

In fact, if it turns out that the government does not have the authority to impose the contract on junior doctors, the Prime Minister himself may face repercussions for backing Hunt’s claim in January.

The potential imposition of the contract has also led to unprecedented strike action by junior doctors, with a “full withdrawal of labour” scheduled for 26 and 27 April. All of this could have been avoided if a forced imposition of contracts isn’t possible.

Hunt has responded to the developments, first reported in The Guardian, on Twitter:

@guardian story on junior docs contract completely wrong: no change of approach, new contract will be introduced for FY1s from this August.

He also addressed parliament on Monday and insisted that the contract will be imposed on all junior doctors, according to ITV News.

However, as journalist Steve Topple has detailed, although doctors are considered an “essential” service, they are still employees. And just like any worker if their terms of employment are changed, they have the right to challenge them, and reject them – by not taking the job – if necessary.

But the junior doctors are not just concerned about their own terms and conditions. They are vehemently opposed to the new contract on the basis it is “bad for the future of patient care, the profession and the NHS as a whole”.

Now, due to the wording chosen by the government’s lawyers, there are serious questions over whether the Secretary of State for Health has the power to force it on them, as he continues to claim. If he doesn’t, both the contract and Hunt’s career are about to face a very dramatic reckoning indeed.

Support the junior doctors by marching with them on 26 April.