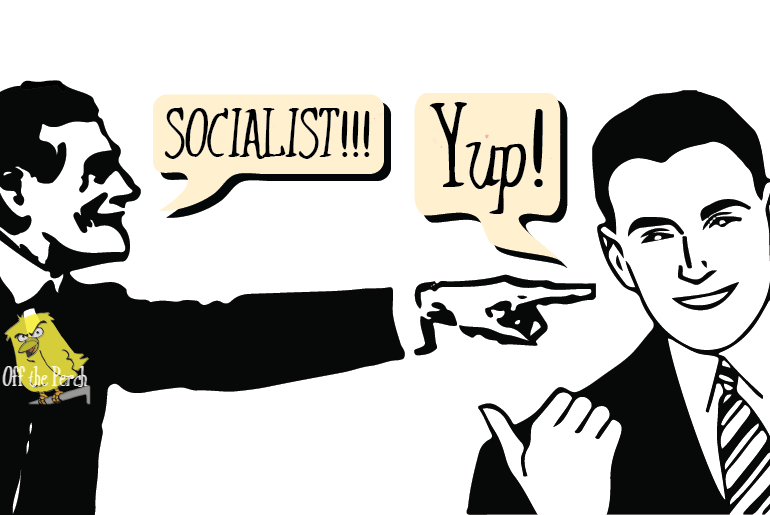 Off the Perch has been required, under a new government wheeze, to employ at least one right-wing writer. So we’re proud to welcome our new commentator, Frank Lee-Bull. He loves Margaret Thatcher, and casual racism.

The media and political establishment expressed bafflement this week at the newfound ineffectiveness of using the term ‘socialist’ as an insult, as Corbyn supporters became immune to being offended by it.

For decades, the establishment has kept any heretics who questioned the dominance of neoliberalism firmly in their box, with the threat of being labelled ‘socialists’. No one wanted to be thought of as some yoghurt-knitting, sandal-wearing, patchouli-stink wafting, unwashed hippy. Or (the second most popular variant of socialist) some rabid, Marxist-Leninist-Trotskyist, Castro-loving lunatic bent on the destruction to western civilization as we know it.

All this time, we ‘moderates’ have kept the lid on the wanton masses by ensuring that the only acceptable terms of debate on social, economic and political policy were on our turf. Well, I can reveal to Off The Perch readers that the lid on pandora’s box has been blown asunder, thanks to a sudden herd immunity to the term ‘socialist’.

Just as a normal vaccine provides just enough of a disease for a subject to develop an immune response, so has the ceaseless provocation of the establishment to everyone with a differing viewpoint.

I spoke to 42-year old management consultant Emily Beasley, one of the great unwashed, on the matter:

I suppose it was looking around at the other Corbyn supporters that relaxed me. Pretty much my entire office just paid the £25 to vote for Corbyn. The papers kept saying his supporters were these hard-left nutters – but all I could see around me were determined, compassionate, excited people who felt like we might finally have a voice. This is a chance to work together to improve the conditions of working and non-working people in the country, to refocus our national priorities on our social goals – housing, health, education, equal justice, social mobility.

Then I found out, that’s basically what a socialist is. They just like to share, and play as a team. I was brought up to think that was a good thing.

You see the brazenness of it? See how this work-shy Trot refuses to acknowledge herself as anything but a hardworking woman with a heart? Outrageous.

But this interview with Jack Crayon, a labourer from Kent, was even worse.

I voted UKIP last year. I’d basically been taken for a right mug by Farage. I was proper ragin’ cos my boss just laid me off so he could take on this Romanian bloke he could pay f*ck all, right?

Then my mate makes this really good point: it’s my boss that’s the w*nker, not the Romanian.

We could solve this whole thing if bosses had to pay everyone the same proper wage, even the immigrants. Job’s a good un. After that, I thought, ‘I wonder how much other stuff we could solve here by just making rules that are fair, and then sticking to them?’

I think this Corbyn bloke’s onto something.

If this doesn’t strike the fear of God into you, nothing will. This jobless layabout is basically talking about a revolution. A world where the rich are forced to give away their profits in ‘fair’ wages and taxes. I mean really, what the hell is this country coming to when a man is punished for winning?

FL-B: Oh do sod off with your politically correct fascism.]