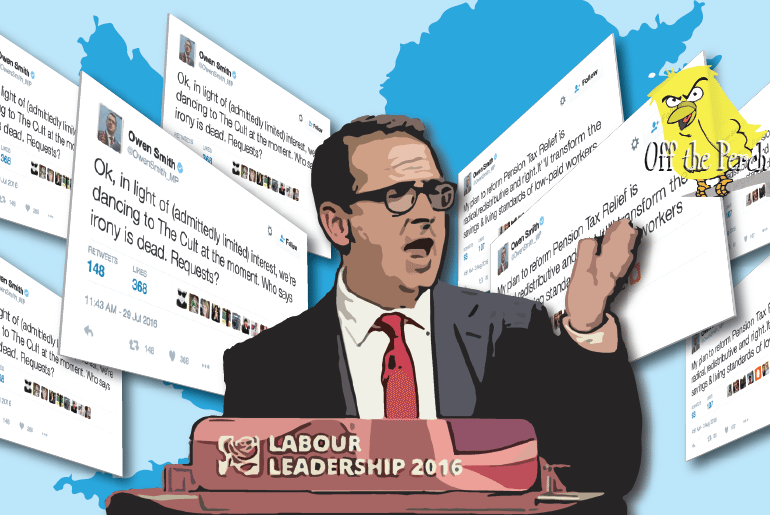 A series of since deleted tweets by Labour leadership challenger Owen Smith has been uncovered which shows a side of the Welsh MP that might have been best kept hidden, for the sake of his campaign.

The tweets were posted by Smith in the aftermath of the killing of Harambe, a gorilla shot and killed by workers at Cincinnati zoo after a child found his way into the enclosure.

While the public grieved for the loss of Harambe, Smith felt differently. 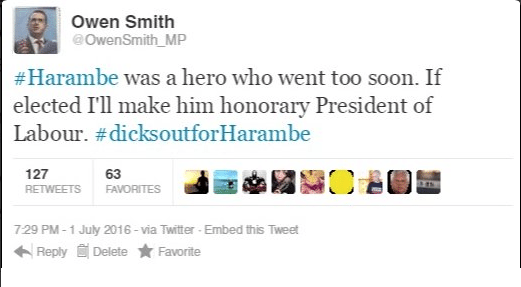 Shocking. It is absolutely outrageous that an MP in the house of-

OTP Writer: What really? But…it’s ON THE INTERNET!

Before and after, the tweets @OwenSmith_MP doesn't want you to see. #harambe #labourleadership @TheCanarySays pic.twitter.com/rB1UJVheCt

OTP Editor: You need to be wary. There are lots of fake accounts being set up on social media to fire bullsh*t from all sides. In fact, it turns out that half the pundits in favour of Owen Smith have been merrily retweeting a spoof Momentum account which has engaged in some major racism. Look at this.

OTP Editor: Here’s an anti-Corbyn Labour councillor cheering an attack on Black Lives Matter protesters by the same account. These are people protesting the killing of innocent people of colour by police. He even makes a pun on the movement’s motto ‘Can’t breathe’, which refers to the final words of Eric Garner – who was choked to death in public by police officers in New York.

Not EDL. A Labour Councillor. pic.twitter.com/fBlCgj7XhN

OTP Writer: Hang on. Aren’t these pundits and politicos supposed to hate bigotry in all its forms?

OTP Editor: *sighs. Here’s how one of those pundits actually responded when a Jewish person asked him to stop using his religion as a political football.

OTP Editor: Keep up…remember all this:

The 10 lies most told about Jeremy Corbyn – with full corrections. pic.twitter.com/GO6OMXRARo

OTP Writer: So hang on. These pundits and politicians accuse Corbyn supporters of being conspiracy theorist bigots. But they continue to print and reprint things that haven’t happened, and make and share bigoted remarks all the time?

OTP Editor: That’s about the size of it.

OTP Writer: Doesn’t that make them, like, the world’s biggest hypocrites?

OTP Writer: So what can we do about it?

OTP Editor: Maintain your standards. Be unafraid of unravelling the conspiracies of mutual self-interest which have these people circle their wagons against the threat of a new kind of politics. Oh, and don’t just share any old sh*t without fact checking it – whoever writes it.

OTP Writer: So what do I do with this Smith story then?

OTP Editor: I think the reader has already grasped the significance. Let’s just leave it with them.