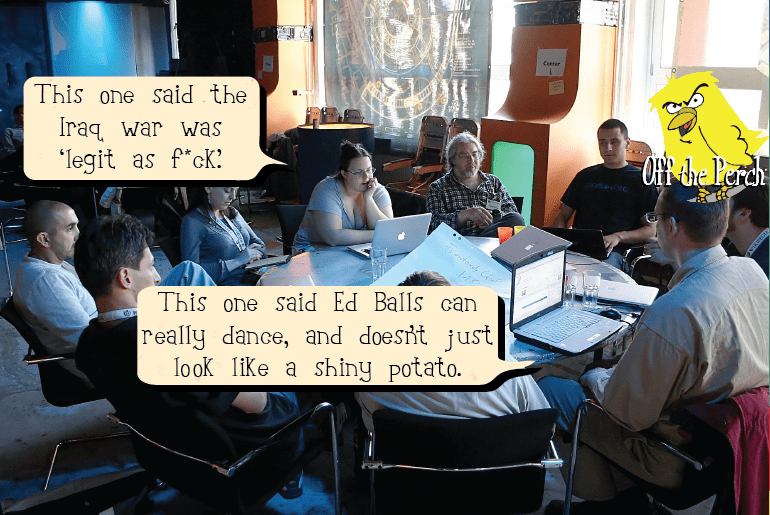 Several ex-Labour members have been blocked from joining the Liberal Democrats after it was discovered they had supported another party online.

We spoke to the Liberal Democrats’ purge-meister general to find out how this latest drama unfolded:

Well obviously, when a person attempts to join our party, we look into their history and make sure they’ve never supported another party before ours. Or ever even mentioned another party. Or used the word ‘green’ in a sentence. Or displayed an interest in Foo-Fighter-in-chief Dave Grohl – a man who brazenly formed his own band despite once having been in a different band.

We don’t tolerate that bullsh*t, thank you very much!

Of course, it does make it very difficult to win over voters when you’re fundamentally opposed to the idea of voters being won over, but – well…

What was our logic again?

Hmm. I suppose you wouldn’t eat a sandwich that someone else had eaten, would you? And that’s what these promiscuous voters are like – like regurgitated cheese Ploughman’s. Although we do hope that they’ll consider voting for us in future. Albeit without actually doing so. Because we hate them. As they’re scum.

We also spoke to some of the spurned ex-Labour supporters to see what they thought of the situation:

Personally, I think it’s wonderful, and it’s reassuring to see a party so dedicated to turning away new members. The Corbynistas don’t realise that ideology isn’t important in politics – winning new voters is. That’s our ideology, anyway, and that’s why we had to purge them and their potential new votes. Because they didn’t have the right sort of ideology. And we’re all about the votes. You get it?

The problem is that we can’t even re-join Labour now, as we publicly said we were joining the Lib Dems online. Although I do of course agree with these purges. Which is why I never complained about them as they happened.

Thankfully for these unaffiliated ex-members, there is one political party that will be happy to take them, and the good news is that they already share several of the same interests – namely: