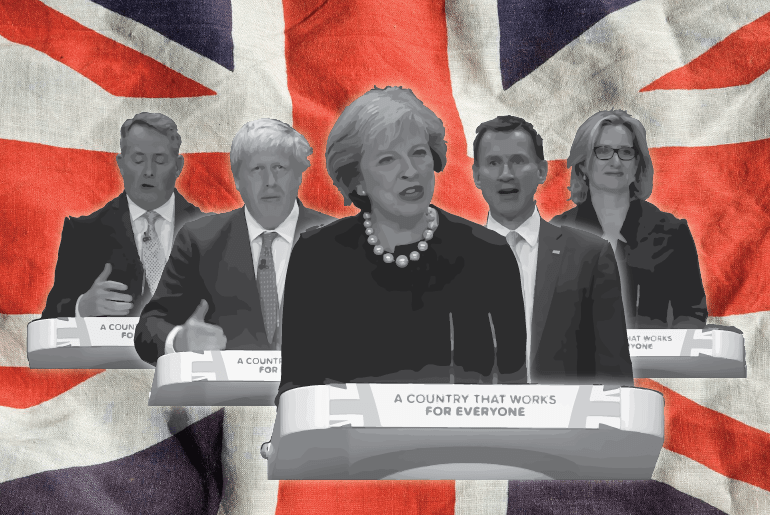 When Theresa May inherited post-referendum Britain, she had two potential directions in which she could take us:

And of course, being a Conservative, Prime Minister May has chosen the latter.

Which is why the Conservative Party Conference has seen such horrors as Jeremy Hunt telling foreign doctors that they’re only welcome here for as long as it takes us to train some more of our own. The problem with this being – why on Earth would they wait until then?

Because the people in question are highly trained and motivated people who have already emigrated at least once. And knowing what they know – that they are officially no longer welcome here – why wouldn’t they just go now, and leave us to tend to the festering wound that we’ve inflicted upon ourselves? You know, before we decide that merely banishing all of the doctors is a bit too liberal and that really we should be eating them or something. We will struggle to attract more Brits to join the National Hunt Service after all, but maybe if we eat the brains of doctors, we will become doctors. It could happen. The experts will say that it won’t, of course, but that’s as good a reason as any to go ahead and do it in this day and age.

Another reason why we’ll struggle to attract more home-grown doctors is because they’re part of another group that the government is going after – a group which Theresa May has branded the “liberal elites” – a group which includes:

The obvious reason why this hornet’s nest is being drop-kicked now is because the Tories know that, in the short term, Brexit is going to be a disaster (and that the short term could be anywhere between 2 years and a decade). They especially know this now because, as soon as Theresa May admitted that ‘Hard Brexit’ was on the cards, the pound fell like a dead koala bear – hitting a 31-year low and still falling.

Theresa May is doing for the economy what Cillit Bang does for grime on pennies pic.twitter.com/Z1TUloljRN

In fact, Britain dropped from being the fifth largest economy in the world to sixth during the Conservative Party Conference. For a party which lives and breathes capitalism, and a right-wing media that is obsessed with Britain’s place in the world, it seems odd that they seemingly aren’t worried about the fact that our quantifiable wealth falls every time a Tory opens their mouth. In fact, they seem to be revelling in everything that’s coming out of this conference – almost as if they suspect Great Britain will in fact become greater – albeit only for themselves and their friends.

The person who got it most wrong at the conference was Liam Fox, who claimed that the government would “like to be able to give a reassurance to EU nationals in the UK, but that depends on reciprocation by other countries”. He then claimed that any other approach “would be to hand over one of our main cards in the negotiations and doesn’t necessarily make sense at this point”.

What Fox got wrong, however, wasn’t that he gave the game away in his typical, jabber-mouthed fashion, but that he thinks such reassurances haven’t already been rescinded. We’ve already announced that we’re ideologically opposed to the idea of foreign people coming over here to save our lives, so how could any non-native person here possibly feel safe? We’re also proposing to name and shame businesses for employing foreign workers, as if they were an industrial problem like asbestos or chemical dumping. So how could any non-native person here feel valued?

At this point, it would be impossible for us to reassure EU countries that their nationals are safe, because they blatantly just aren’t. In fact, if the EU has any foresight, it’ll label Britain a tourist no-go zone, and start airlifting people out of here like something from the fall/liberation of Saigon.

The raw and swelling hatred that has been incubated and raised in this country is pretty much all that the Tories have to work with if they want to stay in power. We can’t become a manufacturing powerhouse, because we sold off all our industry in the Thatcher and Blair eras. We can’t be a global gateway to Europe, because the EU doesn’t want some surly middleman acting as an intermediary between themselves and foreign investors. We can’t even hope for the special relationship with America to persist, because that closeness was predicated on Britain doing what it was told, and Brexit was certainly not okayed by the Prez.

We can hate, though. And this hatred will be used to hide the true shape of the swollen Tory beast, as it drags itself across our green and pleasant land to give birth to the future.

These hatreds will not be extinguished by a Tory government, because they have no interest in removing the disparity that fuels them – even when they’re not explicitly fanning them for their own self-interests. Neither will they be alleviated by a Labour opposition that softly panders to these bullsh*t UKIP fantasies, because if there’s one thing that people in this country hate more than anything right now, it’s blatant political insincerity.

What we need now is a radical alternative. Because the radical reality we’re faced with is going to make the Thatcher years look like an episode of the Great British Bake Off.