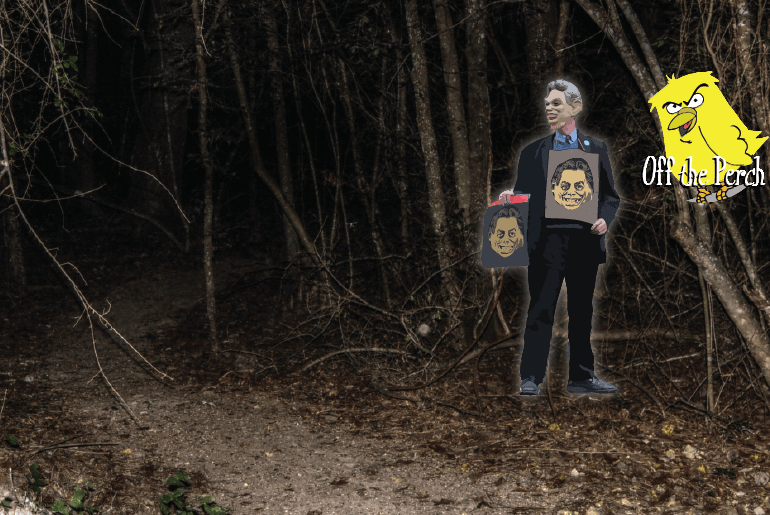 Although the sudden appearance of hundreds of clowns is the weirdest global event of 2016, it still pales in comparison with what has been happening in Westminster – namely the appearance of the only thing more universally unsettling than a clown.

A masked lurker began appearing outside the Houses of Parliament last month. Although protesters commonly wear Tony Blair masks to protest illegal wars and the collusion of corporations, media, and government, there was something a bit off with this impersonator from the start.

For one, he never actually protested anything – he just appeared behind politicians and stood there staring at them – his dead eyes boring into their sold-out souls like a maggot going at a tainted doughnut. He also didn’t say anything: he just loudly breathed in and out – as if he was draining them of their political essence – as if he was feeding on them.

The police were eventually called to hunt the creature down after it appeared behind a Tory minister – a minister who responded to the fright by throwing his assistant to the floor and then running away screaming. Following a brief search, they surrounded the masked-thing and made him remove his mask – revealing what nobody in the world could have suspected – that the creature was Tony Blair himself.

Once he was back at the station, Blair admitted that he was having a hard time dragging himself away from UK politics, and that he still couldn’t believe the UK people no longer liked him. He considered having plastic surgery to re-enter politics – he even considered buying an afro wig and false moustache – but his ego would not allow him to pose as someone else – as someone less.

Eventually, Tony realised that he could wear one of the rubber masks that protesters love so much – allowing him to blur the lines between being Blair and not being Blair. At first, he simply wanted to get close to the Houses of Parliament – to smell the heady mix of disappointment and corruption that pours out with every tipsy MP. The act became an obsession, however, and soon Mr Blair was there every night – stalking members of parliament like a guilty conscience.

Just watching wasn’t enough after the first few times, which is why he clubbed George Osborne with a rock and then ate him. This was perplexing to the investigators, as George Osborne wasn’t even missing, although Babyshambles had reported Pete Doherty missing after he failed to return home from a Westminster funeral.

The police called in some of the country’s top psychologists to try and analyse Mr Blair. They quickly agreed that they couldn’t handle an ego of his size alone, and so they called in Europe’s top psychological practitioners to help. This still wasn’t enough though, and by the end of the third day, hundreds of the world’s most prestigious psychologists were still attempting to find the edges of his vast and unfathomable psychosis.

Unfortunately, the police were forced to let Mr Blair go before any headway was made, as it turned out he had written into British law that he was above culpability – because:

I’m Tony ‘effing Blair, goddamnit  – the man who single-handedly won three-elections, invented Britpop, and heroically liberated a million Iraqis from the struggles of this mortal coil.

Even more unfortunately, the police officers and tax-payers present had to give him a £20 note each on his way out, because greatness doesn’t pay for itself you know.

As he left, Tony looked back at the terrified police and health professionals and said:

I must go now. The people need me.

He then put his mask on and went to serve Great Britain in the only way that he knows how – by lurking on the periphery of UK politics and creeping everyone the f*ck out.