Trump asks Muslims to report what they see, and their response is brilliant [TWEETS] - The Canary 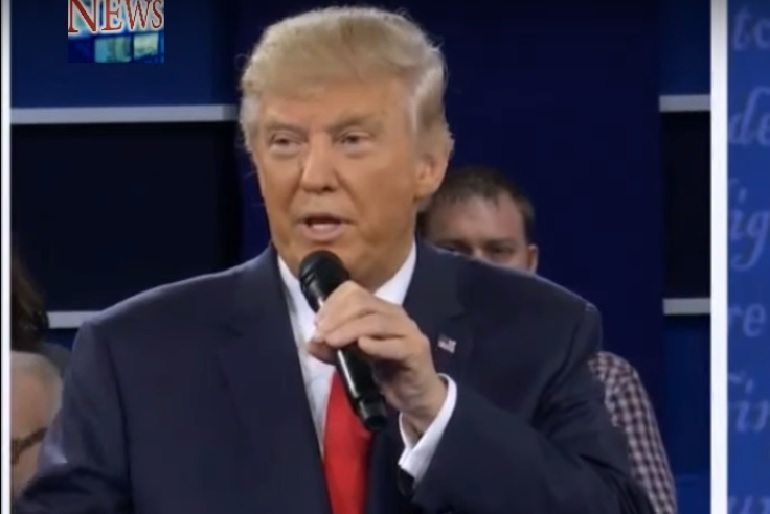 As US presidential candidates Donald Trump and Hillary Clinton debated on 9 October, one Trump answer involving Muslims prompted a hilarious response on Twitter, with the hashtag #MuslimsReportStuff.

The jury is still out on who won the second presidential debate in St. Louis, Missouri, at least when it comes to the two candidates on stage. But one particular moment of weakness for Trump was when an audience member asked him the following question:

There are 3.3 million Muslims in the United States, and I’m one of them… With Islamophobia on the rise, how will you help people like me deal with the consequences of being labelled as a threat to the country after the election is over?

You’re right about Islamophobia, and that’s a shame. But one thing we have to do is we have to make sure that because there is a problem, whether we like it or not — and we could be very politically correct — but whether we like it or not, there is a problem and we have to be sure that Muslims come in and report when they see something going on. When they see hatred going on, they have to report it.

The question and answer prompted one social media user to send this tweet:

I'm a Muslim, and I would like to report a crazy man threatening a woman on a stage in Missouri. #debate

This kicked off a wave of Muslim reports with the hashtag #MuslimsReportStuff:

I think my sister drank orange juice straight out of the carton, will continue to investigate #MuslimsReportStuff

They felt compelled to expose the truth about Muslims:

You don't want to know what we actually put in hummus. #MuslimsReportStuff

"Falafel" actually means "kill all the infidels". We've kept that a secret all this time. #MuslimsReportStuff

My girlfriends who wear hijab tuck their cell phones between their scarf and ear for "handsfree" driving. #MuslimsReportStuff

But some of them got pretty serious:

I am bullied and harassed by Trump supporters EVERY DAY. #MuslimsReportStuff

I'd like to report that we don't know more about terrorism because we're Muslim, and just as clueless as everyone else 🙄 #MuslimsReportStuff

I'd like to report a man with a cheetos face mask is threatening the American value of diversity and inclusion. #muslimsreportstuff

And some reports came in of the other problems in America:

Essentially, Trump’s response to the audience member’s question was inadequate. Muslims already work actively in their own communities to tackle extremism, as well as with law enforcement. And while neither candidate really addressed important issues in the debate, Trump’s continued focus on ‘Muslims’ as a problem risks dividing the US even further.