In a moment of pure karma, David Cameron has been given the Benefits Street treatment [VIDEO] - Canary Workers’ Co-op 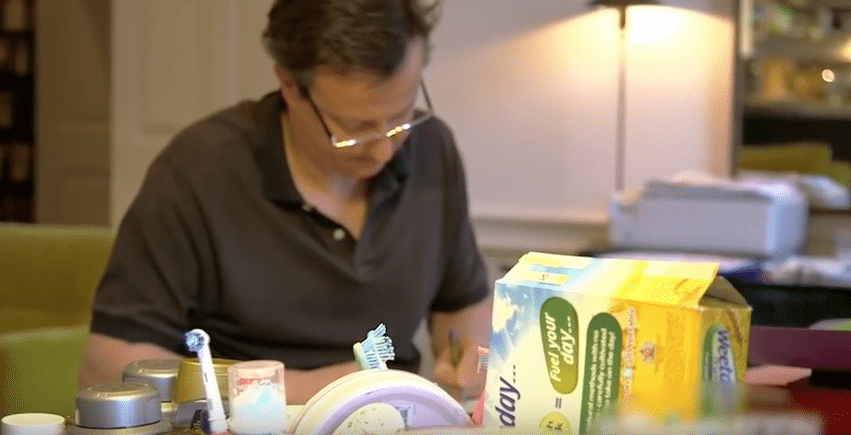 In ‘David Cameron: Unemployed’, video jokesters Funny and Share splice clips from ‘A Day in the Life of David Cameron’ with a clipped, poverty-porn-style voice over. The end result is a vision of a sad, jobless Dave moping around the house with his cat.

But Benefits Street was just one in a long and sad list of poverty-porn programming aired during Cameron’s tenure. Channel 4 also brought us Skint, Benefit Busters, How to Get a Council House, and Benefits Britain. The BBC even chipped in with We All Pay Your Benefits. This list is not even exhaustive. Just some of the lowlights, if you will.

All of these shows, intentionally or otherwise, feed into a myth that the UK is some sort of paradise for benefit cheats.

In reality, according to the government’s own figures, benefit fraud amounts to just 0.7% of all claims. The total cost of benefit fraud is £1.2bn a year – this is less than half the annual cost to the Department for Work and Pensions of administrative errors. In short, the government spends twice as much money fixing typos than it does on fraudulent benefit claims.

But you wouldn’t know that from watching these shows. Far from it. You would be left with the impression that Britain was facing a benefit fraud epidemic.

The HMRC puts the gap between taxes due and taxes received at £30bn a year. A recent Oxfam report put the figure at £100bn. These are massive sums, which would allow the kind of investment and support that straps rocket boosters to the economy. Instead, they’re being hoarded in offshore tax havens.

Yet although tax evasion is up to 100 times more significant an economic issue than benefit fraud, it receives a tiny proportion of the air time.

This allows the government to avoid tough questions about why, exactly, it is reducing the burden of taxation on the wealthiest, who are already paying least. It also creates a public mood that welcomes, and even demands, a government crackdown on those claiming social security.

There’s a word for media programming which is used to distort the public mood in favour of a political goal by using misrepresented data. It’s propaganda. And all this point-and-judge poverty-porn programming, with its misleading statistics and sarcastic voice overs, is just that.