As Southern Rail tries to sue its own workers, its passengers are taking the Tories to court [TWEETS] - Canary 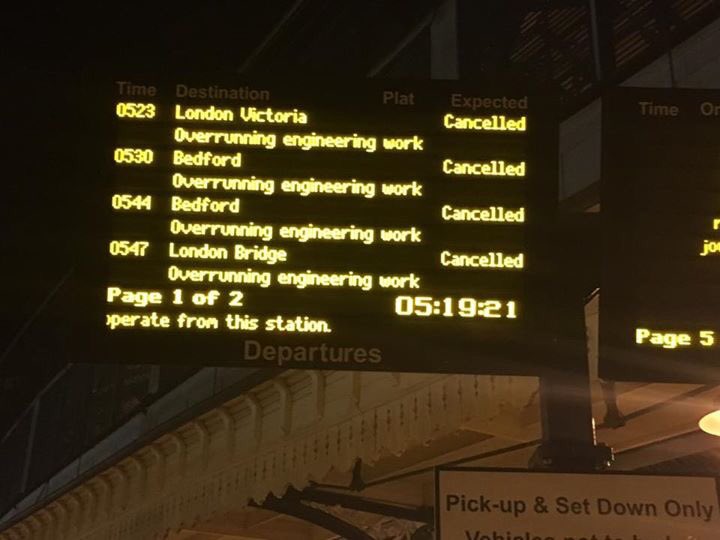 A three-day strike by the Rail, Maritime and Transport (RMT) union began on Tuesday 11 October on the Southern Rail network, as a protracted industrial dispute with the train company over jobs, working conditions and passenger safety rumbled on. But while Southern Rail was threatening legal action to stop the strike, its passengers were making legal moves of their own – against the Tories.

Taking the Tories to court

The Association of British Commuters (ABC) is seeking to bring a judicial review against the Department for Transport (DfT). This is a legal process where the High Court can review the decision-making process of the DfT in relation to its dealings with the rail company. If the government is found to have not fulfilled its duties, the court can declare DfT’s actions unlawful. This will stop it from continuing its course of action, requiring it instead to take steps to resolve the crisis.

The ABC grew out of grassroots efforts among angry southern commuters. As the situation got worse, the group decided to take legal action. ABC is seeking advice from Devonshires Solicitors LLP on options for issuing a judicial review. The solicitors are looking into the circumstances around the rail crisis, with a view to applying to the High Court to start the process.

They set up a crowdfunder in September to raise £25,000 to fund the action. And, a few days ago, they smashed their target, collecting £26,290. This means that legal action can begin. And with Southern Rail’s repeated failings, the ABC have a lot of work to do.

Southern Rail has hit headlines on numerous occasions this year. The parent operator of Southern Rail, Govia Thameslink, is rated as the worst rail company for punctuality, with just 81.5% of trains arriving on time. It was named the worst rail company in the National Rail Passenger Survey. As The Canary previously reported, ticket prices are set to go up by 1.9% in England, Scotland and Wales from January 2017. And as strike action hit Southern Rail on Tuesday, commuters were plunged into further chaos as engineering work overran:

This is not what passengers pay £1000's a year for. #southernfail Will @SouthernRailUK blame @RMTunion for this today? #southernstrike pic.twitter.com/9IgmgqNkDJ

Southern Rail appeared not to be ready for the strike action:

One passenger implied that Southern Rail didn’t seem to care:

Welcome to Brighton the train to where you want to go is currently…who knows and frankly we don't give a 💩 #southernfail #SouthernStrike pic.twitter.com/3fKSMXTxtO

The Canary also reported in September that the Conservatives had announced they would subsidise the private company to the tune of £20m in an attempt to sort out the rail operator’s mess – the public already subsidises Southern Rail by £40m each year. The company’s profits in the meantime are soaring, as is the pay of its Chief Executive.

As Caroline Lucas MP outlined in a statement to an ABC protest on 29 September, Southern Rail’s conduct has been unacceptable to many:

It’s no exaggeration to say that… Southern Rail is causing real damage to many of my constituents. Enough is enough. The government cannot keep letting Southern… off the hook, leaving communities and businesses… genuinely suffering. Because let’s not forget that this isn’t just about Southern – the government has the power to hold the rail company to account.

And it’s this letting of Southern Rail off the hook which underscores the ABC legal action.

Lawyers acting for the ABC have been in contact with the DfT for several weeks, submitting Freedom of Information (FOI) requests to establish whether the government has acted appropriately. Specifically, they want to know whether Southern Rail’s standard of operations has breached its contract; and if it has, why the government has done nothing about it. Speaking to The Canary, ABC organisers Summer Dean and Emily Yates said:

Thank you to every single person who has supported and donated to our campaign. Reaching the £25,000 target is a huge achievement and a true indication of the strength of public feeling against the Southern Rail crisis. The public have a right to know why they have suffered such daily stress, inconvenience and danger.

The ABC is a grassroots campaign now expanding rapidly. We, the commuters and travelling public have been ignored by Southern Rail and the DfT throughout the summer. We must take hope and strength from the great success of our legal crowdfunder and urgently insist on being heard as the Southern Rail infrastructure continues to collapse around us.

With three days of strike action continuing, which RMT staff are well within their rights to do, the chaos for passengers seems never-ending. But it appears that staff and commuters alike are generally in agreement: Southern Rail is responsible for a failing operation that’s rapidly running out of steam, and off track.