Daily Mail readers respond to news that a migrant has been killed, and bring shame on us all [IMAGES] - Canary

The Daily Mail comments section is not somewhere most people go expecting considered, open views on current events. But even by their standards, a new low has been reached.

On Monday 10 October, an Eritrean man and his wife  – both migrants – were run over in Calais by a British motorist. The wife was seriously injured, the husband was killed. It was the 14th such death this year.

For many, it epitomised the plight of people migrating and seeking refuge around the globe – fellow human beings, desperate to find safety and dreaming of better lives. 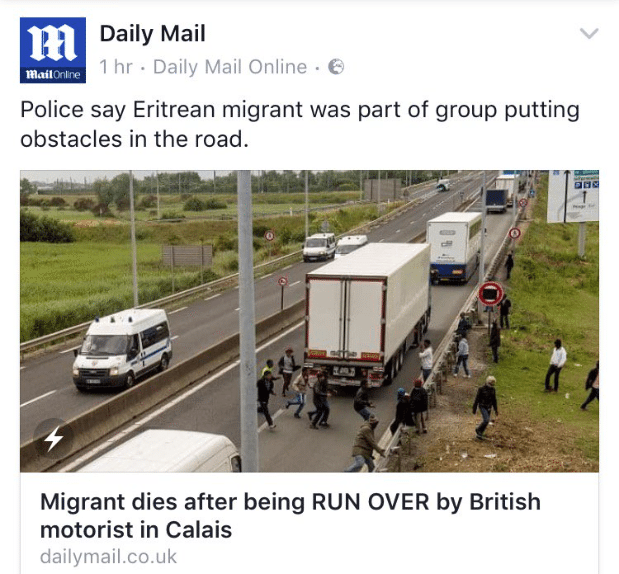 But this was not the case for many readers of The Daily Mail. Their reaction was somewhat different. Some of the most notable comments read: 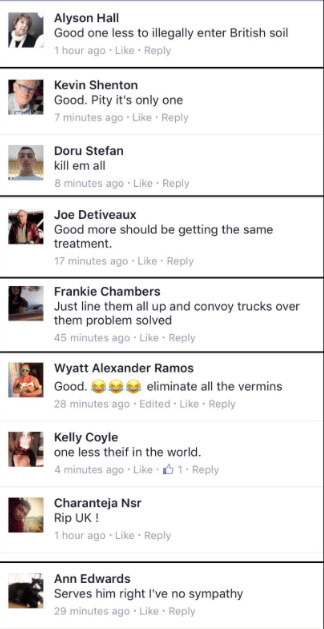 You have to search long and hard for any comments which express even a modicum of respect or consideration for how this man and his wife ended up on a motorway, thousands of miles from home, desperate to find a new place to build a life worth living. The rare interventions tend to come from non-readers so enraged by the callous disregard for human life that they wished to go on the record to oppose it.

As disturbing as these comments are, they stem from a mentality which has now made it into 10 Downing Street.

During the recent Conservative Party conference, Theresa May and her government outlined such punitive measures against foreign-born residents of Britain and those who wish to come here that even UKIP thought she’d gone too far. Let that sink in for a moment.

In some ways she’s gone far beyond what we would have done.

I personally think that is a step too far, and is rather, sort of, petty, just as this recent story that academics at the LSE shouldn’t advise on Brexit.

Britain’s bigotry problem did not begin with The Daily Mail or UKIP. These attitudes are nothing new. But what is new for many in our time is that those who hold such attitudes are unconstrained by the 90s and noughties consensus that outward bigotry was socially unacceptable. What we are now seeing is the unleashing of long-held but previously less visible racism and xenophobia – and as scary as that is, it is also an opportunity. It is an opportunity to have this argument out in the open. We should take that chance.

– Find out some interesting and practical ways you can help fight racism here.

– Read more from The Canary on refugees and the migrant crisis.