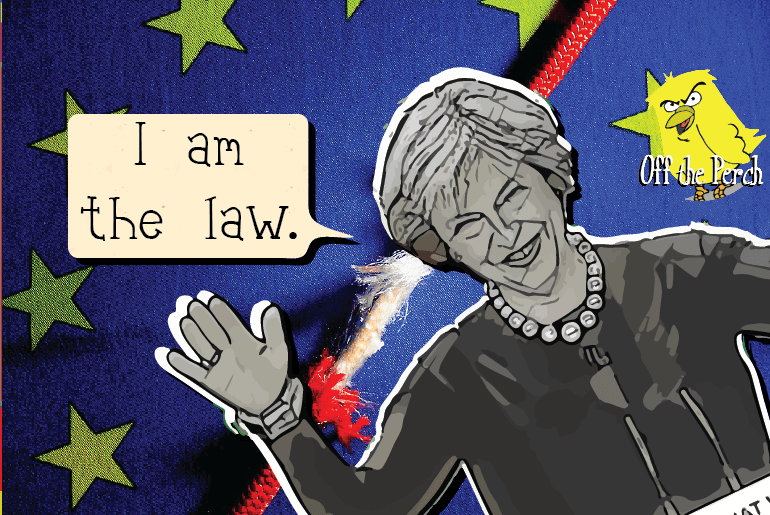 People who strongly believe that we should stay in the EU were pleased to discover that David Cameron’s government officially declared that referendums:

Theresa May was quick to respond to this, however, by explaining that she is:

And that her government will:

Do whatever we like for as long as you bottom-feeders keep voting for us.

If I could smother you all to death in used nappies, I would. God, I hate you.

At this point, an aide informed the PM that we were not one of the rent-a-plebs that she hires to vent all of her prole-hatred on. And we promptly ran off before she could make good on her threats.

We asked our local newsagent if he had a good analogy to further explain this point, and he provided us with the following:

Imagine if you were an ape living in an ape house with a load of other apes. Life for you was essentially okay, although the head ape had a habit of pilfering your bananas and just generally being a d*ck. Largely, this d*ckishness involved him flinging his faeces everywhere and then blaming the meerkats in the adjoining enclosure – even though you’d patently all seen him do it.

Okay, so now imagine that one day this head ape said that if everyone formed a giant pyramid, he would be able to escape from the enclosure and get access to the banana store. From there, he would liberate all of the bananas and throw them down to you.

Of course, what he actually does is eat them all by himself, poop them all out, and then throw the poop down at you. And in case you missed it, the bananas in that analogy represented democracy. The moral of the story being that you should never trust a blatantly untrustworthy ape.

They are the law