Theresa May just tried to bullsh*t her way out of protecting the NHS, but Jeremy Corbyn was having none of it [VIDEO] - Canary Workers’ Co-op 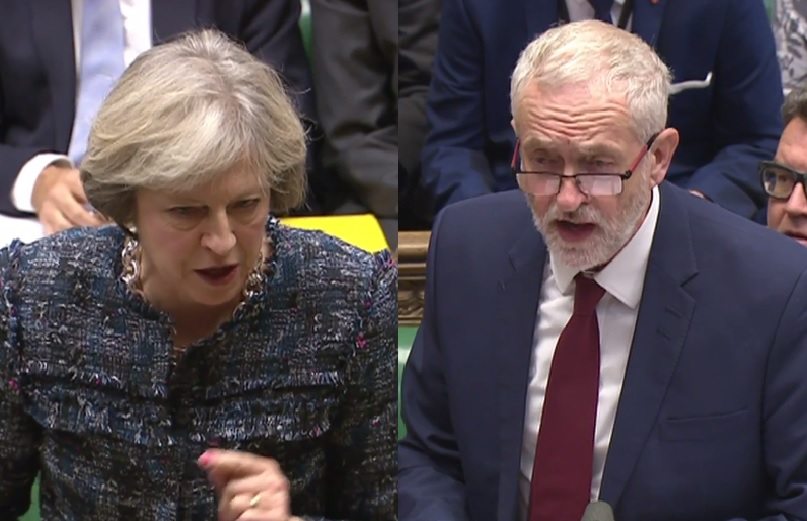 During Prime Minister’s Questions (PMQs) on 19 October, Theresa May refused to promise protection for A&E facilities in the NHS, and attempted to justify why. But she actually used an argument against ring-fencing those services which was identical to the one her party used for its transformation of the NHS as a whole. And Jeremy Corbyn didn’t let that hypocrisy go unnoticed.

At PMQs, the Labour leader asked the Prime Minister about A&E services, saying:

Next month, Mr Speaker, Sustainability and Transformation Plans are going to be published. Many all over the country are quite alarmed by this because of the threat to accident and emergency departments.

Can the Prime Minister deal with this issue now, by quite simply saying there will be no downgrades and no closures of A&E departments in this statement coming out next month?

Corbyn referenced plans introduced by the Conservative government. Under the proposals, the NHS has been carved up into 44 regions, known as ‘footprints’. These ‘footprints’, or ‘networks’, have to create a ‘Five Year Forward View’ that sets out how they will bring themselves into financial balance by 2017.

‘Footprints’ that don’t succeed in creating financial balance will be cut off from access to money from other funding streams. So they have a serious incentive to do so. And it is the pressure to create this balance that could force A&E departments to close.

No top-down orders, you say?

May avoided answering Corbyn’s question. But she claimed her party had put “a record level of investment” into the NHS. And she identified how the Tories’ approach to the NHS differed from Labour’s:

To that statement, Corbyn responded:

Wow. Wow, Mr Speaker. Well, top down is what we got. And it cost £3bn for a reorganisation that nobody wanted at all.

The Labour leader’s reaction hit the nail on the head. Because the very reason the Sustainablity and Transformation Plans exist is due to the Tories’ top-down reorganisation of the NHS. In fact, since the Conservatives took the reins of government, there have been two top-down reorganisations of our health service. Firstly, through then Health Secretary Andrew Lansley’s 2012 Health and Social Care Act. And secondly, through these latest reforms.

Is the NHS safe in May’s hands?

Yet all this top-down reorganisation seems to have achieved is bringing the NHS to the brink of financial collapse; and fragmenting the service while private companies get rich off the pieces. The government has even managed to alienate the workers that keep the NHS afloat by forcing contracts onto junior doctors and stripping nurses of their bursaries.

And alongside the concern over competence, there is a trust issue. May’s response to Corbyn’s question illustrates her willingness to deceive the public. Clearly, the Tories do believe in top-down reorganisation, or they wouldn’t have done it themselves. But when faced with an opportunity to use it as a political football against Labour, she claimed her party believes the opposite.

Our NHS deserves better than that. And that’s surely something almost the entire country would agree on.