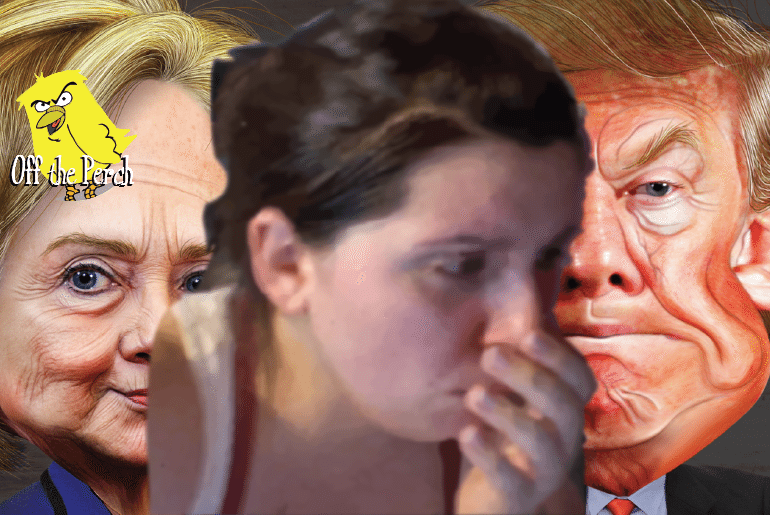 Election fever has well and truly hit the US.

With a baseball bat of repulsiveness and deceit.

Over and over again.

And now, in an unpredictable political environment, this head-bashing is having an entirely predictable result… Widespread vomiting. (And headaches, of course.)

This isn’t a joking matter, of course. The American people are actually stuck – like a well-fed rat trying to get through a plughole full of hair – in a tragically vicious cycle of undemocratic democracy. And the horrific black-and-white choice US elites have given to voters in the upcoming presidential election is simple. They can either have a billion-dollar wax manifestation of race-baiting misogyny which regularly releases offensive gases, or a political chameleon which miraculously transforms into a war hawk when no one’s looking. An attractive choice, we know, but for some reason it has sparked more illness than enthusiasm among the US public.

Not since the Cold War between Coca-Cola and Pepsi in the 1980s has the great US advertising machine subconsciously forced Americans to choose one type of sugary excrement-juice over another in such a shamelessly open way. And much like that infamous battle, voters today have the unenviable task of deciding which corporate giant – red or blue – will make them slightly less ill.

One child summed the sorry situation up perfectly:

Will the world be there for the US in its time of need?

The election-related vomiting in the US has now attracted the attention of the World Health Organization (WHO). In between severe bouts of uncontrollable physical repulsion, aid groups told the WHO what was happening. As a result, it has been assessing the situation in recent days.

Whatever the outcome in the upcoming elections, the WHO fears, the vomiting is likely to continue. If Hillary Clinton gets into power, it says, the best option to stop her wargasms causing greater illness will be for citizens to mobilise in force and make sure her affair with militarism bears no fruit. If Donald Trump becomes president, meanwhile, the toxic political environment will not only result in potentially fatal brain damage, but will probably also transform into an actual toxic environment. So there’ll probably be some sort of political lurgy either way.

The WHO says that, without action to upend the painfully plutocratic system which believes Clinton and Trump are the best America can do, the vomiting epidemic will not end any time soon. So please spare a thought for the American people the next time you’re throwing up the contents of your stomach.

– See some real news about Donald Trump, Hillary Clinton, and the US elections at The Canary Global.