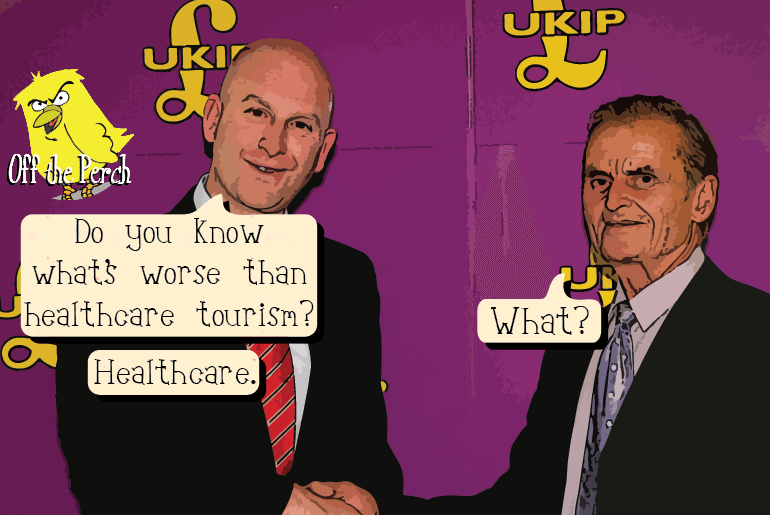 And so UKIP has appointed a new leader. Or at least it has for the next few days anyway. A joke which everyone is frantically trying to make before he actually quits and Farage has to re-re-return.

The new leader is Paul Nuttall, a man who is predicted to do well with working class northerners. As a working class northerner myself, I’d personally rather vote for a robot that was solely designed to shoot electronic tasers at my ****. But the voting figures for the EU referendum do seem to back up this potential groundswell of support. Especially as it’s becoming increasingly clear that Brexit is going to be the key/only topic of interest in UK politics for the next decade or so.

But what are his opinions on that thing which all UK citizens need? Unless of course, they’re rich. Or ‘elite’ if you will. That said ‘thing’, of course, being the NHS.

Meet the new bastard, the same as the old bastard

Nuttall has historically made himself incredibly clear on the NHS. Although he’s since deleted the post. Probably because the likes of Farage and himself have yet to persuade voters on the issue. By which I mean they’ve failed to get in power and force it on people whether they like it or not.

Well, fair enough. It’s clear that privatisation works to give everyone a better service. Just look at… Southern Rail… or the energy companies… and all that they charge in return for this wonderful improvement is considerably more money than before… and… oh… oh no… oh God no!

To assess whether privatised healthcare could ever be a good thing, Off the Perch spoke to an expert in the field – one Grant Reaper (GR):

OTP: So privatised health care – they still have that in America, right? Doesn’t it mean that a lot of people can’t afford to be treated? Or that people end up indebted for life? And that somehow, despite all that, the American system still falls behind countries with social health care anyway?

OTP: Are you suggesting that healthcare professionals need rivalry to motivate themselves to prevent people dying?

GR: Well, yeah – obviously. Why else would they care?

OTP: You’re not human, are you? But forgetting that, won’t privatised health care mean that the best practitioners charge the most? And that the poorest patients will be catered for by cost-cutting chancers?

GR: Okay, sure, if you go into detail, it doesn’t look good. Which is why we just repeat phrases like ‘driving competition’ and ‘choice’. Because it gives people the impression that they’ll be the ones choosing. And not that care providers will be given a choice of scam-heifers. Sorry, did I say ‘scam-heifers’? I meant customers.

GR: And don’t forget the ageing population. Like Paul Nuttall himself pointed out. Privatisation will take care of them in an instant.

You only need to know one thing about UKIP’s new leader, Paul Nuttall: he wants privatisation in the NHS. RT now.pic.twitter.com/UUrMOHyjT9

OTP: How will privatisation take care of ageing patients?

GR: You get that I’m using ‘take care’ in the figurative sense, right?

OTP: Ah, so you mean privatisation will save us money by pricing elderly poor people out of existence.

Unless of course you’re ready to fully embrace post-sanity politics, and say that the NHS is elitist, PC, and health and safety gone mad.