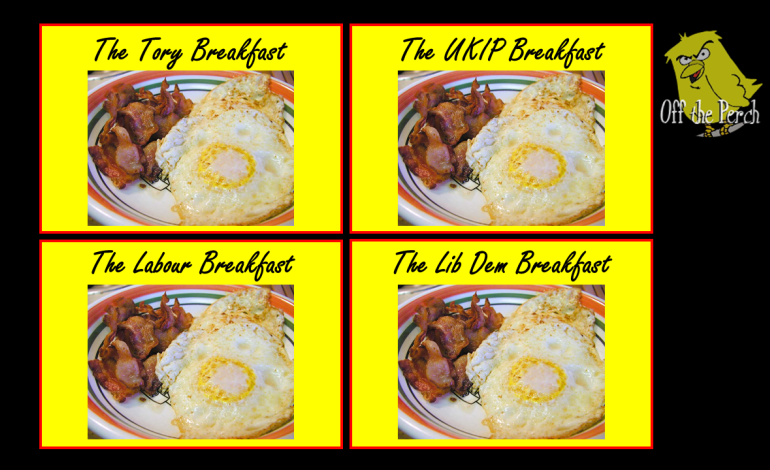 It’s official. UK politics have all but ceased to concern everyday matters, or a range of policies/attitudes. No longer are they a complicated mire of subtleties and compromise; what one might describe as Fifty Shades of Grey (but without the leather and gimp masks). Now it’s arguably more Four-and-a-half Shades of Shit-stain. Because party alignment is now about one singular issue.

(One hopes the British public didn’t experience the same confusion at the voting booth.)

We do like the analogy, though. A greedy, neoliberal, greasy-spoon owner has decreed to his staff in the ‘bollocking room’ at the back of the kitchen:

Don’t let the customers concern themselves with anything else. They all get semi-cooked breakfast, right? Set menus only.

The staff (our politicians) have panicked. They have scattered like bemused lemmings, fearful at the proposition of losing their own employment as gatekeepers to our bacon and eggs. So they’ve humbly done as decreed, and scrapped pretty much everything else on the menu.

If you want smoked salmon, you can just bugger off somewhere else, buddy.

Our metaphorical menu, in this geopolitical ‘cosmic diner’, now looks something like this:

(CUSTOMER NOTICE: Many customers who previously chose this breakfast might now prefer the Lib Dem option.)

(NB: the salad is also 70% squirrel meat. It loves the CIA, arms dealing, and was found sitting on a fence somewhere.)

So basically, we’re all getting variations of the same slop. And many of us are simply gonna puke. Deal with it.

The illusion of choice

Three out of four main political parties want to continue tipping Britain off a cliff. The only one that doesn’t is the one that got all-but wiped out at the last election. The one most would argue has even less chance of leading a government than Labour. (In fact, they’ve probably got similar chances of growing gills and metamorphosing into amphibious mer-folk.)

Any deviation from the traditional three-party voting could result in Fuhrage’s brigade garnering even more supposed ‘respectability’. Nigel’s now got his own show on LBC, after all. That which was once deemed revolting has somehow become a viable, tasty snack option.

Yes… OK, if you really look, there are a couple of other options on the menu. There’s even a vegetarian ‘Green’ option. But it’s in a really small font, and consists of mostly lettuce. And if you eat only lettuce, you are unlikely to have the energy reserves to get up the stairs.

Anyone might think they’d already decided what we’re eating.