As PMQs returns, the Tories must be breathing a sigh of relief that 2016 is over [VIDEOS] - The Canary 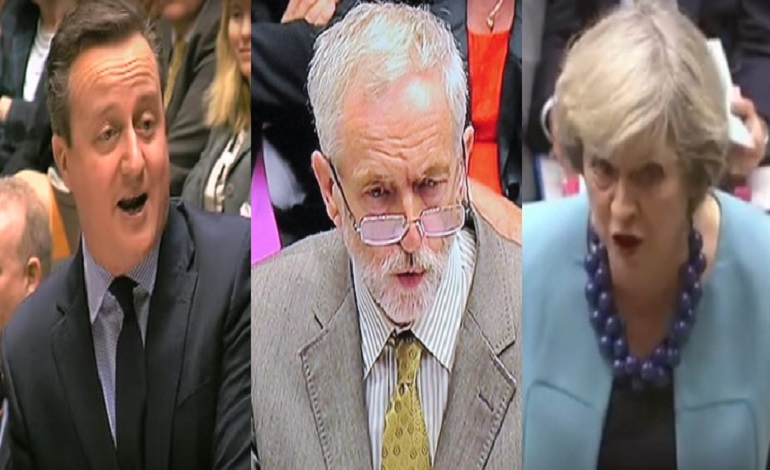 Prime Minister’s Questions (PMQs) returned on Wednesday 11 January. And 2016 was quite a year for Jeremy Corbyn at PMQs. The Labour leader asked David Cameron and Theresa May 198 questions in all. And he often had them on the ropes. So here’s The Canary’s round-up of some of Corbyn’s best moments from 2016.

Corbyn rang in the 2016 New Year with an ‘annihilation‘ of former Prime Minster (PM) Cameron. On 13 January 2016, the Labour leader used his six questions to push Cameron on the UK housing crisis. As The Canary’s Editor-in-Chief Kerry-Anne Mendoza commented:

Corbyn stayed on the issues and clearly surprised the PM with a series of sharp, targeted and stinging attacks, for which Cameron had no answer… The PM looked visibly uncomfortable, shifting his weight about and appealing to his benches to support him with a backing track of yah-boo hysterics.

The Labour leader probed his opposite number on the demolition of ‘sink estates’. But Cameron had no answers when questioned by Corbyn. On anything. And, as 2016 showed, the government has had no answers, generally, on housing. As the crisis across the UK deepened:

As spring sprung in March, there were no green shoots of new ideas from Cameron’s bench. On 2 March 2016, Corbyn probed him on childcare and education. And he left the former PM, as The Canary put it at the time:

mindlessly replaying his favourite buzzwords: our so-called “strong economy”. It is a strong indication that Cameron does not have faith in his own answers if he needs to repeat irrelevant generalities each time Corbyn questions him.

Corbyn rightly pointed out there is a crisis in education, with headteachers spending £1.3bn on agency staff in 2015. And since then, things have got worse. Children and parents have gone on strike over SAT tests. The government has shut more Sure Start centres than ever before. And Labour’s Shadow Education Secretary, Angela Rayner, said the Conservative government had overseen “six years of turmoil in our schools”. The future under this government is looking bleak for children:

The subject of education came back to haunt the new PM, Theresa May, during last year’s Indian summer. On 14 September, during a particularly sizzling PMQs, Corbyn nailed May on her grammar school plans. Not wanting to mess about, the Labour leader immediately hit May with:

I want to congratulate the Prime Minister. She has brought about unity, of Ofsted and the teaching unions. [May] has united former education secretaries on both sides of the house. She has truly brought about a new era of unity in education thinking. I wonder if it’s possible for her… to name any educational experts that back her proposals on new grammar schools and more selection?

The PM was unable to name any. Corbyn’s decimation of May continued, with the PM following in Cameron’s footsteps. Unable to answer a single question coherently. Corbyn’s performance was such that even The Telegraph declared it a win, saying Corbyn “pummelled” May on grammar schools:

In a pre-Halloween PMQs, frightening events took place. May’s performance on 26 October was so bad that even the BBC‘s Laura Kuenssberg was forced to admit how terrible it was. Corbyn was probing the PM on Brexit. Specifically, on what exactly her plans for it were. But May repeatedly dodged and gave vague answers about the issue. She said that she wanted the UK to have access to the single market while controlling immigration. But the problem with this is the two are mutually exclusive.

May’s performance was so dire, Kuenssberg was forced to say:

But we also learned, and I think we’re really starting to learn this every single week, that Theresa May is a class act at not answering the question.

Not a very Merry Christmas for May

And on the final PMQs of 2016, Corbyn pulled out all the stops. He savaged the government’s record on social care, which many believe is causing, in part, the current NHS crisis. Corbyn pointed out that councils were suffering from 40% cuts to their budgets. That the government’s increase in council tax to fund social care “wasn’t enough”. And that May could cut corporation tax to meet the social care funding shortfall. All of which fell on deaf, Tory ears:

Corbyn, perhaps, best summed up the whole of 2016 in his final exchange of the year with May. He said of the social care crisis:

The crisis is made in Downing Street by this government.

It would be fair to say that the government in Downing Street has made most crises currently facing the UK. Be it education, housing, social care, the NHS, children’s services, or prisons. But May, like Cameron before her, has a habit of dodging Corbyn’s difficult questioning at PMQs. If the PM is going to run with that theme in 2017, Corbyn will need to keep getting his questions spot on.

– Read more from The Canary on PMQs.