We're all used to anti-Corbyn bias, but this time the BBC has taken it way too far - Canary 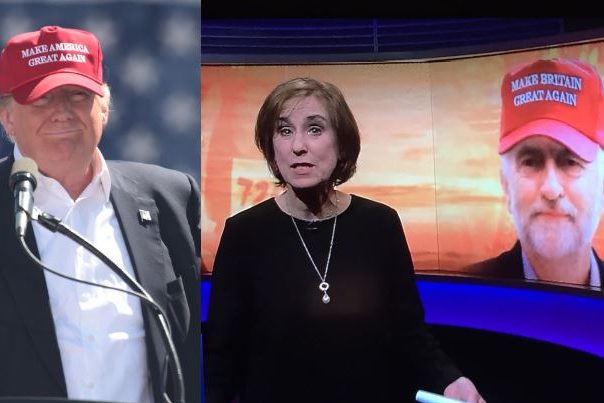 While some have argued there is a tendency for his supporters to jump at shadows and ‘cry wolf’ concerning anti-Corbyn bias, anyone who watched BBC Newsnight on 10 January would be hard pushed to deny quite how much the programme has it in for him. The whole programme was slanted to make a mockery of the Labour leader, and to paint him as Britain’s answer to Donald Trump.

Not a computer game

From the top of the programme, the BBC took the decision to superimpose a red American baseball cap onto the Labour leader’s head. The exact same one worn so prominently by US President Donald Trump, but instead of ‘America’, the cap was adjusted to read ‘Make Britain Great Again’. The manipulated image was then used as a backdrop for much of the programme, in an apparent attempt to portray the two men as being somehow ‘the same’.

Even though they hold entirely different political views.

It’s a comparison Corbyn himself recently described as “more than slightly bizarre” on Good Morning Britain.

And some viewers were rightly stunned:

Who the hell thought a photoshopped pic of Corbyn in a Trump cap would make for a balanced & fair #newsnight? @iankatz1000 @BBCNewsnight

The BBC, apparently unaware of the irony, even ran a segment later in the show on the moral/ethical implications of films using CGI to represent/manipulate the image of deceased actors.

Supporters, thinktanks, newspapers, and even academic institutions have all previously drawn attention to the ongoing smear campaign Jeremy Corbyn faces. Both in the media, and the political establishment. Even within his own party. But the onslaught also applies to anyone who dares fight his corner, as demonstrated by Kirsty Wark’s interview with respected Labour peer Shami Chakrabarti.

Chakrabarti is the Shadow Attorney General. She has been described as “probably the most effective public affairs lobbyist of the past 20 years” and “an undaunted freedom fighter”. She was the director of Liberty for 14 years, and played a key role in the Leveson Inquiry. Initially independent, she joined the Labour Party and became a member of the House of Lords in September 2016.

The BBC began the programme describing Corbyn’s policy announcements as “dead in the water”. At various points in the interview, Wark is seen impatiently waiting for an opportunity to pursue her own slant. At one point, Chakrabarti sighed with exasperation:

Wark deluged the Labour peer with criticisms, but the BBC host failed to acknowledge any points made in response. Such as, while it’s all very well for the media to lambast Corbyn’s Brexit strategies, it’s the Conservatives who are in power.

#newsnight Kirsty Wark was embarrassing. She was talking about Corbyn as if he was a serial killer, not someone who wants a fairer society.

The anti Labour, anti Corbyn rhetoric from the bbc's #Newsnight just been cranked up. You never see them interview a Tory like that.

Wark even criticised Corbyn for ‘dodging’ the growing NHS crisis with Brexit policy announcements, while “his campaigns director Simon Fletcher was tweeting all day about the crisis in the health service”.

Corbyn was one of the first politicians to speak about that crisis, urgently calling on the Prime Minister to address the issue only a few days beforehand. Whereas Theresa May, the actual Prime Minister, specifically ignored all such requests.

You’re talking to me about spin. Jeremy spoke from the heart about values and about vision, and I think if you give him the chance and let him speak directly to his audience, that will go well.

Kirsty looked absolutely gutted that Caroline Flint wouldn't attack Corbyn. Made #Newsnight look like the Tory propaganda merchants they are

Instead, Flint ignored Wark’s priming for negativity and commented:

Well I actually take a lot of positives actually, from what Jeremy had to say today.

Corbyn is undeniably in a difficult position. Of all the major political parties, no membership is likely to be as split regarding their stance on Brexit as the Labour Party.

As much as many supporters might be disappointed by his decision to back Brexit, one could argue he is simply attempting to navigate the best way forward within already determined parameters. If Labour were just the “party of protest”, as they’re often accused of being, they would be following suit with the Lib Dem policy of trying to repeal the UK’s exit from the EU. Yet from the pro-Brexit side, he is simultaneously criticised for not prioritising immigration over the single market. He cannot win either way. But one thing he does astutely recognise is that an attempt to overturn Brexit could potentially result in major civil unrest.

So as ever, Corbyn is guided by trying to do what’s best for marginalised people of Britain. Whether you agree with his position or not, it’s clearly the reason he’s more concerned with economic repercussions of Brexit and access to the single market than rigid opposition to freedom of movement. Which is perfectly in keeping with the principles he’s voiced all along. Neither scandalous, nor difficult to understand.

Watch the whole interview below:

– Support The Canary, so we can keep bringing you news that matters.