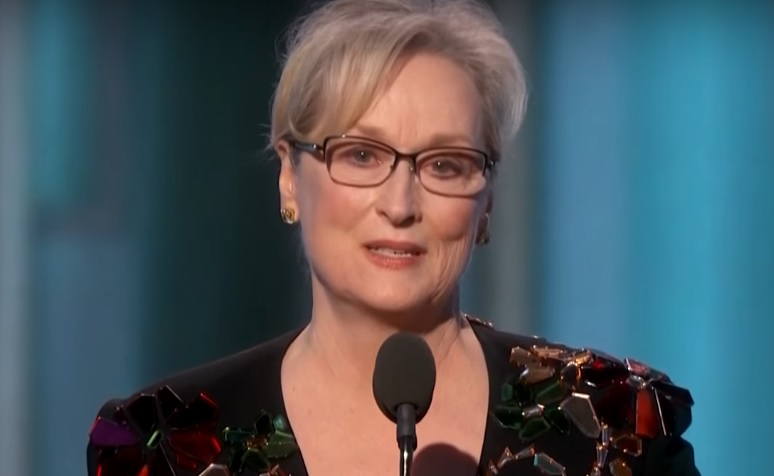 At the Golden Globe Awards on 8 January, Meryl Streep turned her attention to US President-elect Donald Trump. The takedown has since gone viral. And it wasn’t long before Team Trump hit back.

In her acceptance speech for the Cecil B. DeMille Award (given for “outstanding contributions to the world of entertainment”), Streep said:

…there was one performance this year that stunned me… It was that moment when the person asking to sit in the most respected seat in our country imitated a disabled reporter. Someone he outranked in privilege, power and the capacity to fight back… And this instinct to humiliate, when it’s modeled by someone in the public platform, by someone powerful, it filters down into everybody’s life, because it kinda gives permission for other people to do the same thing. Disrespect invites disrespect, violence incites violence. And when the powerful use their position to bully others we all lose.

The speech has now been seen millions of times:

Streep was referring to the following 2015 speech in which Trump appeared to mock a disabled New York Times reporter:

President-elect Trump soon said that, while he had not seen Streep’s speech, he was “not surprised” that “liberal movie people” had criticised him. He then tweeted that Streep was “one of the most over-rated actresses in Hollywood”, and a “Hillary flunky”. And he insisted:

For the 100th time, I never “mocked” a disabled reporter (would never do that) but simply showed him “groveling“…

Incoming White House counsel Kellyanne Conway, meanwhile, tried to deflect attention away from Trump by questioning why Streep had not spoken about the recent torture of a mentally disabled person on Facebook Live. In a CNN interview, she feigned praise for Streep’s defence of disabled citizens but then asked:

why didn’t she use that platform to talk about the mentally challenged boy…?

Because one of them was done by a bunch of miscreants. The other one was done by the president-elect of the United States.

Pro-Trump Breitbart – famous for its racist, sexist, and antisemitic headlines – soon rallied to the President-elect’s defence, too. It said:

During a 2015 rally, Trump did an impression of a flustered person, in this case New York Times reporter Serge Kovaleski, when he flapped his arms and pretended to act agitated. He has done the same, flustered impression of able-bodied people as he did of Kovaleski, whose wrists are “locked in place” due to a rare, congenital disorder. During the same speech, Trump also did the impression again while talking about an Army general’s thoughts on ISIS. Videos of Trump mocking himself, Republican primary rivals such as Texas Sen. Ted Cruz, and others while waving his arms around are easy to find, yet the media pretends they don’t exist.

Four more years of this?

Streep’s speech went down well with many Americans, though. Twitter users soon mocked Trump’s ‘overrated’ response, for example. And others in the acting world also backed Streep up.

how he reacts and how he has the need to talk back and insult anybody who doesn’t agree with him, that’s pretty disgraceful… Why isn’t he sitting through briefings rather than tweeting this nonsense?

I don’t know how we’re going to take four years of this.

But Streep herself actually answered this question in her speech, stressing:

We need the principled press to hold power to account, to call him on the carpet for every outrage… join me in supporting the Committee to Protect Journalists, because we’re gonna need them going forward, and they’ll need us to safeguard the truth.

Many American voters somehow managed to look past signs of fascism, racism and misogyny in Trump’s presidential campaign. In fact, the US far-right clearly relished them. And as Streep said in her speech, Trump’s “instinct to humiliate… filters down into everybody’s life, because it kinda gives permission for other people to do the same thing”. So no matter how much the President-elect softly distances himself from the horrific acts of some of his supporters, the fact is that his frequently unstatesmanlike behaviour does have an impact.

To limit that impact, America and the whole world must never forget Trump’s shameful electoral campaign. And they must do their utmost to keep holding him to account.