Pool party at Mar-a-Lago! With only the very best people! - The Canary 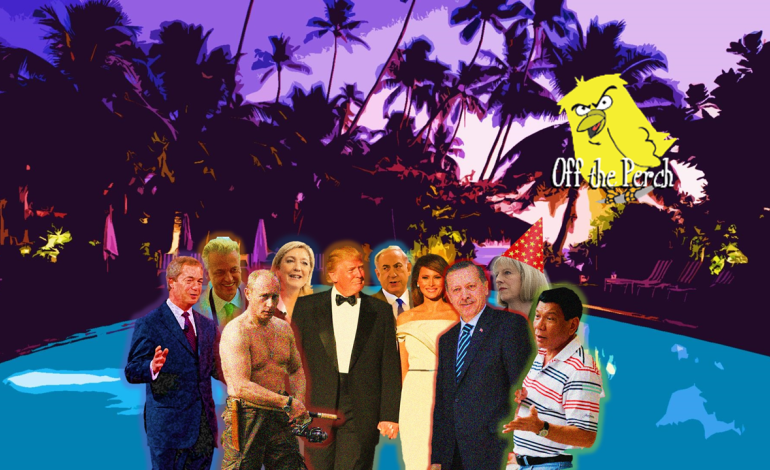 When it comes to catering to some of the very worst humanoid sick-puppets in existence, Donald Trump is one of the very best. And his ‘Weekend White House’ – the palatial estate of Mar-a-Lago – is where he does all that catering. (By ‘he‘, of course, we mean his underpaid foreign employees.)

And what better way for Trump to inaugurate Mar-a-Lago as the official sinkhole of US dignity than to invite his very favourite foreign dignitaries to an extravagant pool party.

We won’t go into detail about why the people Trump invited are so horrendous. That’s not our mandate at Off The Perch. But let’s just say that if cockroaches were going to have a post-apocalyptic block party, these people would be the ever-lovely mixture of spilled beer, urine, and vomit left on the floor at the end of the night.

In all fairness, Trump did invite some of the cool kids to his party. Just none of them wanted to come. They mentioned something about bigotry and misogyny. And other words that Trump didn’t really understand. But he has a tiny attention span. So he’d already turned his attention to inviting the only international politicians who weren’t disgusted by his words, views, or actions.

Over at Mar-a-Lago, Trump set about welcoming his guests. Illustrious nationalist war-junkies like Recep Tayyip Erdoğan, Benjamin Netanyahu, and Rodrigo Duterte. And arriving fashionably late (in a lowrider blasting out Wagner’s Ride of the Valkyries) were Vladimir Putin, Shinzō Abe, and Narendra Modi.

Theresa May was on the sidelines somewhere, too. But it seemed she’d been expecting a different kind of gathering. Because she had a party hat on. And she’d brought an assortment of popular 80s board games with her.

When it came to actually entering the swimming pool, though, disaster struck. There were fish in the pool! Probably because of the toxic waste Trump had dumped in a nearby river. Or maybe because he’d thrown some tacos into the pool earlier on in a tantrum about Mexico refusing to pay for his wall.

Either way, there were fish in the pool. So Trump immediately convened a makeshift situation room, organising the pool’s sun loungers in a circle. And his guests were quick to propose ‘solutions’:

Duterte: Send the army. Wipe them all out.

Putin: Maybe we poison? Maybe no. Who is to say?

Erdoğan: No need. We call them sharks. Arrest them. And put in tiny fish bowl. Then, they obey.

Netanyahu: Or we do all of that? And we napalm the fishbowl if they try to escape.

Theresa May: **gulps, shrugs, and shifts eyes from side to side** Erm… Brexit?

Pool party at Mar-a-Lago! It’s the way of the future… apparently…