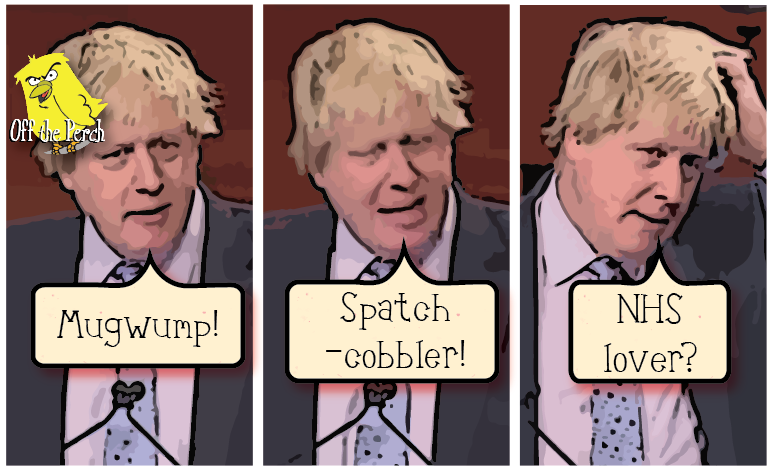 Just when we thought Boris Johnson had been sidelined, Mr ‘£350m-a-week’ came bumbling back. This time barraging Jeremy Corbyn with a deluge of words so expensive that only an Etonian would have the disposable income necessary to utter them.

The first insult came when Johnson called Corbyn a “mugwump” in The Sun – a newspaper that’s well known, of course, for its predominantly public school audience.

Johnson would later call Corbyn a:

If the cosmopolite in Blighty’s patriotic circumference want transcendental paramount beyond compare, then they need to use this plebiscite to strike a mark for the Conservative Party! These Labour rapscallions are an abominable shower of oiks and commoners who will climb into the old four-poster with Johnny Foreigner at the tip of a panama! And most frightening of all, the monumental majority of them don’t even play polo!

To which many voters replied:

This led to Johnson attempting to assure people he was in touch with the common man. Although he did so by saying:

While people prognosticate that I’m a bit of a verbosely pompous dunderninny, I’m actually incredibly down to terra-firma, and abundantly in touch with my fellow bipeds.

To which many voters replied:

Some voters were worried that Johnson and co might be out of touch with the struggles of most people in the UK. Which is presumably why most Tories have foregone having any personality at all, and are instead just shouting the words “strong and stable” at anyone who will listen.

Meanwhile, Boris gives them all cover by saying things silly enough to distract the media.

Why has @BBCr4today led it's bulletin with Boris Johnson's childish insult of Corbyn? Is that REALLY the most important story in UK today?