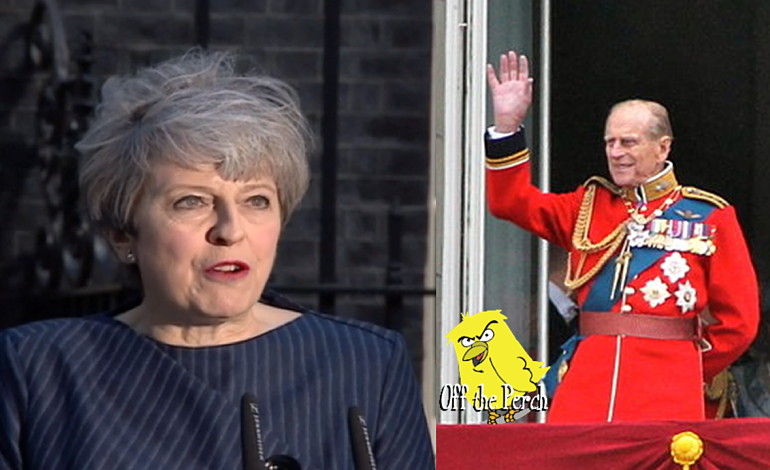 The government has moved to a ‘war footing’ following the revelation that Prince Philip is still alive. Sleepy Whitehall officials were heard muttering: “This is all we fucking need” as the news began to emerge in the small hours.

A source within David Davis’ Brexit department told Off The Perch:

This really has come as a terrible blow. My colleagues are already at their wits’ end trying to sweep up after our Secretary of State. And the PM is hardly helping. Now it looks like the Duke of Edinburgh is still with us, we’re likely to have to do even more fire-fighting. To be honest I’m not even sure if getting him to retire is a good thing or a bad thing. Without all those plaques to unveil, he might have more time for casual racism and accidental international incidents.

It’s thought that many of the duke’s public appearances will be taken on by Theresa May. She’s apparently on the lookout for more heavily stage-managed opportunities at which to repeat her slogans. Prince Philip, meanwhile, is likely to be confined in a room along with local newspaper journalists and most other Tory MPs for the duration of the campaign.

An EU official close to the Brexit negotiations told us:

We’ve always tended to use Prince Philip as a baseline for our expectations of British diplomacy. That way, anyone else is normally a pleasant surprise. But things have changed. I can certainly see why he would want to quit public life now. He no longer seems distinctive.

The Department for Work and Pensions confirmed Prince Philip would be ineligible for benefits as he made himself intentionally unemployed.