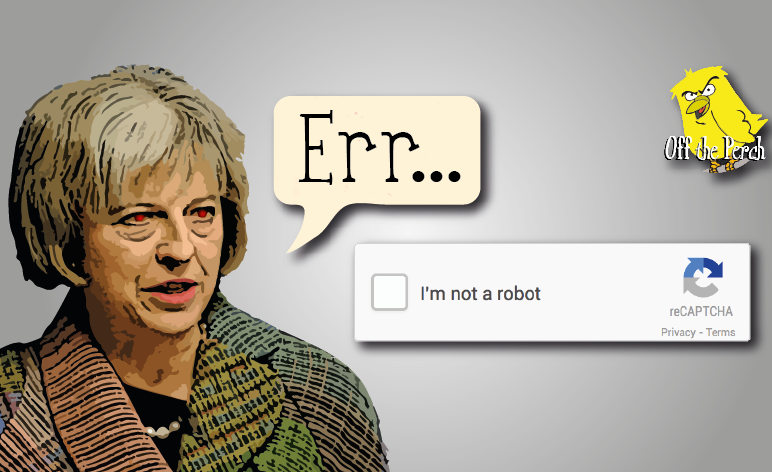 When Theresa May was accused of being a robot, she reassuringly explained:

I am not a robot. ERROR! ERROR! Please insert conscience!

Which was obviously enough for most of us to believe that she was probably human. Or, at the very least, some sort of shabby cyborg.

Her person-status has once more been thrown into question, however, as the PM has shockingly failed to complete an online CAPTCHA test.

I am not a robot

The Prime Minister was setting up a WhatsApp account for herself. Possibly because she needed a method of sending messages without them being leaked. Or maybe because our loyal cash-cows friends in Saudi Arabia needed a means of ordering murder toys defence equipment without attracting too much attention.

When setting up her account, though, May encountered the familiar CAPTCHA test:

Most people would have simply used their mouse cursor to tick the appropriate box. May did not do that, though. She instead stared unblinkingly at the screen for 52 minutes before asking:

Is there something I am supposed to do?

Perhaps even more alarmingly, she then shot eye-lasers at an intern who was delivering the government’s latest unfavourable polling data.

Inane in the mainframe

Claims that May might be a robot go back years. As a former Liberal Democrat junior minister recently revealed:

I heard that May was inhuman before I started at the Home Office, but ‘inhuman’ doesn’t even begin to cover it. Every time the topic of immigration came up, she just shouted ‘EXTERMINATE! EXTERMINATE!‘ and spun around on her office chair. And if you’re wondering why she looked so confused eating chips that time, it’s because when May orders ‘chips’, she expects ‘microchips’.

Found the place where Theresa May forgot how to chips. pic.twitter.com/iBIUi2kkpD

Just because Theresa May is a robot doesn’t mean that she’s unfit to be Prime Minister, though.

Because actually, what makes her unfit to be PM is her rank incompetence, her blustering lack of direction, and her total absence of any moral centre.