May grows a beard to better emulate Corbyn - The Canary 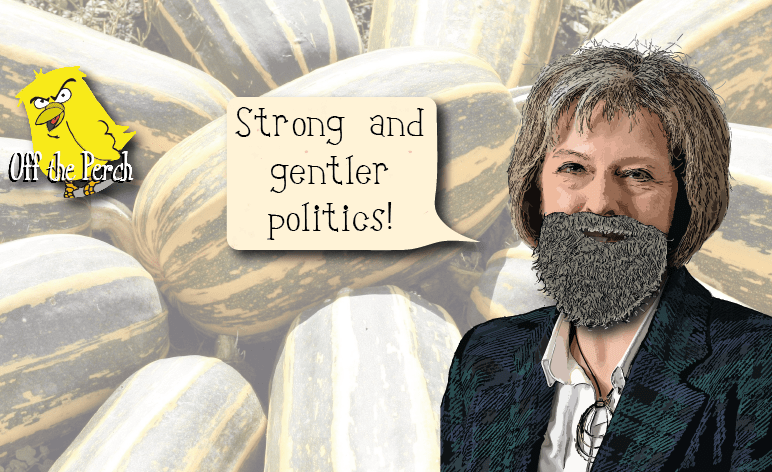 Earlier in 2017, Theresa May made the mistake of thinking she was quite popular. But the more May let her personality shine through, the more people realised she didn’t have one.

She just had soundbites.

And a vestigial Boris Johnson.

There was one politician who seemed to appeal, though. And that politician was Jeremy Corbyn. A politician that May has vowed to emulate.

Theresa May walked on to the stage in an ill-fitting beige suit – an exact match to the one Corbyn wore circa 2015. She was also sporting a fake beard and holding a giant marrow she’d allegedly grown on her allotment. She told the confused Tories in attendance:

Greetings, comrades – it’s me – the absolute girl, Theresa May.

If this last election has taught us anything, it’s that young people don’t want to live lives of debt, misery and hopelessness! So it’s very important we claim to be offering something other than that! For at least as long as it takes us to win another majority!

At this point, May looked around the audience – winking at people. She finished the speech by saying that:

It’s time for a strong and gentler politics!

…before finally flicking the Vs at some war veterans – having wrongly been led to believe that Corbyn did this by The Sun newspaper.

If their lips move…

It later turned out that May’s plan to help young people was a lie. This was obvious, as the pamphlet she handed out titled ‘HELP THE YOUNG’ had the word ‘HURT’ crossed out and ‘HELP’ written above it in biro.

Still, though – the conference wasn’t any worse than last year’s.