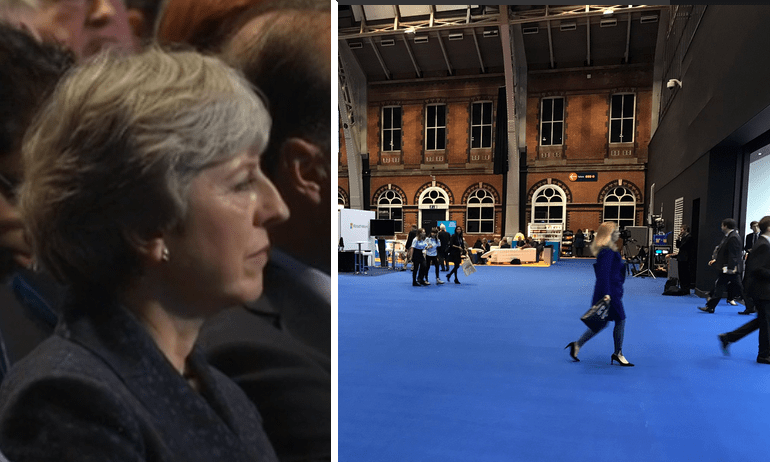 The Conservative conference looks a bit awkward, because barely anyone has turned up. The main conference hall was noticeably empty when Conference Chairman Andrew Sharpe took the stage:

Even Scottish Conservative leader Ruth Davidson couldn’t come close to filling the hall on 1 October. Daily Mail journalist Andrew Pierce was left wondering where everyone was:

Even 4 @RuthDavidsonMSP one of the great Tory stars the conference hall is half empty. Where is everyone

Ruth Davidson speech at #CPC17 was actually half empty pic.twitter.com/7zxawvtwH3

Step away from the main hall, and the conference looks a bit like a ghost town:

I repeat… where the hell is everyone? pic.twitter.com/Kn1c7JCJRY

Even Telegraph journalist Michael Deacon was taking the mick:

If you're arriving late for the speeches at Tory conference, don't worry, still one or two seats left pic.twitter.com/Qf6UIBXAei

Unfortunately for the Conservatives, the conference wasn’t just having a slow first day. Before midday on 2 October, the main hall looked even emptier:

"Why it's not I but Nicola Sturgeon who is out of touch with the common people!" screams David Mundell to an empty room. #CPC17 pic.twitter.com/8bzLGtruHA

The Canary approached the Conservative Party for comment, but had received none at the time of publication.

Today, it’s all changed. The Conservative Party has refused to publish membership figures since 2013, when the figure stood at 134,000. This led Conservative Home to say:

Any organisation that won’t declare a figure has the smell of decay about it. Will 2018 be the year when Tory membership drops to below six figures?

By contrast, Labour Party membership had reportedly skyrocketed to 552,000 by June this year. That’s an increase of around 380,000 since Labour supporters elected Jeremy Corbyn as leader.

Last week, the packed Labour conference seemed to reflect the swelling grassroots support for the party:

Conference hall packed to the rafters for Corbyn's closing speech at #Lab17 pic.twitter.com/cAvWZu39dm

It doesn’t seem so promising for the ruling party. This week, the Conservative conference looks embarrassingly empty. In order to galvanise grassroots support, the party needs an inspiring vision. But even a Telegraph editorial recently conceded that the “momentum in British politics is with Jeremy Corbyn”.