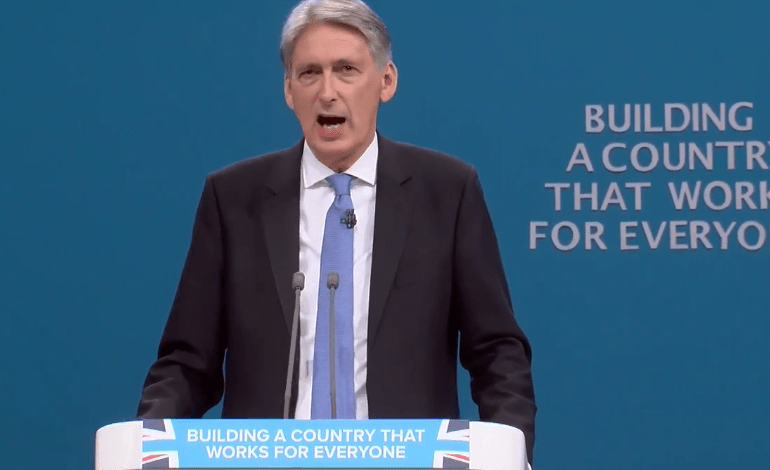 Chancellor Philip Hammond has branded Jeremy Corbyn’s supporters a “mob”, and suggested the movement could wreak “lawlessness” in Britain. In his speech at the 2017 Conservative conference, Hammond seemed to accuse Corbyn and his supporters of “threats”, “intimidation” and “undertones of lawlessness”:

We will not resort to the politics of the mob, to the threats, the intimidation, the undertones of lawlessness that were so menacingly present last week.

Nor will we be cowed by intimidation whether it’s on the streets or online.

By “last week”, the MP for Runnymede and Weybridge seemed to be referring to the Labour conference. But Hammond provided no evidence for his claims that the conference was ‘menacing’:

Some journalists couldn’t quite believe it:

Philip Hammond says there were "undertones of lawlessness so menacingly present last week" at Labour conference. Seriously, what is this

Hammond now talking about the "undertones of lawlessness that were so menacingly present last week." Anyone got a clue what he means?

In the 2017 general election, Labour achieved 40% of the vote. So trying to reduce its leader’s supporters to a “mob”, or Corbyn’s team to a “clique of hard-left extremist infiltrators”, doesn’t really cut the mustard.

Perhaps even worse, though, was a Conservative fringe event on engaging young people entitled [pdf] “How should the Conservative Party tackle intergenerational unfairness”. Private Eye journalist Solomon Hughes reported that the biggest applause went to a 29-year-old in the audience who said young people can’t buy houses because they are too “entitled”. Apparently, young people spend too much on “fake tans”, football “season tickets”, and drinking “10 pints”.

For these Conservatives, it’s young people’s fault that they can’t buy a house. Never mind that people fortunate enough to earn the national average salary of £26,500 still have 91% of England and Wales beyond their income. And never mind that roast chickens would cost £50 if food prices had risen at the same rate as house prices since 1971. A pint of milk would set you back a tenner.

The Conservatives seem increasingly out of touch. Hammond’s speech at the Conservative conference smelt of desperation. The party needs to offer an inspiring vision, not just lash out at the Labour Party. But at present, it looks a lot like a sinking ship.